Reading a text in three languages : The Tribune India

Reading a text in three languages

Exactly 200 years ago, the Rosetta Stone was finally decoded and a key to Egyptian hieroglyphs came into hand 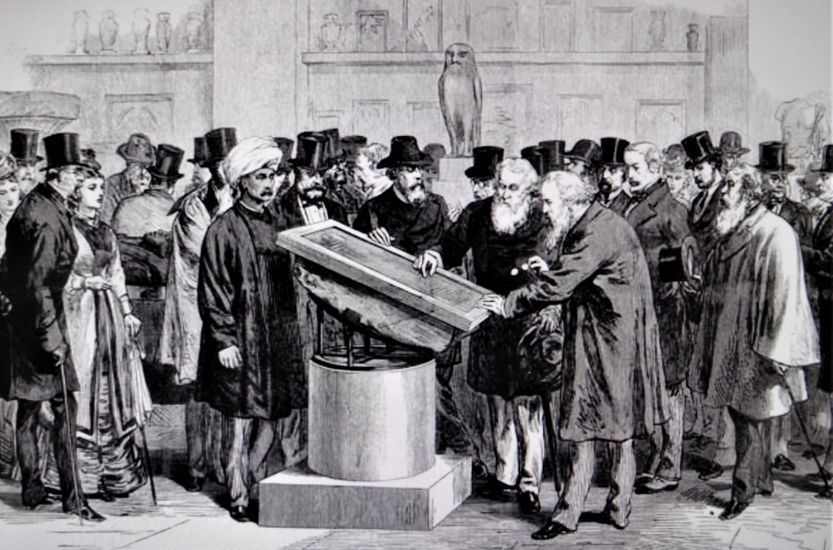 Experts inspecting the Rosetta Stone at the Second International Congress of Orientalists, 1874. An engraving.

Palaeography: Literally, ‘old writing’; also, the study of the handwritings of the past, and often the manuscripts as well, so that they may be dated, read, etc, and may serve as historical and literary sources. — English Dictionary

For many, the icon of the British Museum is the Rosetta Stone, that administrative byproduct of the Greek imperial adventure in Africa. — Neil McGregor

BY now, it may have turned into a byword for an essential key to a new field of knowledge — ‘a clue, breakthrough, or discovery that provides crucial knowledge for the solving of a puzzle or problem’ — but the Rosetta Stone was, of course, a stone, a 3 feet, 8 inch high stele ‘of black granodiorite, bearing inscriptions... found at Rosetta’, erected in the reign of the Egyptian pharaoh, Ptolemy V, close to the end of the 2nd century preceding the common era. The inscriptions, eulogising the deeds and the persona of the pharaoh, ‘the god who maketh himself manifest, whose deeds are beautiful’, were in three parts: the topmost written in the ‘language of the gods’ (which meant Egyptian hieroglyphs), the middle in the ‘language of documents’ (Demotic), and the lowest in the ‘language of the Greeks’.

But this is a mere inventory of facts — dry and precise, not stimulating in any way. And yet, 200 years ago, the Rosetta Stone was at the very centre of great excitement that ran its course from Egypt and France to Sweden and England. In many ways, the excitement has not subsided much even today, for, according to statistics available, it is the single-most visited object in the entire, astonishingly wide-ranging, collection of the British Museum in London where it is housed. Curious crowds keep gathering around it, peering at it, trying to read the texts, taking home leaflets that give its history in detail, buying elegant mouse-pads made in its shape and carrying its text, which the museum shop sells by the hundred each day. This, because 200 years ago, the text on this stele — found by French soldiers campaigning in Egypt under Napoleon, surrendered by them as a spoil of war to the English after a defeat, and sent to London to be presented to the King — was fully deciphered and published, leading to something like an ‘Egyptomania’. Now all those countless inscriptions in Egyptian pyramids and tombs and on artefacts, belonging to a hoary old, nearly opaque, but seductive culture — inaccessible till now because all those records were in the form of hieroglyphs, an entirely pictorial script — could be read. How all this came about makes for a truly fascinating, almost romantic, story.

The stele was not in itself rare for there were so many of them from other reigns, bearing royal or priestly decrees, strewn all over the country of Egypt. One is almost reminded of the way the great Ashoka had his intensely humane edicts engraved on rocks and pillars and erected throughout his vast kingdom. This one by the fifth Ptolemy, however, carried a message of his own glory, almost his deification, for the people of his kingdom to know. Included in the message were ‘facts’: how the 13-year-old pharaoh had given untold gifts of silver and grain to temples; how the flooding of the Nile in the eighth year of his reign was handled with excess waters being dammed for the benefit of farmers; how many dues and taxes had been cut or abolished; how ‘the portions which accrue to the gods from vineyards and gardens over which they had rights under his father’, could remain in their possession; how ‘his heart being concerned with the affairs of his subjects at all times’, numerous benefactions to the Apis and Mnevis and the other animals which are sacred in Egypt had been made. And so on. Finally, of course, came in the theme of the pharaoh’s glory. There was to be ushered ‘the cult of the King’, subjects and priests being ordered to ‘set up a statue of Pharaoh Ptolemy which was to be attended by the priests three times daily’, ‘performing before the image the same rituals they would perform for other gods’.

One can see that there was nothing out of the ordinary in the contents of the decree. What made the stele unique, however, was that the decree was couched in three scripts, two of which — the Demotic and the Greek — could be read with reasonable ease, for the text, it turned out, was virtually the same in both. But the third, the one at the top that was couched in ‘the language of the gods’? It was in the pictorial hieroglyphic script, till now undeciphered and defiant. Quite naturally, and with some excitement, a thought was born: what if its content was also the same as in the other two scripts? Would the name of the King used in three different scripts not offer a clue, perhaps? With this knowledge, or at least possibility, in hand, could the equivalents of all those pictorial signs be found in words? In other words, could the hieroglyphics — whether they were pictograms or phonetic symbols — be deciphered, using this method?

Studies of hieroglyphs had already, from the 9th century onwards, been under way, with an Arabic scholar having made bold attempts. But now those ancient symbols were within reach. Intense rivalries among scholars surfaced, the one between Thomas Young of England and Jean-Francois Champollion of France being the sharpest. That is another story, however, from which Champollion seems to have emerged victorious, for nearly everywhere it is his name as its decipherer that is tagged to the Rosetta Stone. The Greek text had been published in 1803, but it was in 1822 — exactly 200 years ago — that Champollion announced the transliteration of the Egyptian script.

For me, personally, an intriguing question lingers. In an engraving of 1874 showing ‘experts inspecting the Rosetta Stone during the Second International Congress of Orientalists, 1874’, one sees two bearded gentlemen poring over the Stone while, at the other end of the display, facing them, stands a very Indian-looking figure: clean shaven but for a moustache, wearing a long achkan, heavy turban on the head. Who is he, one wonders: Bhagwanlal Indraji (1839-1888), the brilliant Indian archaeologist, pioneer of Ashokan studies, discoverer and reader of countless inscriptions, and recipient of an honorary doctorate from the Leiden University?