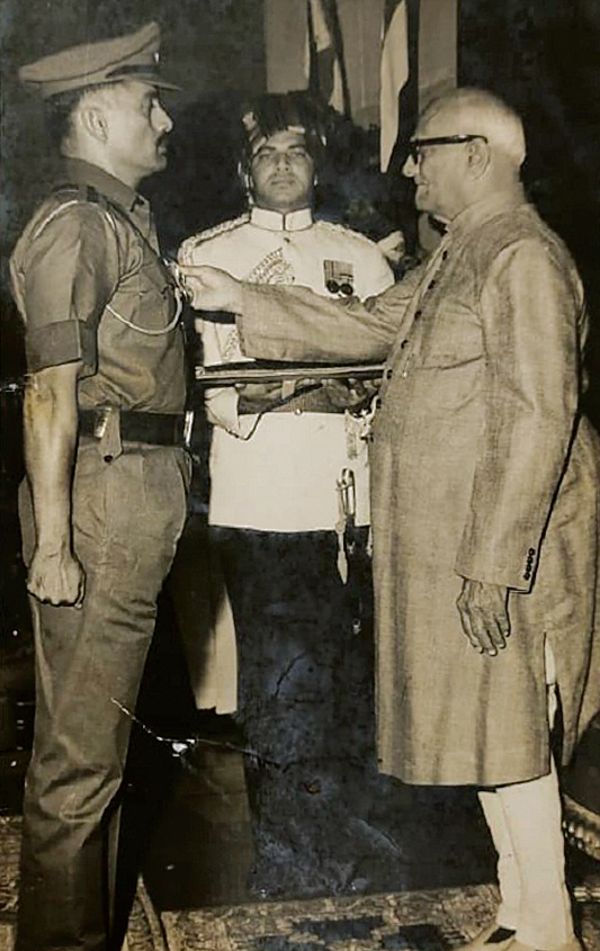 During Operation ‘Cactus Lily’ on the eastern front, 8 Mountain Division, with 81 Mountain Brigade (10 Mahar, 3 Punjab and 4 Kumaon) and 59 Mountain Brigade (4/5 Gorkha Rifles FF, 9 Guards and 6 Rajput), and some BSF and Mukti Bahini battalions were to operate in the Sylhet district of then East Pakistan. The large area of responsibility, with just two regular infantry brigades, made the task of the Division formidable.

But all the battalions of the two brigades did exceedingly well, with Sepoy Anusuya Prasad of 10 Mahar and Lieutenant Colonel AB Harolikar and Rifleman Dil Bahadur Chhetri of 4/5 Gorkha Rifles winning the Maha Vir Chakras. Both the battalions also added three and two Vir Chakras, respectively, to their roll of honour.

Despite some stiff resistance in the initial stages, the forward movement along the Gobindpur-Munshi Bazaar axis continued, with 3 Punjab clearing all pockets of resistance along the Dhalai river. 10 Mahar and 4 Kumaon, advancing along the Maulvi Bazaar-Sherpur-Sylhet axis, found the going tough since Maulvi Bazaar, a stronghold on the route, was reportedly held by the enemy in strength.

The heavily fortified Tea Factory on the outskirts of Maulvi Bazaar, targeted by 10 Mahar, was strongly held by a company each of 22 Baluch and 91 Mujahid Battalion. Two determined attempts by 10 Mahar were foiled by heavy automatic fire from enemy machine guns located at the house of the factory manager, resulting in unimaginable casualties. At that critical moment, to stop any further casualty, Sepoy Anusuya Prasad of ‘C’ Company, in a rare display of courage, albeit at the highest cost, set the entire building afire, paving the way for his battalion to capture the targeted objective.

Anusuya Prasad was recruited in the Mahar Regiment on May 19, 1971, the day he turned 18. The young recruit from Nanna village in Chamoli district of Uttar Pradesh (now Uttarakhand) left for the Mahar Regimental Centre, Saugor (MP), for nine months’ training. During the training break, Anusuya had come down to his village to collect some documents, the period in which he was also married to Chitra, who was in her early teens. After just five days as a married man, he went back to the training centre, never to return.

When the war clouds started hovering rather low, the training at all Regimental Centres was truncated and the drafts dispatched to the respective battalions. After six months’ basic training, Sepoy Anusuya Prasad joined ‘C’ Company of 10 Mahar on November 20 at Shamsher Nagar inside the eastern bulge of East Pakistan. And within 10 days, he made the battalion proud by earning the MVC, posthumously, and also becoming one of the youngest awardees.

“Sepoy Anusuya Prasad of the 10th Battalion, the Mahar Regiment, was a young soldier who had joined the unit on November 20, 1971. On November 29, his battalion was given the task of capturing Maulvi Bazaar defended locality. Inside the main defences, the enemy was occupying a well fortified building which dominated the entire area around. At dawn on November 30, the attack was spearheaded by ‘C’ Company of 10 Mahar with its No. 9 platoon in the lead. Anusuya was part of the attacking platoon.

During the attack, the assaulting troops were held up by heavy automatic fire from enemy machine guns. It soon became apparent that the building would have to be neutralised before own troops could close in on the enemy bunkers surrounding it. Since it was not possible to call for air support or artillery fire due to the close proximity of own troops, it was decided to send a daredevil squad to get into the enemy defences by stealth and set the building on fire. Sepoy Anusuya Prasad volunteered and taking a few phosphorous grenades, with utter disregard for his personal safety crawled towards the enemy position. During the process, he was shot in both his legs but this gallant young soldier did not abandon his mission. He succeeded in crawling up to the building, selected it as his target and started crawling towards it. While doing so, he received a machine gun burst in his shoulders. Undeterred by his wounds and though bleeding profusely, he crawled up to the room with great difficulty and lobbed the grenades, setting the building on fire before succumbing to his wounds.

His gallant action forced the enemy to abandon the building. In this action, Sepoy Anusuya Prasad, in spite of his young age and inexperience, showed outstanding courage, with utter disregard to his personal safety and made the supreme sacrifice in the call of duty.”

The capture of the Tea Factory has gone down as one of the toughest battles fought by any infantry battalion in the eastern front.

The hard slogging match decisively won by 10 Mahar was played on November 30, three days before the declaration of war. Along with one MVC, three bravehearts, Major Lil Bahadur Gurung, Naib Subedar Mam Chand Sharma and Havildar Budhi Ballabh, won the Vir Chakras; albeit all posthumously.

Chitra Anusuya Prasad, now 63, speaks with pride: “I was merely around 13 when I got married. I remember Anusuya had come down during a break from the training for collecting some documents — this is when we got married. Five days and he went back for the training and went straight to the battlefield. What I received thereafter was a telegram, saying my husband was dead. I could not even read the telegram, forget understanding the severity of it.”

The Veer Nari, who in 2002 started an organisation called Veer Shaheed Anusuya Prasad (MVC) Mahila Samiti in Dehradun, working for women empowerment, adds, “There are just two things I want to do — help to empower other women and visit the place where my husband fought bravely and breathed his last, for which I am still struggling to get a passport.”

4/5 Gorkha Rifles (FF) was one of the infantry battalions on the Order of Battle of 59 Mountain Brigade ex 8 Mountain Division. And for 4/5 GR, the battalion raised just 30 years earlier which fought gallantly in the Burma Campaign during World War II and in all the India wars since Independence, all that mattered was war and the will to emulate the bravery of its predecessors.

Arun Bhimrao Harolikar, the Kolhapuri Maratha, after matriculation from New High School and first year from Rajaram College, Kolhapur, joined the Joint Services Wing, Dehradun, and was commissioned into the 3rd Battalion of the 5th Gorkha Infantry Regiment. Just three months before commencement of ‘Cactus Lily’, Arun, now a Lt Col, took over the command of 4/5 GR.

Like all officers and junior leaders, he was aware that in war every combatant fights his best. But when he notices that his senior is by his side, and in the same dangerous situation that he is in, undeterred, he goes beyond the call of duty, like Rifleman Dil Bahadur Chhetri, Second Lieutenant Hawa Singh Chahal and Rifleman Phas Bahadur Pun of 4/5 GR (FF) did.

During the war, Lt Col Harolikar made his presence felt not just by being with his men in all dangerous situations, but also leading one of the successful khukri charges with the war cry “Jai Mahakali — Ayo Gorkhali”.

In a rare display of spectacular jointmanship, he heli-landed his battalion under fire at the gates of Sylhet where, after landing, his Gorkhas fought valiantly and successfully, preventing the enemy brigade from reinforcing Dhaka and coercing it sufficiently to surrender on December 16.

His conspicuous bravery earned him the Maha Vir Chakra. The battle account reads:

“On December 5, 1971, Lieutenant Colonel Arun Bhimrao Harolikar, who was commanding 4th Battalion of the 5th Gorkha Rifles (4/5 GR) was given the task of capturing an enemy position in Eastern Theatre. When two assaulting companies were held up due to intense enemy fire, Lt Col Harolikar came forward and personally led the remaining two companies along the most difficult and unexpected approach from behind the enemy. On reaching the objective, on the battle cry ‘Jai Mahakali — Aayo Gorkhali’, he personally led the charge and took part in hand-to-hand fighting, resulting in the capture of the enemy position.

On December 8, after landing of his battalion by helicopters behind Sylhet, the resolute fight by his Gorkhas under his inspiring leadership broke the enemy’s will to resist, resulting in early surrender of the entire garrison of several thousand enemy personnel.”

Dil Bahadur, the living legend, belongs to the reputed Chhetris of Nepal. The Chhetri clan traces its ancestry to the oldest martial race that generally had the last word in military matters and governance of the Himalayan kingdom. It is also widely believed that khukri as a weapon was crafted by this reputed clan. During hand-to-hand combat, Gorkhas are known to have wielded their shining khukri in close quarter battle, with effect.

For the capture of fortress-like Atgram defences in East Pakistan, for his single-handed dare-devilry, wiping out almost a section strength (10 men) of the enemy, Rifleman Chhetri was awarded the Maha Vir Chakra. The battle account reads:

“Rifleman Dil Badadur Chhetri was part of 4/5 Gorkha Rifles battalion which was given the task of clearing the enemy position from Atgram. This was a well fortified position and was held in strength by the enemy. During the assault, the enemy brought down sustained and accurate fire from medium machine guns, inflicting heavy casualties on the Gorkhas. Rifleman Chhetri, realising the importance of silencing the machine gun, in complete disregard for his personal safety, drew his khukri and single-handedly charged at the bunker and killed eight enemy jawans who resisted his charge. He then caught the red hot barrel of the machine gun, pulled it out and lobbed a grenade inside the bunker killing the firing crew.

His determination and cool courage so inspired his comrades that they charged the objective with great dash and captured it without any further casualties.” 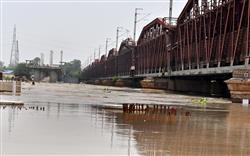