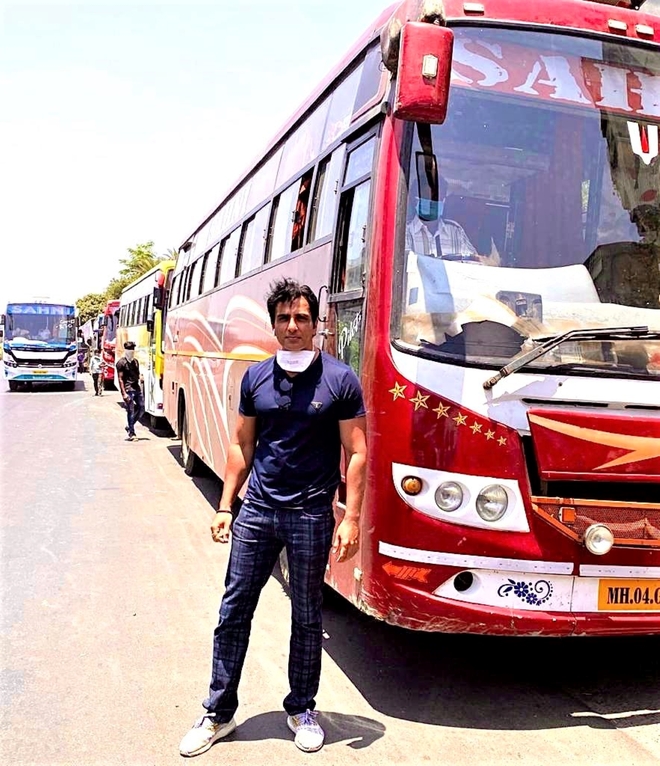 God sent: Sonu sees off a bus of migrant workers.

Politicians are busy heaping praise on him, film industry stands mighty proud and memes, for once, are laudatory and not scathing. The world struck by Covid-19 might be waking up to a new humanitarian Sonu Sood, but our Moga boy reveals that his philanthropic instinct is nothing new. ‘Help others’ has been his motto for long and a lesson he got from his parents early in life. Of course, today as the migrants consider him a messiah — one worships his photograph, another has named her son after him — he says he does not take the adulation too seriously, nor is he burdened by expectations.

Migrants walking thousands of miles, being killed on roads, homeless and hungry... the soul-stirring images haunted the actor from films like Dabangg and Simmba, as much as others. Already involved in serving food to the migrant labour along with his friend Neeti Goel from Punjab, he felt compelled to take tangible steps. Thus began mission Ghar Bhejo, and he started arranging transport (buses, trains, even flights) for migrant workers stuck in faraway parts of the country, as distant as Kerala.

The fact that the first batch of migrants was from Karnataka was sheer coincidence for the actor whose film journey began in South. He says he can’t thank enough those who have pitched in his efforts. “There was an incredibly supportive family and friends like Farah Khan, who call him on a daily basis to check with modalities and chip in whichever ways they can,” says Sonu.

Determined not to rest till every single migrant reaches home, the task at hand seems Herculean, something even governments could not crack. However, for Sonu charity begins at the doorstep of the insurmountable. Moreover, the actor does not just view himself as a migrant but all of us who move to different lands in pursuit of our dreams and for the sake of our loved ones. It’s this realisation that makes him empathise more than anyone else.

Interestingly, he can’t sense any dichotomy in many migrants wanting to return to their karmbhoomi either. He says, “There is nothing self-defeatist about that. Of course, they will have to come back. Only they feel reassured after they meet their families.”

As his phone is constantly buzzing with incessant requests, some amusing ones included he is tickled pink and has a hearty laugh about it all. However, what is more heartening is that he has managed to unite so many people. For every migrant reaching home, he reminds, “there is a multiplier effect — smiles from so many members of their families.” Indeed, when a star sets on mission impossible, things move easily. Permissions and other regulatory procedures are not so hard to get. Sure, there is greater media attention which could be a two-way sword. Sceptics might dismiss it as a publicity gimmick, but Sonu couldn’t care less.

With his heart in the right place, he knows his intentions are sincere. And with equal sincerity he has a piece of advice for his Punjabi brethren. “Just cook an extra meal and give it to a stranger — your watchman or your vegetable vendor. If each house were to do that, no one would go hungry.”

With fan following grows by the minute, we wonder if it would shake up the film industry too and translate into better parts (read more positive ones) in movies. He chuckles, “I hope so.” Anyway, we will be seeing him in Prithviraj and work on his home production, a biopic on ace shuttler PV Sindhu, too will begin soon. Raring to go onscreen and off-screen, he may or may not see himself as a hero, however, as Novalis said, “A hero is one who knows how to hang one minute longer.” Only Sonu is hanging out way beyond minutes, packing 22 hours in a working day. All for a cause close to his heart.

Was suffering from kidney ailment, admitted to Sector 21 pri...