General Arun Sridhar Vaidya was decorated with the same gallantry award twice — the first time in 1965 and the second in 1971 that earned him a Bar to the Maha Vir Chakra. He is one of only six soldiers to have got the distinction 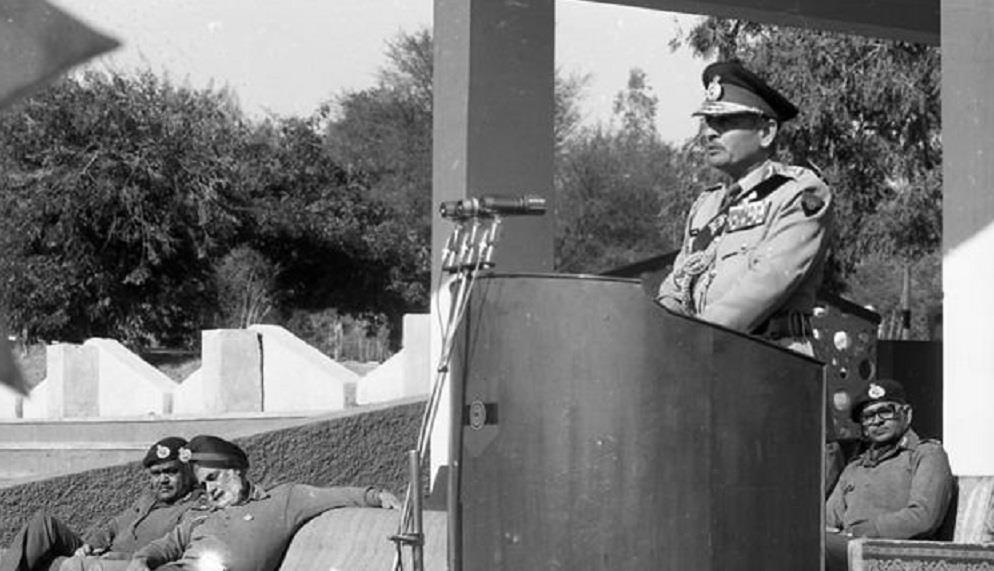 Gen Vaidya was in the thick of the bloodiest battles of the 1971 war in the western sector. Tribune Archives: Photo by Yog Joy

On a cold winter night when his men in the tanks were still waiting to weave a way through fields that could explode under their tracks, the Brigadier hustled from one machine to another. Stopping at the head of a column where a trawl tank was in the lead, he spoke a few words with another officer, a Sapper, on what the least risky path would be.

There was no guarantee that the least risky meant it would also be safe. This would be the third minefield in a row. The semi-official history of the war would later record it as 1,460 yards wide.

In the retelling of the saga of a soldier who fought two wars, who was handpicked to become the Chief of Army Staff to command an internal security operation that is still debated and whose life throws up more discussion in its death, what comes into the sharpest relief is a minefield.

Tiptoeing through his life and career demands a delicateness that defies rolling over dangerous paths. Yet, General Arun Sridhar Vaidya rose to the very top, after being decorated with the same gallantry award twice — the first time in 1965 and the second in 1971 that earned him a Bar to the Maha Vir Chakra. He is one of only six soldiers to have got the distinction. He was assassinated in Pune in 1986 after he had retired.

Selected for the Armoured Corps from the Officers’ Training School in Belgaum, he received an emergency commission in the Royal Deccan Horse (9th Deccan Horse) on January 20, 1947 and regular commission on May 7 that year.

As the officer commanding the 16th (Independent) Armoured Brigade in 1971, he was deployed with the 54 Infantry Division. In the words of the Pakistani military analyst, Maj Agha Humayun Amin (retd), “The toughest battles of the 1971 war were fought opposite the (Indian) 54 Infantry Division.”

The Division was tasked in the 1 Corps area of responsibility immediately north of the Shakargarh bulge, the protrusion of Pakistani territory that at its easternmost tip threatened the national highway between Pathankot and Jammu linking to Kashmir. Vaidya’s brigade launched from the general area of Mawa-Galar on the banks of the Degh river and heading south went on to establish a bridgehead and expand it across the Basantar in the face of fierce counter-attacks.

The many battles and skirmishes in the Shakargarh sector are overwhelmed by tales of gallantry — the one that stands out the most is that of Second Lieutenant Arun Khetarpal (who was posthumously awarded the Param Vir Chakra), The Poona Horse officer in Vaidya’s brigade in the Battle of Basantar. But before that dramatic tank-versus-tank shootout, Brigadier Vaidya was already briefed by his divisional commander, Maj Gen (later Lt Gen) Walter Antony Gustavo (“Wag”) Pinto, that his regiments would be in two thrusts towards the Pakistani defences on the Zafarwal-Dhamtal line.

To some extent, the penetrations by the 54 Division were prompted by a tardy response from the 36 Division in the south of the Shakargarh bulge. The 54 Division’s route was planned to be between the Basantar and Karir rivers. The advance began on the night of December 5 and 6.

Pakistan had laid at least three lines of minefields. The anti-tank mines were densely laid, with one estimate that there was a mine every 3 to 5 feet. The minefields had to be cleared for Indian tanks and troops to reach their objectives, among which were Barapindi-Jarpal. Vaidya was told that he, along with the 9th Engineers, whose Commanding Officer was Lt Col BT Pandit, would have to take the responsibility for trawling and clearing.

“The battles of Karir N (nullah) crossing at Chakra and the crossing of Basantar N at Sarajchak will go down in history as epoch-making deliberate mine-breach operations against well-fortified enemy positions by well-knit teams of all arms: infantry, engineers, armour and artillery,” Pinto would write later in his special order of the day. One officer wrote in a light-hearted reminiscence that it was akin to “breaking through a metal cage buried miles deep in the earth”.

In modern military terms though, it was slow and painstaking despite the Division’s later posters put up inside Pakistan that read “Bash on, regardless”.

To the east of the Zafarwal-Dhamtal line, at Dehira and Chakra, the advancing forces were met with heavy opposition, not only from the mines but also from fortified infantry positions with concrete bunkers. In a later introspection, Pakistani officers said it was a blunder on the part of Pakistan’s 1 Corps that was defending to not take advantage of the fact that the Indian thrust was ‘fixed’ between the first and second layer of minefields.

General Vaidya, who was battle-hardened from the Burma campaign in World War II and through the 1965 war that was more of a stalemate, personally swung between the two arms of the 54 Division, encouraging his men and he himself trawling through. He was seen peering through binoculars, surveying the field from Centurion tanks, often accompanied by men of 9 Engineers, also called the ‘Thambis’ because they comprised mostly Tamil-speaking troops. In one axis, the columns had to go through six minefields, one of them in the riverbed of the Basantar that totalled 8,000 yards (about 7.3 km) in length. They had been fed some intelligence from East Pakistan troops who had defected. But much of it was outdated.

“In the battle of Chakra and Dehira, the going was difficult due to deep minefield and terrain. In a cool and confident manner, Brigadier Vaidya undertook the crossing through the minefield. He personally moved forward, disregarding personal safety,” reads the citation for his Bar to the MVC.

“Through his inspired leadership, the entire squadron pushed through the lane and quickly deployed itself to meet the enemy’s counter-attacks. During the Battle of Basantar, he again displayed his professional skill and superb leadership. He got his tanks through one of the deepest minefields, expanded the bridgehead and repulsed a strong enemy counter-attack. In this battle, 62 enemy tanks were destroyed.”

In the fields around, the trees were charred from the shelling and the stink from the carcasses of animals in the deserted little villages of mudhouses hung heavy. But the Indian forces of the 54 Division had advanced 8-13 km inside Pakistan.

When the ceasefire was accepted in the western front on December 17 — Dhaka having already fallen, and the Pakistan forces under Niazi had surrendered the previous day — they were in sight of Zafarwal but had not reached their initial objectives. That was estimated to take four-five days from the day the operations were launched: dusk on December 5. The Division was to breach the Zafarwal-Dhamtal line and then go for Deoli and Mirzapur.

Even though the western front for India in 1971 was mostly a ‘holding operation’, Vaidya was in the thick of the bloodiest battles that continue to hold lessons for integrated operations to this day. They also threw up heroes on both sides.

“There were also other acts of bravery and determination,” noted The Tribune’s unnamed reporter in a dispatch “from the Basantar banks” days later. “A little away from Zafarwal, a Major from Haryana insisted on staying on his job till his Brigadier affectionately ordered his immediate removal for treatment.”