‘The king of ghazals’, whose 80th birth anniversary falls tomorrow, lives on in the hearts of millions of fans across the globe 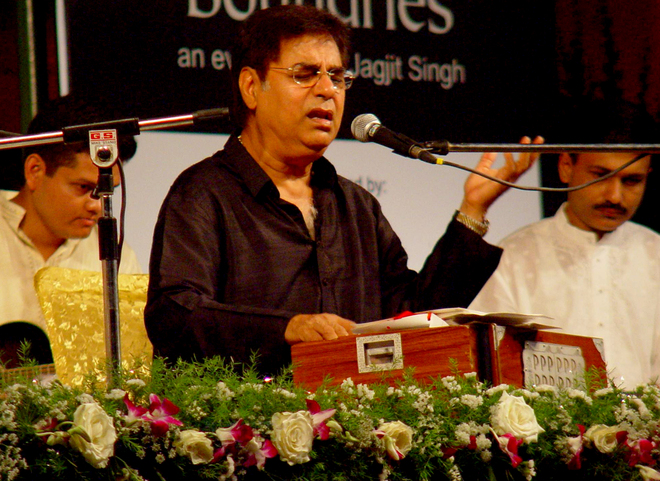 The musical virtuosity of the maestro can be measured by the spectrum of his work. While connoisseurs of Hindustani classical music cherish his compositions, lovers of ghazals consider his interpretation of Mirza Ghalib definitive

THE intuitive seers of music opine that Hindustani classical and light classical music, in the truest sense, is the serene, sacred and sweet language of the immortal soul and, as such, any musical performance should invariably be in tune with celestial peace and tranquility. Very few performers are gifted and blessed to induce a scintillating reverie among their audiences. The maverick maestro Jagjit Singh merits this distinction.

Coming from a modest Dhiman family of Sriganganagar in Rajasthan, Jagjit trained in classical vocal music for 12 years under Ustad Jamal Khan Saheb of Senia Gharana there, and later by Guru Sohan Singhji of Agra Gharana at Jalandhar during his college days. The celebrated ustads put him through rigorous and strenuous riyaaz of classical ragas and compositions.

As a prodigious youngster, he performed with his elder brother Jaswant Singh at a largely attended religious function in Sriganganagar and won prize money. At the age of 15, Jagjit shared the stage with Surinder Kaur and Asa Singh Mastana in his hometown where he presented a self-composed song, “Ki Tera Aitbaar”. He won the applause and admiration of all present there.

Jagjit Singh also brought laurels to DAV College, Jalandhar, winning medals in youth festival competitions in all formats: classical, sugam sangeet and Punjabi folk. He also composed and performed a welcome song for Dr Rajendra Prasad when the then President of India visited his college.

When the college principal, Suraj Bhan, joined as Vice Chancellor of Kurukshetra University, he took along Jagjit Singh with him, who took admission in MA (History). There, too, he excelled in music competitions.

It was during his college days that he attained the grading of AIR, Jalandhar. He frequently composed and sang for radio broadcasts. His prized composition of Sudershan Fakir’s song, “Hum Sab Bhartiya Hai”, remains the official song of the National Cadet Corps.

“Jagjit Singh was a better composer than classical singer, though he opted to sing ghazals later. He used to sing classical and light music for AIR, Jalandhar, as a graded artist,” says his senior at Agra Gharana, Pandit Yashpaul. The many songs he composed and performed at college became popular not only with his college mates, but also music lovers around the world. One such composition, “Dhuan Utha Tha Deewane Ke Jalte Ghar Se Saari Raat”, endeared Chitra Singh to his music, and eventually to the musician himself.

It was in 1961 that Jagjit Singh, who had gone for a performance at Ooty, caught the attention of actor Om Prakash, who was shooting for a film. Mesmerised, he invited Jagjit to Bombay. The actor introduced him to certain music directors. However, nothing eventful emerged. He simply watched and observed the singers there.

In his second attempt in Bombay in 1965, he was able to not only establish his supremacy as a composer and singer, but also as a music director of feature films and TV serials in Punjabi as well as other regional films. The rest, as they say, is history.

The musical virtuosity of the legend can be measured by the spectrum of his work and his contribution to music. If connoisseurs of Hindustani classical music cherish his compositions in Raag Darbari, Lalit, Bihag, Bhairavi and more on the one hand, the lovers of ghazal consider his interpretation of Mirza Ghalib as definitive. Those who are immersed in devotion rely on his recital of the Gayatri Mantra, Gurus’ bani and shabads to find inner peace. Similarly, his compositions of Shiv Kumar Batalvi carry the iconic Punjabi poet’s pain to millions of poetry lovers around the world. When Dr Manmohan Singh, the then Prime Minister, launched a set of postal stamps to commemorate Jagjit Singh’s 73rd birth anniversary on February 8, 2014, he pointed out that the understanding and depth of his musical knowledge was unparalleled.

The Urdu couplet by poet Khalid Rashid sums up the emotions of countless Jagjit Singh fans the world over, even as it brings forth the emptiness that his life and music partner Chitra Singh feels since his death in 2011. The music partnership between Jagjit Singh and Chitra Singh epitomised the elegance, erudition and esteem of all genres of music, particularly the modern ghazal. Unlike the earlier “mehboob se guftu” trend, their style of ghazal singing dealt with the whole spectrum of human emotions.

Belonging to a musical family of Calcutta, Chitra had grown up listening to the drone of tanpura and soulful musical strains emanating from the melodious voice of her mother, who was a classical vocalist. Chitra imbibed the basics of music before she got married to her first husband Debo Parsad Dutta, also a music enthusiast. Though Dutta worked in an advertising agency, he had established a music studio in his house, which was frequently visited by composers and singers for recording. It is here that she first met Jagjit Singh. In an interview, Chitra Singh, now 75, shares some memories of life with and after the demise of her mentor, guru and loving partner. Excerpts:

It is said you outrightly rejected Jagjit Singh’s voice when you first heard him.

My Gujarati neighbour had invited me to a concert at her house where a young boy from Punjab was to sing for us. The place was over-crowded so I couldn’t attend it. The next day she brought the recording for me. When I heard it, I said while sur and taal were good, the voice was too heavy — ‘kharab lagta hai’. I then heard Jagjit singing when he visited my house for a recording, directed by music director Mohinderjit Singh. When I opened the door for him, I observed that he was virtually sleeping along the wall. As soon as he entered our home studio, he crashed out in a corner. After other singers had recorded, Jagjit took over the harmonium. He displayed amazing control over the instrument and gayaki, but again I didn’t much like his heavy bass voice. I even refused to record the planned duet with him. My husband Debo Dutta, however, liked his voice.

What changed your opinion?

Once on our way back after recording a jingle in another studio, I invited him over for a cup of tea. While I was preparing tea in the kitchen, he pulled out my harmonium and started singing a ghazal: “Dhuan Utha Deewane Ke Jalte Ghar Se Saari Raat”. What a melodious composition, weaving the lyrical intent to perfection. It was mesmerising. I was surprised to know that he had composed this complex composition during his college days. His music composing skills were a revelation to me. Thereafter, we met frequently for music practice.

How did your marriage with Jagjit Singh materialise?

After the divorce, I was living separately with my daughter Monika. My association with Jagjit developed into close friendship. We established ourselves as duet ghazal singers of merit when a concert tour took us to Africa. The tour established us as international performers. Jagjit was very supportive as far as music and my life were concerned. He was fond of Monika. Upon our return, we decided to get married. Jagjit even sought my ex-husband’s consent for this. A simple marriage ceremony was held at a gurdwara in Colaba. Both of us worked hard to sustain ourselves. We recorded and performed tirelessly. He groomed me into a versatile singer. It was his love which kept me going even when we lost our son Vivek in 1990 and daughter in 2009. Though he’s no more, his memory lives on. — SDS