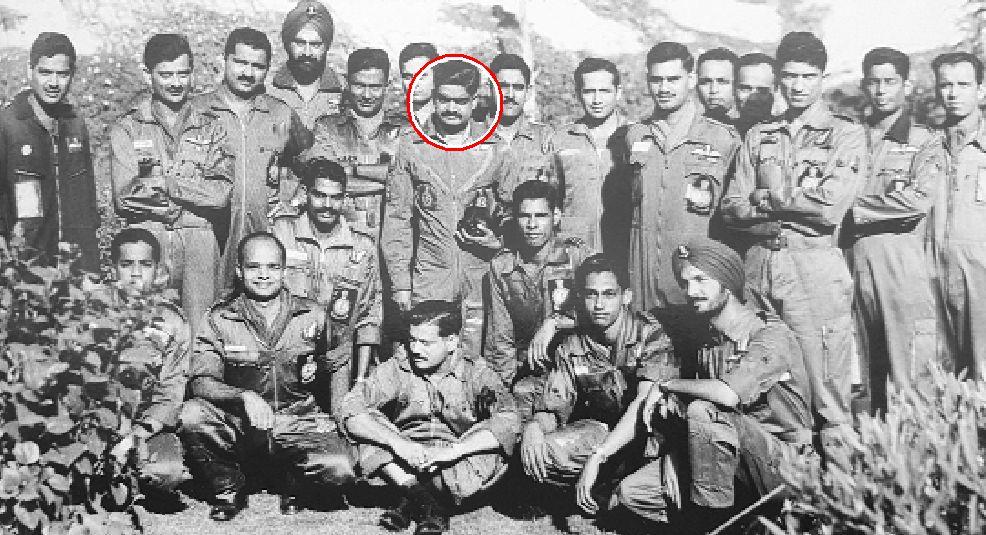 Wing Commander Padmanabha Gautam (encircled), the Commanding Officer of 16 Squadron during the 1971 war, made it a point to engage with all his aircrew on issues such as courage, bravery and fear. Everyone in the Black Cobras knew who would be the one to fly the riskiest missions and that leadership under fire would never be an issue. Photos courtesy: The writer

The Canberra fleet of the Indian Air Force is a proud one. Its contribution in the bombing role in Congo, the two India-Pakistan wars of 1965 and 1971, and in the recce roles in 1962 and Kargil is outstanding by any yardstick. We celebrate the accomplishments of one of the two IAF Canberra pilots who are recipients of the Maha Vir Chakra twice over, Wing Commander Padmanabha Gautam, the Commanding Officer of 16 Squadron during the 1971 conflict. (Wing Commander JM Nath is the other).

Gautam took over command of 16 Squadron, also known as the Black Cobras, in November 1969. He had just returned from Iraq after a welcome instructional assignment that had followed a hectic six years of flying and achievement. He was also part of the IAF Canberra contingent in Congo in the early 1960s. As the CO of the Joint Bomber Conversion Unit (JBCU), a Canberra squadron in 1965, he was awarded his first Maha Vir Chakra for the several risky missions that he flew as a pathfinder to hit targets at the extremities of the Canberra’s radius of action such as Peshawar. Not satisfied with that, he executed a near dead-stick landing in Iraq on a MiG-17, for which he was commended by both the Iraqi government and the IAF. Air Marshal Vir Narain, one of the pioneer navigators from the Canberra fleet and several years senior to Gautam, remembers him as a confident, cocky and very competent young pilot.

Two navigators from the squadron, Wing Commanders Ranganathan and Group Captain Dutta, had a ringside view of Gautam’s tenure as Commanding Officer from two different perspectives. While the former, now in his late eighties, was a Squadron Leader and a few years junior to Gautam and was his navigation leader in the squadron, the latter was a Flying Officer with three years of service and still talks about his former CO with awe. Training and bonding for over two years under Gautam made the Black Cobras a formidable unit as war clouds loomed on the horizon in mid-1971. Gautam was an addicted flyer, according to both Dutta and Ranganathan, and wanted to be in a cockpit whenever the opportunity presented itself. Based in Gorakhpur, Dutta recollects that though 16 Squadron was primarily assigned with roles in the eastern theatre of operations, Gautam’s experience in the western sector in 1965 prompted Air HQ to assign the squadron with several missions in the west too.

Reflecting the systematic approach to training and preparing for war that had permeated through several squadrons of the IAF in the build-up to December 1971, Gautam created pilot-navigator teams that commenced training as early as March 1971. Choosing abandoned WW-II airfields in Uttar Pradesh, Bihar and West Bengal as simulated targets, the squadron perfected the art of low-level ingress at night into hostile territory at 500 feet, popping up to 7,000 feet for weapon delivery, which comprised 8X1000 lb bombs, and then diving down to 300-500 feet for the perilous return leg home. Being the senior-most among the commanding officers of the three Canberra squadrons, Gautam was often called to Allahabad, the HQ of Central Air Command, where all mission planning was done.

Remembering his former CO as a fun-loving family man with a great sense of humour and a love for music who wore his accomplishments lightly on his shoulders and drove around in his Mercedes Benz, Ranganathan recollects that from early November 1971 onwards, Gautam made it a point to engage with all his aircrew on issues such as courage, bravery and fear. Everyone in the Black Cobras knew who would be the one to fly the riskiest missions and that leadership under fire would never be an issue.

Dutta recollects that Gautam and he were an inseparable pilot-navigator pair as they initially undertook night bombing missions in the western sector over Mianwali airfield and the Raiwind railway marshalling yard near Lahore. Three-four aircraft would get airborne from Gorakhpur, land at Ambala to refuel and arm before striking targets and returning to Gorakhpur in the wee hours of the morning. All the missions faced a hostile reception over the target area as the sky would be invariably lit up with ack-ack fire, and it was a combination of skill and luck that the squadron suffered no losses in the western sector. Shifting focus to the east once the IAF had achieved air superiority, 16 Squadron commenced its attacks on targets in Chittagong, Khulna and the military cantonment on the outskirts of Dacca. The squadron got hit on the last day of the war when they lost the effervescent Flight Lieutenant Brian Wilson and his navigator Flight Lieutenant Mehta over Dacca in a day raid over Kurmitola.

Gautam and Dutta flew together on six long-distance and long-duration missions as the squadron clocked almost 70 operational missions during the war. Dutta particularly remembers a night mission to Mianwali where they dropped jelly-filled spike bombs that were innovative runway denial weapons. It was later confirmed by one of the Bengali pilots of the PAF based at Mianwali, who escaped to India via Afghanistan, that a PAF F-86 Sabre was destroyed while trying to scramble without realising that there was jelly and spikes on the runway. Dutta was awarded a Vir Chakra for being an ideal foil to Gautam, who himself was awarded a Bar to the Maha Vir Chakra for his inspirational leadership of the squadron and personal exploits of sustained courage and flying skill in war.

Moving to Pune as the Chief Operations Officer (OC Flying in those days) on promotion to Group Captain, Gautam flew both the MiG-21 and the Canberra there. Unfortunately, he perished in a MiG-21 crash on November 25, 1972, after his aircraft flamed out after take-off. A school located close to the Air Force station still commemorates that day with a silent prayer in remembrance of Gautam, as he is believed to have steered the stricken MiG-21 away from the school where it was directly headed for impact. In the process, he lost critical seconds that would have facilitated an ejection. Gautam’s courage and selflessness had followed him from the war zone and he will remain an inspiration for future generations of the IAF.