Millets are grown mostly on drylands, where other crops cannot be grown. They can survive even under extreme drought conditions. However, the average yield of millets is 1,111 kg per hectare, far less than 2,600 kg for paddy and 3,500 kg for wheat. There is a need for the development and wider adoption of high-yielding varieties. Research shows that even one irrigation at the critical growth stage doubles the yield of millets. Hence, incentives have to be provided to give critical irrigation. 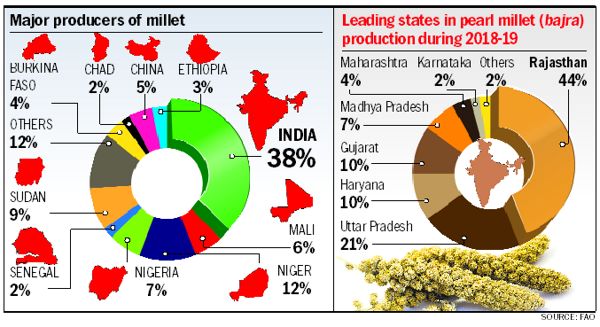 THE United Nations recently declared 2023 as the International Year of Millets, considering the crops’ nutritional qualities, resilience to climate change and their potential to alleviate poverty among farmers in drought-prone areas. Millets are widely called nutri-cereals as they are richer in fibre, proteins, iron, copper, zinc, vitamins and other nutrients than other cereals like rice and wheat. There are about 300 millet species grown in the world, but about 12 are commonly used for human diet. Jowar and bajra are the major millets, whereas ragi, foxtail millet, barnyard millet, proso millet, kodo millet and little millet are the minor ones.

Asia and Africa together account for 97% of the global millet production of 29-30 million tonnes. India is a dominant player with around 40% of the global production. Historically, Asian and African population used to depend on millets like jowar, ragi and bajra for their staple food. However, with the advent of the Green Revolution and popularisation of high-yielding varieties of rice and wheat, these crops were relegated to a secondary status in both cultivation and use for human consumption. In the 1960s, the average annual per capita consumption of millets was 32.9 kg, roughly eight times what an urban Indian consumed (4.2 kg) in 2020.

But non-food use of millets increased significantly, especially as animal feed ingredients and as raw material in breweries and starch industries. According to estimates, about 60% of the millet production is for non-human consumption. Millets are also grown for use as fodder for cattle.

The number of people experiencing obesity, diabetes and heart ailments is increasing due to a sedentary lifestyle. Studies have indicated that the consumption of millets reduces the risk of most of these lifestyle-related diseases. Millets have less glycemic index (GI) than rice and wheat. Innovative preparations of sorghum, such as upma, flakes, pasta and biscuits, have 5% to 35% lower GI index than wheat. That means it raises the blood sugar level slowly instead of in quick spikes. High-fibre, low-GI foods keep blood sugar steady, lower cholesterol, and help in losing weight. There is a need for a shift from the existing rice-wheat-dominated diet to diversified diets with millets to improve the overall health of the populace.

Millets are grown mostly on drylands, where other crops cannot be grown. They can survive even under extreme drought conditions. They can grow in arid zones, requiring only 350-400 mm of annual rainfall. Some varieties of pearl millet survive at temperatures up to 46°C. They are generally intercropped with other crops. However, the average yield of millets is 1,111 kg/hectare, far less than 2,600 kg/hectare for paddy and 3,500 kg for wheat. Hence, there is a need for the development and wider adoption of high-yielding varieties. Research shows that even one irrigation at the critical growth stage doubles the yield of millets. Hence, incentives have to be provided to give critical irrigation.

There is also a need to increase the area under millets by creating awareness among consumers, farmers and policy-makers.

Among the states, Odisha has been proactive in promoting millet-based food systems under the Odisha Millets Mission. The mission targets tribal farmers in drylands for production to meet the consumption needs of children and women among whom undernourishment is a major problem.

The mission is aimed at improving nutrition through the revival of millets in farms and on plates. By making investments in increasing productivity, processing technologies and a price guarantee for millet crops, millets are being mainstreamed. The mission is committed to make millet grains and products available at affordable prices to the common man. The government, with the help of women’s self-help groups, procures millets from farmers at the Minimum Support Price (MSP) and distributes among Below Poverty Line (BPL) households under the Public Distribution System (PDS), to children and women through anganwadis under the Integrated Child Development Scheme, and to schoolchildren under the Mid-Day Meal scheme. They have also developed value-added products to prepare breakfast recipes with the technical help of ICAR-Indian Institute of Millets Research to meet urban consumption needs.

Under this mission, the production of millets in tribal villages is linked to consumption under various government schemes. It is a good example of cooperation and convergence of all departments relating to food security under one umbrella in the mission mode, which links agricultural production support services of the agricultural department with consumption-end departments like Women and Child Development and Food Supplies and Consumer Welfare with focus on household nutrition.

In Odisha, over 26,495 farmers registered for procurement of millets and almost 95% of the production was procured from farmers in 2019-20 under the mission. One kg of millets per month was distributed at the rate of Re 1 per kg under the PDS among 16 lakh BPL households. A recent NITI Aayog study indicated that on an average, the farmers’ gross income from millets rose by 215% with the implementation of the mission between 2016-17 and 2017-18. There was 120% increase in productivity during the same period.

Karnataka has also been promoting millets since long. Under the Raitha Siri scheme, the state government is giving Rs 10,000 per hectare to millet farmers. Farmers will grow millets if there are remunerative prices every year. In Karnataka, the government is encouraging the serving of millets in anganwadis and under the Mid-Day Meal scheme.

However, in order to mainstream millets into the food systems, scientists have to overcome some problems. Making a millet roti is time-consuming; there is a need for developing scientific cooking practices to shorten the time, which will increase daily use of millet by replacing wheat roti. Another constraint in introducing millets in the food systems is the low shelf life of the grain, which needs to be increased through better storage structures. Millet crops like sorghum and pearl millet needs to be promoted as fodder by developing fodder markets, especially in the summer season.

The experience of Odisha and Karnataka needs to be replicated in other states. Both states have been successful in increasing farmers’ income and ensuring nutritional and diversified food for poor households.