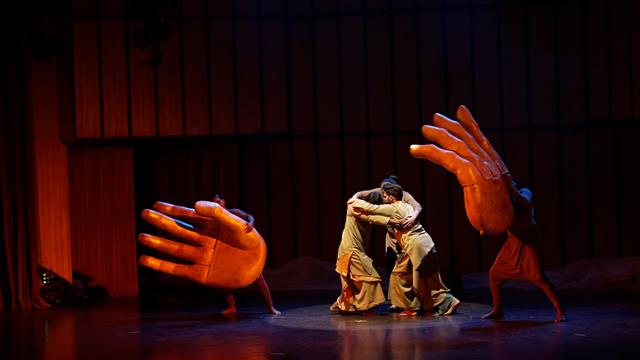 ‘Rumiyana’ is based on the works of the great Sufi mystic, poet and philosopher Rumi.

TRAVELLING all the way to the Serendipity Arts Festival in Goa with ‘Rumiyana’, Dadi Pudumjee says he is a little stressed and a bit nervous. This perhaps stems from the fact that puppetry is largely associated with kids and Pudumjee’s subject here is Sufism.

Modern Indian puppetry’s grand old man, Pudumjee has been taking the craft to various cities and towns for the last five decades. His Ishara International Puppet Theatre Festival has been introducing puppetry to young Indians for close to two decades now.

‘Rumiyana’ plays out on a bigger scale, merging the visual arts with animation. It synergises puppets, actors and dancers to create a multimedia performance with music by Bengaluru-based Sandeep Pillai and animations and digital projections by Shaaz Ahmed, taking puppetry in India to a whole new level. “Our last show too used animation, minimalistic though, as the background to showcase locations,” says Pudumjee.

This play is based on the works of the great Sufi mystic, poet and philosopher Rumi. The hour-long show tells four tales from ‘Masnavi’, Rumi’s most famous work. Pudumjee says ‘Rumiyana’ celebrates love, unity, harmony and diversity. “It is while researching for this production that I found out that Rumi is the second most-read poet in the world. I didn’t know he was so universal,” says Pudumjee.

It is this theme of the play that his nervousness stems from. The trial show at the India Habitat Centre in Delhi earlier this month was a hit; his audience there mainly comprised young adults. He knows that his audience in Goa, more likely to be kids, would appreciate the puppets, but is not sure how much of the central idea would they absorb. However, he wants them to come, see and go home with questions for their parents.

Pudumjee says puppetry at Ishara is a play of masks, actors and movements. “We always use puppets as a means to tell a story and not as an ends to tell a story. We have changed the outlook of puppetry. Thus, it is not just for children.”

‘Rumiyana’ — with its message about diversity and plurality — falls somewhere in between all this. “One of the centrepieces of ‘Rumiyana’ is chants. Beginning with Ek Omkar, it goes into azaan and from there into a Buddhist chant, the Lord’s Prayer and ends with Om Shanti. That is where it links the whole idea of the universality of Rumi and his poetry. Rumi isn’t just in Afghanistan or Iran, but all over. And this idea is very valid today, something everybody needs,” says Pudumjee.