For three decades, the Brazilian photographer has observed, recorded and lived the lives of people he shot 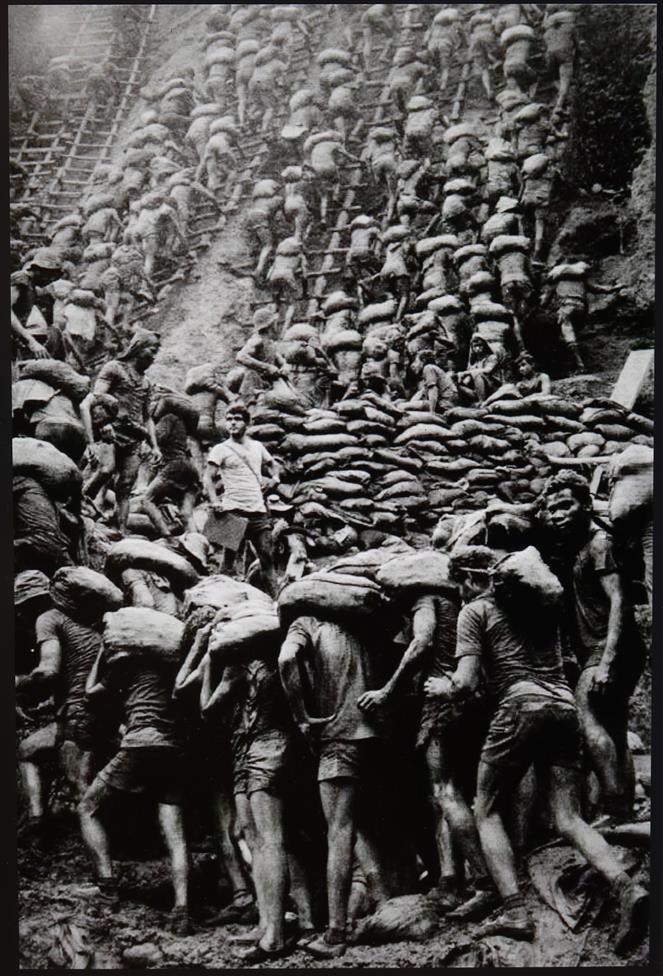 Miners jostling and clambering up ladders. The Gold Rush at Serra Pellada

I try with my pictures to raise a question, provoke a debate, so that we can discuss our problems together, and come up with solutions. — Sebastiao Salgado

In Genesis, my camera allowed nature to speak to me. And it was my privilege to listen… We are living in a moment where we have broken the equilibrium of the planet. We are not paying attention to our intuitive side. We only pay attention to our reason. We have become an urban animal… — Sebastiao Salgado

You don’t take a photograph. You make it.

The year was 1979. That is when gold was discovered in a mountainous piece of land in the Brazilian village of Serra Pellada by a villager. Word spread very quickly and soon hundreds of people, thousands in fact, calling themselves miners, began to rush to the site, some finding gold, others not. Some 50,000 miners, it is estimated, began working on gold at 60 cents per day: digging pits, taking sometimes as many as 60 trips up and down the dangerous cliff on endlessly long, rickety bamboo ladders, carrying sacks weighing between 30 and 60 kilograms. As an alternative to cash payments, sometimes each man would be given the right to pick one sack to keep: ‘probably full of just dirt, but possibly containing a king’s ransom in gold nuggets’. Disease, violence, palpable danger was everywhere. It is in this situation that Sebastiao Salgado, the great photographer that I write about here, landed on this indescribable scene. He could not believe either his eyes or his ears. The thought that came to my mind, he later said once, was how the pyramids must have been built, or the Tower of Babel. “I’d returned to the beginning of time,” he says. “I could hear the gold whispering in the souls of these men.” For several weeks, Salgado stayed there, taking 28 stunning photographs in black and white, from impossible angles which, as a part of the book titled ‘Gold’, have come to belong to the history of photography. When he ended, he had captured thousands of labourers staggering under the weight of sacks of soil carrying up huge ladders out of the pit: breathing hard; now despairing, now elated; fighting one another for places; forming gangs; standing up to stern supervisors. These were scenes from another, a very different world. Suddenly, a man who had trained as an economist, and had held a camera in his hands for the first time in 1970, shifted gear. He swore loyalty to photography. “I looked through a lens,” he wrote,“and ended up abandoning everything else.”

There is “a mixture of anguish and exultation” not only in this haunting “era-defining” work, as Bob Mondello wrote, but perhaps in all of Salgado’s. To describe him simply as a ‘photo-journalist’ or a ‘social photographer’ would, therefore, be less than just, for his heart beats differently. For upwards of three decades, he has not only observed and recorded but virtually lived the lives of the people whom we see in his work: firefighters battling to extinguish some 500 oil wells aflame in Kuwait after the Gulf War; famished men carrying dead children in their arms in Rwanda, trying to find a place where to bury them; widowed women walking barefoot across bleak miles of desert, little boys walking by their sides, in search of food perhaps, or a dwelling; starving cattle tended by starving boys. Drought in Nigeria, famine in Ethiopia, war and genocide in Bosnia, entire forests getting denuded, the displacement of whole populations, migrant workers trying to eke out a living. Salgado was covering everything: not because these events were of topical interest, but because he had something urgent to say about them. He travelled as if it was his mission to travel: thousands of miles from one land, one region, to another. [“It is more important for a photographer to have very good shoes,” he said good-humouredly once, “than to have a very good camera.”] These were events ‘from which the world understandably tries to avert its gaze’, but he wanted ‘us to look — and look intently — by finding humanity in scenes of despair: an infant’s trust; a mother’s fortitude; a half-naked boy clutching a guitar, shoulders straight, staring out at an endless expanse of sand’.

As he worked, he kept publishing: most impressively mounted books, including ‘Other Americas’; ‘Sahel, Man in Distress’; ‘Sahel: The End of the Road’; ‘An Uncertain Grace’; ‘Gold’; ‘Workers: Archaeology of the Industrial Age’; ‘Terra’; ‘Migrations and Portraits’; ‘Africa’; ‘Kuwait: A Desert on Fire’. He does not look for assignments; he assigns things to himself. Almost as a counterpoint to his searing records of human misery, between 2004 and 2011, he worked on a series he named ‘Genesis’, taking his title from the first book of the Bible which speaks of Creation. It is Salgado’s ‘Love Letter to the Earth’, capturing this world as it might have looked when Time began, so to speak: landscape unchanged in aeons of time, people on first name terms with Nature. Pristine, untouched beauty. The images are haunting.

Nothing is finished yet. Loaded with honours from all over the world — universities, associations, institutions conferring Lifetime Achievement Awards, most recently a doctorate from Harvard — Salgado keeps working, planning, relentlessly. I recently had the pleasure of speaking to him over the phone for a minute or two — courtesy my friend Abhishek Poddar, who is steeped in his plans for a new, visionary museum in Bengaluru, and knows Salgado personally — and asked him when he would be in India next. ‘Soon,’ Salgado said. ‘I would love to come.’ I hope he does, for there is much here to see too, the beauty of our landscape and architecture apart — rickety ladders of unfulfilled dreams that people keep climbing on in despair; homeless men sleeping on railway platforms, their heads resting on frayed shoes; mothers trudging long distances, children in tow, to fetch water for their homes from distant, thinning streams.