In an observant and illuminating documentary, Samarth Mahajan, who has his roots in Gurdaspur, examines six ordinary lives shaped by India’s many borders 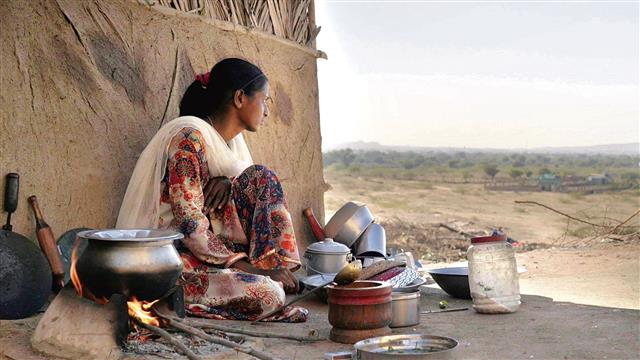 Deepa lives in a Pakistani migrant settlement in Jodhpur.

Samarth Mahajan’s Borderlands, the filmmaker’s second feature-length documentary, trains the spotlight on those who live on or near India’s frontiers. While the film is expressly about the lines that separate one country from another, it is just as much about ruptures that geographical demarcations cause within society and in the depths of the human heart. Mahajan, whose own roots are in Dinanagar, Punjab’s northernmost town, places personal narratives front and centre in a cinematic essay that delivers vivid portraits of six individuals whose existence is inextricably linked with the nation’s borders.

Conflict, infiltration and nationalism are themes that usually dominate films about geographical boundaries. But these aren’t central to Mahajan’s sharply observant, illuminating cinematic essay. It reveals how lines drawn on land impinge upon personal identity and the imagination of individuals.

Mahajan, a mechanical engineering graduate from IIT Kharagpur, made the National Award-winning documentary The Unreserved in 2017. It examined the lives and struggles of train passengers who travel in general compartments.

The same empathy is on full view in Borderlands, crowdfunded by more than 550 contributors from 10 nations. The film had its World Premiere at DOK.festMunchen in May, where it played in the Horizonte competition, before airing online as part of the New York Indian Film Festival (NYIFF, June 4-13).

Among the people Borderlands homes in is the filmmaker’s mother. These passages add up to an intimate portrait of a homemaker inseparable from the routine that her 24x7 role as wife and mother has imposed upon her.

The only man portrayed in Borderlands is Imphal-based filmmaker Surjakanta. Living not far away from the India-Myanmar border, he throws light on Manipur’s turbulent contemporary history. He explains why it is essential for him to use cinema to tell “our stories”.

Mahajan tells one story of his own and it features his mother, Rekha Mahajan. She was born not very far from the India-Pakistan border. She was married into a family that also lived near the line that separates the two nations. But she had never seen the Wagah border, a few kilometres away, until her filmmaker son decided to film her and delve into her life.

Mahajan peels off many layers — personal, familial, social and transactional — as Rekha reveals her innermost feelings on camera, in the bargain mirroring the lot of countless Indian women who abandon their ambitions and desires at the border where domestic responsibilities kick in.

He does an equally effective job of delineating the other characters. One such is Dhauli. She lives in Nargaon on the India-Bangladesh border. Many years ago, she left her ancestral home and accompanied her husband to India. The notion of home continues to be hazy in Dhauli’s mind. She pines for her parents and siblings. The anguish of separation lingers. Rekha’s pain is no less palpable. She laments the monotony of her life, a sense of loneliness, and a feeling of emotional weakness. Dhauli, on her part, complains that she felt caged in when a fence was erected between India and Bangladesh. She says she hasn’t managed to reconcile herself to missing the birth of her younger sister in Bangladesh. She would have loved to be the first to hold the girl in her arms. But borders do not respect emotions.

Life has been infinitely more painful for Noor, a trafficked Bangladeshi girl, who lives in a Kolkata shelter home. The film closes up on faces when the characters speak, recording every glint, every grimace and flash of emotion. However, given the nature of her story, Noor’s face stays off camera. Still in her teens, Noor has seen more than her share of emotional upheavals — betrayal, violence, love, separation — but she clings on to the hope that she can rebuild her life and reclaim all that she’s lost.

At the other end of the spectrum is Kavita, who works at a border check-post in Birgunj, Nepal. Her job is to prevent trafficking of girls. Kavita and Noor exist on two divergent sides of a criminal trade that exploits vulnerable women and porous borders.But one is as spirited as the other.

An occasional dash of humour enlivens the story of Deepa, who lives in a Pakistani migrant settlement in Jodhpur. It isn’t easy adjusting into a new environment. She aspires to be a nurse. In Pakistan, the medium of education was Urdu and Sindhi. In India, Kavita has to learn Hindi to complete her studies. The move across the border has altered Deepa’s life for good, but she is determined to soldier on, the costs notwithstanding.