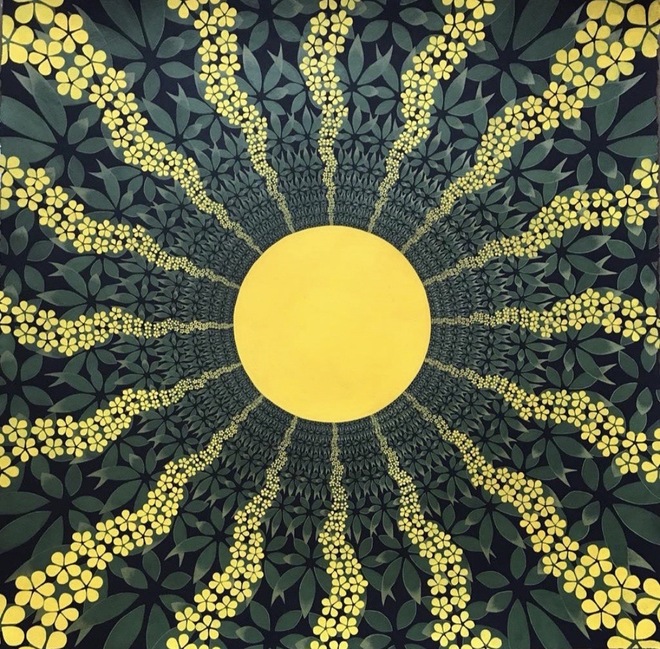 Fondness for the summer sun finds expression in Fraser’s works.

“Summertime. It was a song. It was a season. I wondered if that season would ever live inside of me.” — Benjamin AlireSáenz

Scottish artist Olivia Fraser’s latest show at London’s Grosvenor Gallery is entitled ‘Indian Summer’. According to the artist, it represents all that is positive, rejuvenating and prosperous after the harshness of a cold, impersonal winter. Settled in a sprawling farmhouse in Mehrauli, on the outskirts of New Delhi, with her author and historian husband William Dalrymple and her family, Olivia identifies herself with India, its art, culture, history and architecture ever since she moved here in 1989.

Having learnt art at the Wimbledon Art College, she chose to further study and understand the traditional Indian miniature painting technique under Jaipuri and Delhi masters. For her, “miniature painting isn’t about the ‘miniature’ size of the paintings but instead about the techniques, material, style and traditional narrative deployed by the artist”. It is about the detailing in the finer nuances, about a sense of observation and about expression in a manner that is true to the art form.

Olivia finds the entire process of grinding pigments from naturally occurring materials such as malachite and lapis lazuli, and mixing these with Gum Arabic and water very comforting owing to the leisurely and unhurried pace. According to her, “Painting particularly in ancient Indian styles such as Nathdwara Pichwai is a calm, peaceful and steady process that reminds us of how human beings are essentially connected to nature. I thrive in the slowness and stillness of it all and the movement created by the fine squirrel or mongoose hair brushes on handmade sheets of Sanganer paper completes the cyclical element of existence. For me, the process of seeing ‘inside out’ or of the intrinsic link between our spiritual and physical worlds is particularly enamouring.”

The ornately burnished surfaces with meticulous brush strokes are amply visible in her creations that are evocative in their gem-like stone colours and familiar Indian motifs. She, sometimes, even uses gold leaf and other semi-precious gems for adding a blend of authenticity to her miniatures. Over the years, she has moved from depicting people, places, topographies and cultures of India to more detailed and refined figurines and elements that have more “depth and enriched, deep colours”.

According to Olivia, perhaps being from the western part of the world makes her exceptionally fond of long Indian summers, which despite their quintessential ‘heat and dust’ analogies are full of beauty and hope. “Summer is the season of the delicious, ripe and juicy mangoes, akin to a reward for dwelling in the scorching sun for nearly five months and that, for me, is the joy of summer. Plus, the Amaltas in all its golden glory is blazing like the flaming sun from treetops and the sight is like a balm for sore eyes. It is no surprise then that mangoes have found their way in two prominent artworks of the show, Indian Summer I and II.”

Olivia started working on the artworks for this show during the 2020 lockdown and found much solace gazing at the laburnum blossoms visible from her studio window. Art for her has been offering much respite and comfort during these intermittent lockdowns. “I have also created an artwork where I have shown my feet, and these are metaphorical while we are ensconced within our homes during another pandemic-induced curfew situation. Since feet are all about walking and freedom to move, perhaps, this is my way of representing paths that we wish to tread once we have the freedom to go about the business of living. Also, feet are considered sacred in Buddhism, Hinduism, even Christianity, and are an import symbology of our belief systems and how we can always learn something new from invoking ancient wisdom.”