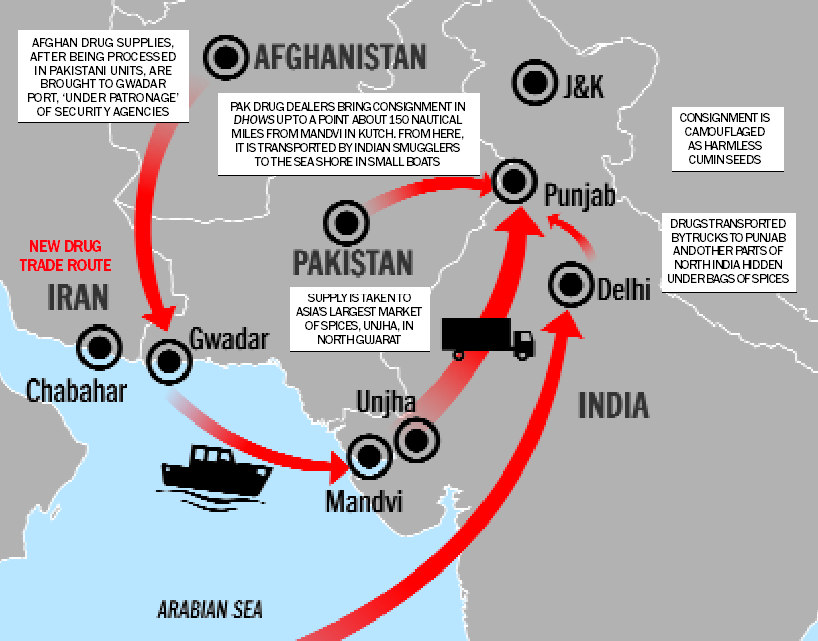 The Gujarat Police hope to reach the bottom of the Gujarat link in the Pakistan to Punjab drug trafficking with the arrest last week in Italy of Simranjit Singh Sandhu, considered to be one of the biggest drug mafiosi of the country, who the police of the two states believe was the main brain behind adopting novel methods in drug smuggling.

Task at hand is to outsmart future moves

The smugglers are trying to use every possible route —land, air, sea or even underground through riverine areas, pipes or tunnels — to flood the region with drugs. The challenge is to keep an eye and continuously try to outsmart their future moves. Punjab agencies come in the picture when the drugs have already passed through many check barriers, which is worrisome.

The Gujarat Anti-Terrorism Squad (ATS) had been on the trail of Sandhu, a resident of Amritsar, ever since it detected the drug racket using Gujarat as a corridor in August 2018. The contraband from Pakistan was taken to Punjab and possibly also some other states in North India. Sandhu, it was reported, fled to Nepal and from there to Australia and finally landed in Italy, where at the behest of the Gujarat ATS he was detained by Interpol last week.

Taking a cue from the Pakistan-based Mumbai attackers and to avoid the strict vigil on the Punjab land border, the drug traffickers thought it prudent to use the vast, and in many parts virgin, sea coast in Gujarat to smuggle in the contraband and use Asia’s largest market in spices, Unjha located in north Gujarat, to camouflage the drug packages as harmless cumin seeds to transport the drugs by trucks to Punjab.

Narco-terror modules have assumed serious proportions as KLF was using drug smugglers to smuggle in weapons and drugs. There is evidence that JeM terrorists who attacked Pathankot Air Force base in 2016 had sneaked in using smuggling routes. The fact that Kashmiri residents figured prominently in all the gangs of smugglers busted recently pointed to the reach of the network.

The Sandhu gang, the Gujarat Police sources said, was the first known drug traffickers to use the sea route, landing the contraband on the Mandvi coast in Kutch district and transporting the consignment by road hidden under bags of spices.

Since when these novel methods of drugs trafficking were being used would perhaps be known when the Gujarat ATS gets to question Sandhu, but the chance arrest of two very small operators, residents of Jam Salaya near the Jamnagar coast, had led the police to the multi-billion dollar international drugs gang.

The police, on suspicion, had held one Abdul Aziz Bhagad with 5 kg of heroin in mid-August of 2018, and on questioning him detected the drug racket. Bhagad told the police that the drugs being carried by him were a small part of a 100-kg consignment sent from Pakistan and received at the Mandvi port by Shahid Sumra.

On the basis of the information provided by him, one Rafiq Sumra, a transporter of Mandvi and a relative of Shahid Sumra, was arrested while carrying a part of the consignment in his truck hidden under the cumin seeds loaded from Unjha.

Interrogation revealed that what he was carrying was the second consignment and the first consignment of 200 kg of heroin had already reached Punjab.

Bhagad had told the police that the Pakistani drug dealers had brought the consignment in dhows up to a point about 150 nautical miles from Mandvi, from where it was picked up by him and brought to the sea shore in small boats and delivered to Shahid Sumra.

On the basis of information revealed by Bhagad and Sumra, the Gujarat Police in September 2018 had also nabbed Nazir Ahmed Thakar from Srinagar. Thakar, a native of Anantnag district, and his accomplice Manzur Ahmed Mir had allegedly taken a large consignment from Rafiq Sumra at Unjha. Thakar is claimed to have revealed to the Gujarat Police that he and Mir took instructions from Sandhu.

The Gujarat ATS claimed to have identified the other truck drivers who had delivered the earlier drug consignments to Punjab and other northern states, all believed to be following the same modus operandi of hiding the contraband under the Unjha spices.

The state police have claimed that the sea route to Mandvi had been closed for drug trafficking ever since the detection of the Sandhu gang, but the recent seizure of two bags containing heroin pouches lying unclaimed on the Mandvi shore had again raised questions on the veracity of the police claims. The state police, however, have sought to dispense the recovery as part of the earlier smuggled consignment which was thrown into the sea when the police raided the boats and might have drifted to the shore now.

But the truth may come to light later.