‘Love, Fight, Feast’ at the Museum Rietberg in Zurich was a rich melange of miniatures, scrolls, prints, lacquered boxes to store art works, writing boxes, elegant costumes, installations, among others 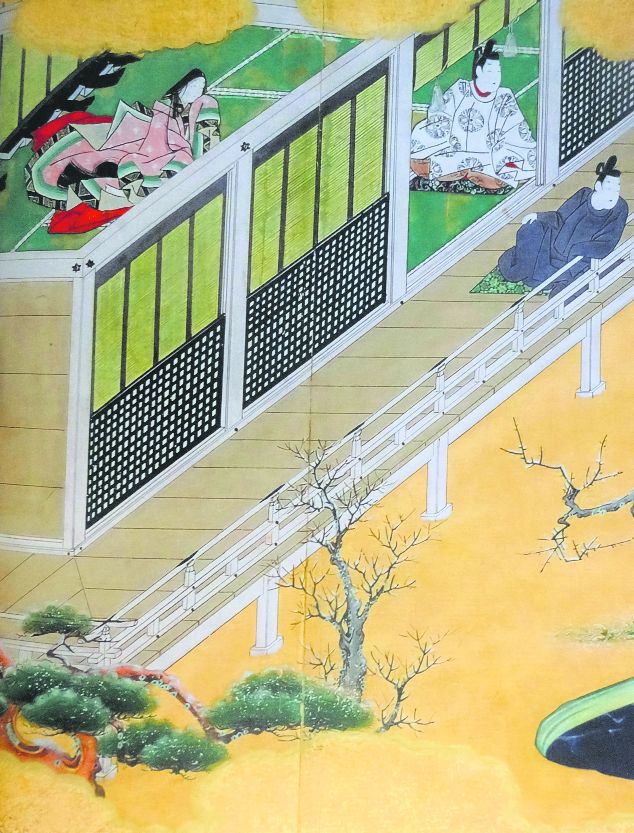 In whose reign was it that a woman of rather undistinguished lineage captured the heart of the Emperor and enjoyed his favour above all the other imperial wives and concubines?

Opening words of the 11th-century classic,

‘The Tale of Genji’, as cited in the Foreword

From an introductory essay in the Exhibition Catalogue

Very soon after I landed at Zurich a couple of months ago, within hours of it in fact, I heard about the sparkling new exhibtion at the Museum Rietberg. ‘You must see it’ was the friendly but sharp recommendation of my hosts. It was not going to be hard to get to the show since the event that I had gone to attend — a two-day symposium with Indian painting at its centre — was at that very museum. But I was putting seeing it on the back burner of my mind. The title — ‘Love, Fight, Feast’ — did not do much for me, nor the fact that it dealt with narrative art, for the genre was nothing new, Indian painting being replete with it: extensive series based on great epics like the Ramayana, and Puranas like the Bhagavata, or endless, magnificently told tales like the Shuka-saptati or the Kalakacharya Katha. In the end, however, I did go, chiding myself, to see the show together with some colleagues. And, to say it plainly, I was dazzled.

Gallery after gallery was filled — in the most elegant of manners, sensitive to space, context and rhythm — with works that shone: that is the word which comes most easily to mind. Small miniatures, long scrolls, dainty prints, lacquered boxes meant to store works of art, writing boxes, royal palanquins, elegant costumes, installations that literally moved, so to speak. Section followed section neatly separated and yet related. Historiography and Mass Production; Poets on the Move; Love and Intrigue, Parody and Entertainment, Heroes Vying for Power and Glory; Contests with Demons: they were all there. There were works which breathed fire, heaving as they did with energy; others soft as moonlight, where young women quietly dreamt of absent lovers; still others where rambunctious ‘picture contests’ were being held, or deftly-laid mansions marked with sharp-angled views, seen from inside and outside, from above and below. Pictures of lively festivals and heroic deeds, seductive nayika-maidens and simple menials, all came together. And, in a quaint kind of way, over nearly everything hovered the spirit of the first among all novels, ‘The Tale of Genji’, written by Murasaki Shikibu, a lady-in-waiting, in the 11th century. Painters and poets appear to have soaked themselves in tales of old and then soared with them. Long scrolls filled with texts and images and seals adorned palatial quarters and humble homes. Here, a poet, seeing the towering Mount covered with snow, might exclaim: “A peak that ignores/all seasons: that is Fuji/What month is it, then/that fawn-dappled flecks of white/should betray a fall of snow?”

Elsewhere, another, challenged to compose a poem of five lines, each headed by a syllable of the word for ‘iris’ (evidently lost in translation), might break into words like this: “In this familiar lovely robe, I’m/Reminded of the beloved wife/I have left behind, stretching far/Sadness, the hem of journeys.”

There were works — lovers tiptoeing out of a palace, a maiden riding on the shoulder of her lover, for instance — which did not take much effort to take in and understand, but others — like Avalokiteshwara miraculously saving people from death by drowning, a folio of the Kannon Sutra — that needed careful decoding and sharp looking. However irrelevant it might sound here, I was constantly being reminded of a time, long ago, when, while posted at Gaya in Bihar, I would make my way to a public library to read the utterly absorbing ‘The Tale of Genji’, translated naturally from Japanese into English but with the occasional erotic passage rendered, discreetly, in Latin.

The more one saw — and we spent close to two hours inside the exhibition — the more one wondered about what it must have taken to put a show of this dimension together. The scholarship of the three curators — Khanh Trinh, Estelle Bauer, Melanie Trede — apart, the sheer list of lenders to the exhibition — instituitions and collectors — was staggering, completely filling as it did two closely printed columns on one page. At the same time, one could only admire, in fact envy, the dedication of the staff manning the exhibition. The friendliness of the atmosphere created for viewers was, as always in this museum, palpable. In this case, however, I was truly struck by the detailed knowledge and the helpfulness of the guide who led us through the show: Penelope Tunstall. The name has stayed in my mind for more than one reason. At one point when she was pointing out to us something in an illustrated manuscript ensconced in a showcase, she moved a finger on the top of the glass top, and the leaf changed, turning over to the next. Intrigued by the technology — showing bound manuscripts is always a challenge — I turned to ask her if we could know more about it. “I shall find out,” she said. And truly, while we were still collecting our things at the end of the tour of the exhibition, she rejoined us, having located the promised information and gave it to me: name, phone number, location, of the ‘inventor’, so to speak.

Just then, a spry little five-year-old boy whom I had seen inside the galleries, moving from showcase to showcase, taking notes, pencil in hand, ran past us.