As the party enters its centenary year, charting the events that shaped it, and its transformation 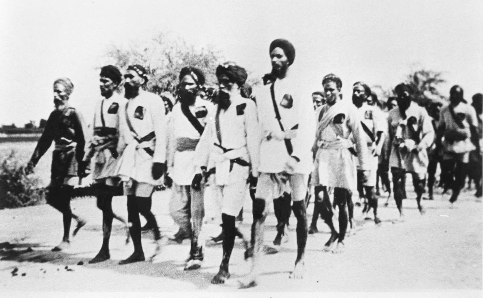 While the SGPC provided the Akali movement a well-knit organisation, the Shiromani Akali Dal furnished it with a solid base of activists in the form of various ‘jathas’, like the one at Guru-ka-Bagh (above). Photo courtesy: Panjab Digital Library

The rising tempo of struggle for gurdwara reform and the ever-increasing number of shrines coming under Akali control necessitated formation of a central body to organise and coordinate the work of reform. This became imperative when the Golden Temple and the Akal Takht at Amritsar also came under the Akali control on October 12, 1920. The Akali leaders realised that in the absence of any organised and carefully delineated line of action, the reformers might be carried away by their zeal, leading to anarchy.

The leadership of the community created three organisations -— the Shiromani Akali Dal to provide the volunteers, the Shiromani Gurdwara Parbandhak Committee to manage the gurdwaras and the Central Sikh League to provide leadership in the provincial politics. After liberation of the gurdwaras and passage of the Sikh Gurdwaras and Shrines Bill, Shiromani Akali Dal’s assigned role was over. Like the Indian National Congress, which did not heed to Mahatma Gandhi’s advice to dissolve the body after the liberation of India, Akali leaders also refused to dissolve the Shiromani Akali Dal as they found merit in encashing the heroic sacrifices of the martyrs of Nankana and Jaito tragedies to serve their political interests. Ironical as it may seem, in their quest for political power, the present-day Akalis have gone far away from the spirit of the original Akalis, and the average Sikh wonders as to which political party is going to take care of the ‘Panthic’ interests.

While the SGPC provided the Akali movement a well-knit organisation, the Shiromani Akali Dal furnished it with a solid base of activists in the form of various ‘jathas’ functioning under its control. In the summer of 1920, when the struggle for reform intensified, a number of prominent Sikh agitators came forward to take part in the movement. As the tempo of reform quickened and the struggle took a definite shape, individual efforts of the Akalis were supplanted by those of the well-defined ‘jathas’ of reformers.

Akali achievement in the past is significant not only because of the large-scale Sikh participation — with less than 2 per cent of India’s population, the number of Sikhs who courted arrest exceeded those arrested in connection with the countrywide larger movement of non-cooperation. Again, while Mahatma Gandhi withdrew the movement of non-cooperation in the country in 1922 without achieving any of the three goals — (i) restoration of the Khalifa of Turkey to his throne, (ii) righting the Punjab wrongs (over Jallianwala Bagh tragedy) and (iii) attaining Swaraj within one year — the Akalis did not stop their agitation till they liberated the historic Sikh shrines from the hereditary control of the corrupt Mahants. This is what led Khushwant Singh to describe Mahatma Gandhi’s larger movement of non-cooperation as a “pale imitation of the Akali movement”.

In the Akali movement, the Congress found an opportunity to further its own programme of non-cooperation and to strengthen its position in Punjab. To win the sympathy of the Sikhs, the Congress sent Jawaharlal Nehru, AT Gidwani and K Santhanam to Jaito (Punjab), where the Akalis were engaged in a powerful struggle against the administration. On arrival in Jaito, the Congress leaders were put behind bars. It was here that Nehru for the first time experienced what it meant to be in jail in a princely state. In a long handwritten statement, Nehru attacked the administration and the judicial machinery for their ‘unscrupulous and crooked ways’ and recorded his admiration for the Akalis in a statement written in the Nabha jail:

I was in jail when the Guru-ka-Bagh struggle was gallantly fought and won by the Sikhs. I marvelled at the courage and sacrifice of the Akalis and wished that I could be given an opportunity of showing my deep admiration of them by some form of service. That opportunity has now been given to me and I earnestly hope that I shall prove worthy of their high tradition and fine courage. Sat Sri Akal.

While a common cause kept the Akalis and the Congress together, cracks appeared in their friendship over sharing of political power in independent India. The Akalis launched a powerful struggle for creation of a Punjabi-speaking state as promised during the struggle for freedom. When after a bitter struggle their demand was conceded in November 1966, Sant Fateh Singh, a bachelor himself, greeted the news with a comment, “A handsome baby has been born into my household.”

To gain control over Chandigarh and other Punjabi-speaking areas not included in the new state, the Akalis launched a fresh agitation. To pressure the Centre, the Sant went on fast and threatened to burn himself if his demand was not conceded. Rather than immolating himself in the agni-kund, he violated the sanctity of ardas by breaking his fast on false assurances and thus joined the line of fallen idols of the Akali struggle.

However, it was left to Darshan Singh Pheruman, a devout Sikh with an Akali-Congress background, who like Bhai Lachhman Singh, leader of the ‘jatha’ which attained martyrdom for liberation of Nankana Sahib, also restored the sanctity of ardas by going on fast unto death and attaining martyrdom on the 74th day. His determination can be seen from a letter that he wrote to Indira Gandhi in response to her appeal to break the fast. “My dear child, do not take my ardas to mean any kind of pressure. The ardas of a Sikh offered with sincerity can never be intended to exert pressure on anyone or hurt anyone’s feeling. Its purpose is absolutely pure.”

A comparative study of the three most powerful agitations by the Akalis reveals some interesting facts, the most important of them being the role of the leadership. It shows how the Akali leaders in the past succeeded in channelling the popular religious upsurge during the Gurdwara Reform Movement (1920-25) into a powerful instrument for India’s struggle for freedom and brought the Sikh community into the freedom struggle.

Three distinct features of the past struggle made it more effective than its later manifestations. The first was that the Akali leadership realised the value of press and public opinion. They not only started an English daily, The Hindustan Times, with S Mangal Singh as the Founder Editor, in addition to two vernacular papers, Akali and Akali te Pardesi, but also secured support of Prof Ruchi Ram Sahni, a Trustee of The Tribune.

The second was that from the very beginning, they eschewed violence and quickly disowned the violent activities of the splinter group, the Babbar Akalis. And third, the movement was never allowed to take a communal turn. In contrast, the recent Akali leadership has failed to carry with them support of the larger section of Indian society and the national media.

During the turbulent period of 1980s, both the SGPC and the Shiromani Akali Dal failed in their duty in ensuring the sanctity of the Golden Temple by checking the extremist elements from carrying their activities from the sacred premises. Rather than fighting from the front like the past Akali leaders, they ensured their own safety by managing to get their ‘detention’ extended to stay in the safe haven of circuit houses.

A fine balance of power was maintained between SGPC and SAD so long as a veteran leader of Jathedar Gurcharan Singh Tohra’s standing was at the helm of the apex body of gurdwara management. However, with the unceremonious exit of Jathedar Tohra as president of the SGPC, and systematic marginalisation of the traditional Akalis, hegemony of the Shiromani Akali Dal on the SGPC and the Akal Takht became obvious. As goes the common saying, ‘Power corrupts and the absolute power corrupts absolutely’, corruption has become the bane of the two premier organisations of the Sikhs.

Master Tara Singh’s famous slogan ‘main maran te Panth jeeve’ (I may die so that the Panth lives) seems to have been reversed by the present Akali leadership with consequences which may be disastrous.

— The writer is the author of ‘The Akali Movement’ and is Director, National Institute of Panjab Studies, New Delhi

On the 99th sthapana diwas (foundation day) of Akali Dal, my greetings and best wishes to all their leaders & karyakartas (workers). One of India’s oldest parties, Akali Dal has always been at the forefront of serving society and raising issues of public welfare —  Narendra Modi, Prime Minister

‘Pact is for peace’

No one can deny that the stand taken by Master Tara Singh on behalf of the Akali Dal was the deciding factor in Punjab staying with undivided India at time of Partition. Akalis showed commitment to cause of freedom once again when they stood against Emergency. The SAD joining hands with the BJP in 1997 was another strong decision to show commitment for peace in the state. Public acceptability of our alliance is evident. — Manoranjan Kalia, ex-BJP state chief

At one time, the SAD was the only one that claimed to be the protector of Sikhs. Now many organisations can claim that role as the Akalis have focussed

on different issues. Master Tara Singh, my grandfather, had just Rs36 in his bank account when he died. Look at the bank accounts of the current leaders and you will know what the change has been — Kiranjot Kaur, SGPC member

Under Badal’s leadership, Akali Dal has completely digressed from its

Sikh value-based themes and wasted time and energy of the community on political hypothesis only derived out of lust for power by all means. The result