THE dangerous rate of groundwater exploitation in Punjab, attributed to water-guzzling paddy and inefficient irrigation practices, has made farmers of the state make smart choices to deal with the water crisis. Farmers are becoming receptive to the adoption of rice varieties recommended by Punjab Agricultural University (PAU).

PR 126 needs 15-25 per cent less irrigation than long-duration Pusa 44. It takes 123 days to mature if the Direct Seeding of Rice (DSR) technique is used, while Pusa 44 takes 160 days. Nursery sowing of PR 126 is done from May-end to early June and transplanting from June-end to early July.

Harvinder Singh, a resident of Manupur village near Samrala (Ludhiana district), says many farmers were interested in buying PR 126, but the seeds were not available. “I went to buy seeds in April but in vain. In the markets of other districts, the variety was sold above the fixed price. The huge demand also led to black marketeering of seeds,” he adds.

Nishandeep Sandhu of Margindpura village (Tarn Taran district) says he is using PR 126 with the DSR technique. “I started from 2 acres and now 12.5 acres are under cultivation through DSR. I have been encouraging farmers and also helping a few from my village in adopting this technique,” says Sandhu.

“The assumption of higher yield from long-duration varieties is still attracting some farmers, but these varieties pose the stubble challenge. The good news is that slowly farmers are moving towards the short-duration varieties,” Harvinder adds.

Daljit Singh of Sangrur district says he went to buy 1509 variety of basmati from PAU in April, but the seeds were sold out. “I bought the seeds from a store located outside the campus at 25 per cent higher rate. I transplanted them with DSR but their quality was not good and now I have again transplanted the crop in my entire field. Action should be taken against unscrupulous sellers,” he adds.

Gurjit Singh Mangat, Additional Director of Research (Crop Improvement), PAU, says an analysis of paddy seed sale data during the current season reveals that the recommended rice varieties have received an unprecedented response from the farmers.

“Farmers of Ludhiana, Moga, Barnala, Bathinda, Sangrur and Mansa districts of Malwa, who earlier used to cultivate water-guzzling Pusa 44 and other long-duration varieties, have opted for PR 126,” he says.

PR 114 and PR 131 were the choice of farmers in the districts of Ferozepur, Faridkot and Patiala. The farmers of Sri Muktsar Sahib and Fazilka have opted for basmati varieties Pusa Basmati 1121 and Punjab Basmati 7, he adds.

He says farmers from Haryana queued up at PAU seed sale counters at Shambhu (Rajpura) and the Krishi Vigyan Kendras at Rauni (Patiala) and Kheri (Sangrur) to purchase seeds of PR 114, PR 131 and Punjab Basmati 7. Coarse grain rice variety PR 113 maintained its popularity among the farmers of Uttar Pradesh and Uttarakhand, he adds.

Pusa 44/Peeli Pusa/Dogar Pusa: These long-duration varieties consume 15-20% more water than PR varieties, have more straw load and are susceptible to all the prevalent pathotypes of bacterial blight in Punjab. 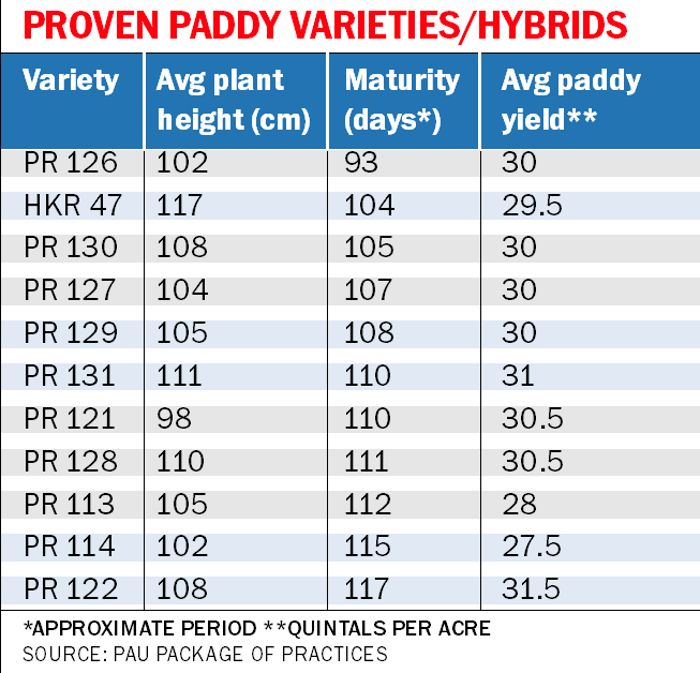