Spear and the end of despair — sport as reanimator

The soul of the nation was wounded. We needed a reanimator — only sport, the antithesis of disease, can give us that, and it did 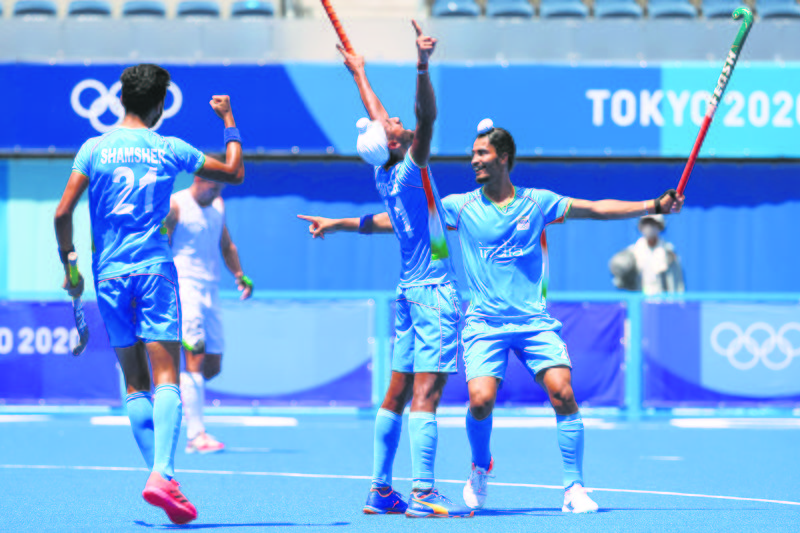 The men's team won India's first hockey medal, a bronze, in Tokyo after a barren run of nine Olympic Games and 41 awful years, a momentous achievement.

The heat is intense, unbearable, but the man runs through rows of burning pyres — his hands folded, perhaps a prayer on his lips, he pays his final homage to the men, women and children whose lease of life has been cut short by Covid-19.

It’s only a photograph, but it’s worth a million words. In April, Adnan Abidi and Danish Siddiqui — who met his own end in Afghanistan in August — shot photographs of the coronavirus pyres of New Delhi, which have become iconic. The photographs are soul-searing, laying bare the pain of those who live on, revealing the breakdown of the healthcare system. They speak to all of us who have lost friends and family in this terrible year.

August 7, Tokyo. The muscular man with a spear, his jaw set, eyes surveying the field of his dreams, flexes his arms and starts his sprint — he fairly races forward and, with one huge leap and an almighty scream, he throws the spear. His feet fly off the ground, and he lands on his hands to stop himself from crossing the line. He rises, turns his back and raises his arms. He knows he’s made a monster throw — the spear’s travelled 87.58 metres in four seconds. It’s a gold for Neeraj Chopra — a farmer, a soldier, a Haryanvi, a Punjabi, a Maharashtrian, an Indian. It’s India’s first-ever medal in track and field in the Olympics. It’s a dream Indians dreamt from the days of Henry Rebello and Milkha Singh — a medal in the most competitive arena.

Chopra put the icing on the cake, for six of ours had won medals in Tokyo before him. The haul included a second consecutive Olympics medal for PV Sindhu, a redemptive silver for Mirabai Chanu, medals for wrestlers Ravi Kumar Dahiya and Bajrang Punia. Then there was the first hockey medal after a barren run of nine Olympic Games and 41 awful years during which we endured a four-year torture of hope and mourning.

The soul of the nation was wounded. We needed a reanimator — only sport can give us that, for it’s the antithesis of disease and represents vitality. The living must go on, and forgetfulness is an indemnity against melancholy, and sport is the best anti-depressant.

That the Olympics were held at all was almost a miracle. The surge in Covid-19 cases in Japan was frightening. The pace of vaccination was slow. Public opinion was strongly against holding the Olympics. Doctors unceasingly spoke against the ‘mad’ idea of holding the Olympics — with thousands of people from across the world congregating in Tokyo, they warned, new strains of Covid could lead to disaster. At times, it seemed prudent to heed their warning. But, bull-headedly, Japan ignored the prophets of disaster — economics was a huge factor, for Japan had officially spent over $15.4 billion on the Olympic and Paralympic Games, though audits suggest the figure is higher.

The medical view, thus, was disregarded — in retrospect, that seems to be the correct decision. The Olympics were run like a perfect clockwork, virus didn’t hit the games, the pandemic didn’t spiral out of control.

The show must go on — financial activity must continue, because the misery wrought by an economic downturn could well be more long-lasting than the mayhem caused by the pandemic; but must the show go on also when a city has become a virtual war zone, with queues outside crematoriums and people waiting for hours for one miserable cylinder of oxygen, and caregivers desperately begging doctors to admit their loved ones in hospital? Perhaps not. The IPL continued for over three weeks even as the frenzy picked up in April, though some players pulled out. When cases began to emerge in the IPL bio-secure bubble, the tournament had to stop, rightly. Even one death is tragedy to family and friends — and it’s sordid business, finding the threshold of collective misery that must lead to stoppage of sport’s entertainment/business.

The performance of our athletes in Tokyo, and the resultant pride and jealousy in societal groups linked to them — Chopra was claimed by various ethnic groups as their own: Punjabi Khatri? A Jaat? Descendant of Maratha settlers in Haryana?

The society has fissures, and human identity becomes secondary to clan, caste or religious identity — Vandana Kataria played hard for the national hockey team in Tokyo, but defeat in the semifinals brought out the caste slurs. When India lost, crackers were burst outside her house in Haridwar to taunt her family, and casteist slurs were shouted at them. It’s alleged they said the team did not win because it had ‘too many Dalit players’.

What Rani Rampal, the captain, said, should make us hold our heads high. “Our team works together and is above all such things. We belong to different religions. Some are Hindu; some are Muslim; some are Sikhs,” Rani said. “Some come from the north, some from the east and south. When we play at this level, we only look at the fact that we are playing for India. We work for that Indian flag. We give our blood, sweat and tears for that flag.”

Words that would make a statesman proud. These are words that our leaders should be saying every day of their lives — but then, our leaders are not team players fighting for the flag.

Rani knows that from where she comes — poverty, tattered clothes, a mud house and the struggle for two square meals, a life of sure subservience to all — team work and performance matter, not the caste or religion of the girl passing her the ball.

Virat Kohli knows this, too. When he throws the ball to Mohammed Shami, asking him to get the batsman out, he doesn’t talk religion or caste — he talks strategy. When Shami was attacked after being taken for too many runs in the T20 World Cup match against Pakistan, Kohli spoke like a statesman. “There’s a good reason why we are playing on the field and not some bunch of spineless people on social media that have no courage to actually speak to any individual in person...” Kohli said. “This is literally the lowest level of human potential that one can operate at.”

An aside for those mourning the T20 World Cup loss: T20 cricket excites, in the words of Ian Chappell, ‘the not-so-discerning fan’. A Test series win in Australia eluded the likes of Sunil Gavaskar and Kapil Dev and Sachin Tendulkar, but the team under Shastri/Kohli/Rahane has won two series in a row in that country. This feat easily exceeds winning any T20 tournament.

Time to play, time to pray

Kohli’s sporting embrace of the players of Pakistan after a bitter and complete rout was a sign of sportsmanship, as also MS Dhoni’s friendly conversations with Pakistani players after the match.

The domineering power of religion in nearly 100 per cent Muslim Pakistan is such that even sport gets suffused with it: Waqar Younis, the fast bowler, expressed his delight that opener Mohammad Rizwan “offered namaz on the ground surrounded by Hindus… it’s really something very very special for me”.

Pakistan — one of only two countries in the world that were created on the basis of religion — got torn into two 50 years ago because the fair-skinned, tall West Pakistanis had contempt for the Bengalis and Bangla language. They refused to hand over power to Sheikh Mujibur Rahman, who was elected by Pakistanis as their Prime Minister after the country’s first general election in 1970, and their army butchered and raped millions. The short, dark Bengali — kept out of the army and bureaucracy of Pakistan — could fight back when given a hand by the Indians, the Pakistani army realised. Religion couldn’t keep East and West together. Pakistan of 1971 is a cautionary tale — diversity is good, don’t impose your idea of oneness on different nationalities in your country.

This August, Pakistanis in large numbers welcomed the rise to the power of the Taliban in Afghanistan, but they don’t wish for such rulers for themselves — they prefer the joyless, sport-less religious austerity on others. There were few happy stories from Afghanistan, and they were mostly from sport, as their team played in the T20 World Cup and the women footballers of the country escaped to the West.

In times of unprecedented contestations, sportspersons — despite depending on the powers-that-be for financial support to sustain their careers — wanted to put themselves on the right side of history.

Why did so many of them support the farmers in their protest against the new farm laws? Simple answer: a very large number of them are sons and daughters of farmers, often small or marginal ones. Many of them are just one generation removed from actual tilling of land. It’s life in the open, hard work in the fields, that have made them hardy.

A farmer’s love and anxiety for his land can’t be understood by townspeople, but sons and daughters of farmers, who play the hard sports and also guard the borders, know it. “Everyone should support them, become their voice. Do politics later. I’m the son of a farmer, I was born in the house of a farmer. My conscience is alive,” Bajrang Punia commented months before he won a bronze at Tokyo.

The father of inspirational goalkeeper PR Sreejesh is a farmer in Ernakulam, Kerala. Neeraj Chopra’s father is a farmer who travelled by air for the first time this year. The lung-busting sport of rowing has sons of farmers, such as Swarn Singh and Dattu Bhokanal. Hockey players, weightlifters, footballers, boxers, kabaddi players come from families of farmers. Many of them are from marginalised sections and untrendy occupations — Mary Kom’s father was a landless farmer, Mirabai Chanu’s father a construction worker and mother a tea vendor, Rani Rampal’s father a cart-puller, footballer Ninthoinganba Meitei’s mother used to sell fish in Imphal... People from such backgrounds do not get into boutique sports such as golf or tennis. If they, denied opportunity of education and social advancement, speak on matters of social justice, heed their voice.

Sport lifted the nation’s spirits, but there was another staggering achievement no less remarkable than Chopra’s gold — as on Christmas Day, India has given 1.41 crore of vaccine doses to eligible adults; 57.55 crore are fully vaccinated. The Prime Minister’s declaration of victory over Covid, made in January, proved premature; the success of the vaccination drive, thus, must not lure us into complacency, because Covid-19 won’t go away in the coming year, or perhaps even the year after that. It could well be a Sisyphus-like labour of futile iteration — for as fresh people get vaccinated, the vaccine’s effectiveness on earlier recipients declines. The lessons from the world of sports and the world of farmers would endure, though — teamwork and brotherhood, irrespective of invisible gods the group’s members bow or don’t bow to.