Steeped in a rich tradition 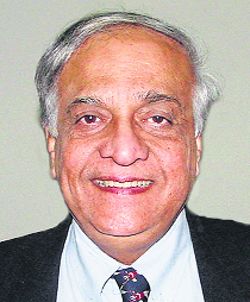 Former Editor of The Tribune

I firmly believe that the Trust-run The Tribune is a great institution, now of 140-year standing. It has been a long and arduous march for the organisation — from Lahore to Shimla, Ambala and Chandigarh — during those turbulent years, facing tough challenges. It not only survived the bloody period of Partition but also geared up its set-up and successfully met every problem.

The Tribune’s is a unique set-up. It has a distinct personality of its own. It is deeply rooted in tradition and known to be forward-looking in the pursuit of correct information. It has invariably reflected the hopes and aspirations of its readers.

The Tribune has valued its silken bonds with the readers and discharged its duty and responsibility as a custodian of the people’s trust. It has never treated the newspaper as a product. For the Trust and its Editors, The Tribune has been a live medium of communication and social commitment. It has followed high standards of independent and fearless journalism.

It was on February 2, 1881, that the seeds of The Tribune were sown by Sardar Dyal Singh Majithia, a great visionary. Since then, the institution has been taken forward by the Trust which has always had persons of eminence wedded to high principles of liberalism and value-based secularism.

The Tribune Trust is not influenced by any political or business interests. This has made all the difference in forging an enduring trust of the institution with its readers.

The Tribune has always acted as a watchdog of public interests. It believes that democracy flourishes best when the thinking class, journalists included, leads the people by pursuing right information and putting truth — unbiased truth — before the nation.

Democracy and the people’s right to information is an edifice founded on values, morality and ethics. The Tribune’s strength is its credibility and its endeavour is to live up to the reputation built over the decades as a liberal, fair, fearless and independent newspaper.

The Tribune has grown from strength to strength not because of any marketing strategy but because of its credibility in the presentation of news and views. Its sister publications — Punjabi Tribune and Dainik Tribune — have also been a major source of its strength.

The Tribune Group has been clear about its goals and commitments. Its sole purpose has been to provide its readers with objective and credible reports backed by a rich fare in news and views.

Here, I wish to recall one critical issue which came before the Trust at various points in time and also during my tenure. BK Nehru, the then President of the Trust, during my meeting with him at Kasauli, told me about a proposal from the business side to have an overarching control of the editorial. I told Nehru sahib: “I honestly believe that such a move goes against the will of the Founder and the age-old tradition of the Trust.”

The Tribune is supposed to be an Editor-oriented institution. So, I told Nehru sahib that, with the Trustees being at the helm, such a step would send wrong signals to the readers, which would ultimately affect the credibility of the paper. “I understand this,” BK Nehru seemed to appreciate my point.

That was the class of Trustees I admired most. They lived up to the great tradition of the organisation which makes the Tribune Trust uniquely different from other media set-ups. I believe that The Tribune needs to continue to promote the Founder’s vision and the philosophy espoused by the Trustees known for their eminence and stature as well as their total commitment to serve society through this great media institution.

Finally, I must say that The Tribune as an institution has been able to serve the people in tune with the will of the Founding Father. Some of its great Trustees always carried a ‘lamp within’ and acted as a beacon of light for the Editor and lakhs of The Tribune’s readers.