Stray at Home: The pariah dogs are finding acceptance

Indigenous, easily adaptable and adoptable, loved and feared in equal measure — the pariah dogs are finding space inside hearts and hearths on a much larger scale. That by no means is an indication of any loosening of the tag of ‘menace’ and revulsion associated with the Indies. Or is it? 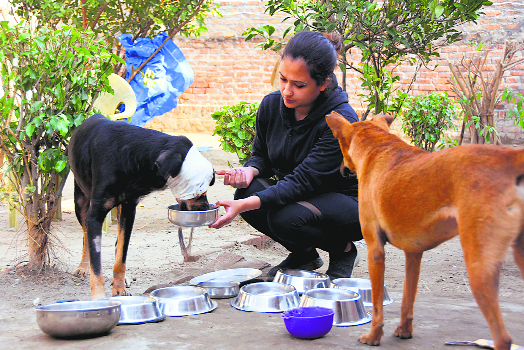 It is nearly 10 pm on a chilly night in Chandigarh. Suddenly, there’s a flurry of activity in the corridors of a sector market. Some 20-odd stray dogs surround a frail woman. Sonia Sachdeva has brought food for them. The 50-year-old former teacher has been doing so for the past 15 years.

Delhi-based Ashika Sharma doesn’t believe in the cliché that a dog is man’s best friend because in times of acute circumstances, she has found it to be the only friend. To repay this debt, in June during the lockdown, she paid Rs10,000 to hire a cab to Jalandhar to pick up an old abandoned Labrador rescued by an NGO.

German national Kelly Simone Johnson, who shifted to Bengaluru in 2009, has been rescuing Indie dogs, as these strays are called, and placing them up for adoption in the metro as well as in Germany.

Delhi-based writer, critic, journalist Jai Arjun Singh has only had strays as pets since 2008, when adopting an Indie wasn’t even in vogue. He also participates in sterilisation and vaccination drives in Saket, besides contributing time, efforts and money for the cause.

Ludhiana-based artist Sahil Jain has lent a 400-square-yard semi-built property to a local NGO, India for Animals, for use as a shelter for stray animals.

Because of their love and compassion for the Indie dog, also called the Indian pariah dog, many of these animal lovers have themselves become pariahs in their own community or neighbourhood. They remain undeterred, though, despite facing the ire of disgruntled neighbours or the wrath of RWAs, even family members.

Sonia has shifted three houses after neighbours complained to her landlord(s), calling her a ‘crazy dog lady’. Jai has often been at loggerheads with society residents as many of them have surreptitiously tried to harm the strays. Ashika had to convince her reluctant family to adopt the blind dog.

Why the fear of strays

Kelly feels it’s the lack of awareness that makes people afraid of stray dogs. She also blames the media for demonising these animals while covering dog-bite cases. Surprisingly, among the dog-bite cases in India, many studies peg the bites by pet dogs between 50 and 70 per cent.

Endorsing Kelly’s views, Jai says these uninformed adults pass on their fears to their kids. ‘Don’t go near them. Don’t touch or play with them.’All these translate into creating fear of stray animals later in life, he feels. Bengaluru-based Debaleena Ghosh, who rescues Indies and helps in their rehabilitation and adoption, is more blunt. “It’s a result of superstitions, fear, age-old beliefs instilled in us from childhood, along with lack of any real knowledge of animals. It results in cruelty not only towards the animals, but also the humans who take care of them. Harassment, physical assault of feeders and pet owners are on the rise, made worse by the apathy from the administration and the toothless laws.”

Feeding these strays is not the solution. Creating awareness, strict implementation of sterilisation and vaccination is, say most animal lovers.

Undeterred, they move on

What makes these enthusiasts go on is love, empathy and, above all, the courage to take on the haters, who outnumber this miniscule community. Each has been witness to attempts to kill, maim or injure not just the stray animals, but also those who work for the welfare of these animals.

Ludhiana-based Dr Amanvir Mann, an animal rights activist , has been on the receiving end of such an intolerant attack. One of the many neighbours who did not agree with this compassionate cause owned a Rottweiler. He made his dog attack her when she opposed a move by the RWA to poison the stray dogs in her gated community. Severely injured, she filed an FIR against the owner. It took her more than five years to get a chargesheet filed, as the police would ‘advise’ her to drop this ‘minor’ matter.

Sonia feeds 50 dogs daily in various sectors of Chandigarh. She single-handedly purchases and cooks 20-kg chicken-rice daily for her bachchas. A single woman, her only family member, her mother, passed away last year. She lost her job some months ago. Lack of funds is a perennial problem, but her zeal remains unbroken. A devotee of Sai Baba, this simple woman says she prays to the lord and help always arrives.

Past experiences have made her cautious. She starts her feeding drive around 8.30 pm on an Activa to avoid traffic and probably people. It takes her nearly four hours to feed dogs in various sectors.

Despite the attack, Dr Mann has got nearly 20 dogs sterilised with the help of local vets or under MC’s sterilisation drives, spending her own money many times, and taking care of them post-surgery.

Jai, too, has been an active participant in catching dogs for sterilisation and vaccination purposes, “which any experienced catcher will tell you, is a thankless and laborious process”, he says. “Recently, we were trying to catch an Indie for sterilisation. It went on for four-five hours. Most people were just watching and refused any request for help.” There have been instances of people hiring private catchers to take strays away to other places, but his alertness and intervention have foiled these bids.

In a country having over 3.5 crore stray dogs (2018 figures), and growing at an annual rate of 17 per cent, individual efforts are not enough. A large number of NGOs are also working to promote the cause of adoption of Indie breeds. “Adopt not shop” may be a catchy slogan but adoption of these pariah breeds has not caught on much. “It is a lot of work to find families in India who are willing to adopt Indies,” says Kelly, who has found it easier to ship these strays back home to Germany, where they have found ready acceptance. “A pedigreed dog seems a reflection of a person’s status in society. Hence, people prefer to buy expensive, foreign breeds as pets.”

Ludhiana’s Tanya Garg, who runs an NGO India for Animals, concurs. “Adoptions are a tricky business. Most of the time, it is the kids who pester unwilling parents to adopt an Indie as a pet.”

Keerthan Vignesh, who works with Charlies Animal Rescue Centre or CARE, says the NGO has strict checks in place for those wanting to adopt a pet. “We screen new pet parents and match the dog most suitable for the family, based on the number of members, kids, elderly, space, how much time a family can devote, etc. The NGO also carries out field visits and follow-up checks to ensure if the animal is being treated well.”

Based in Bengaluru, CARE was established in 2013. The NGO has been actively working for rescuing, treating and rehabilitating injured and stray animals. In 2018, it helped place 300 strays with loving families. The number doubled in 2019.

Impact of the lockdown

Lockdown has affected the adoption process this year, says Keerthan. With lay-offs and salary cuts, funds have been scarce. “We were refused funds by companies even under the CSR projects, as they preferred to focus on humans rather than animals,” he adds.

Jai agrees, “Earlier, the small-time shopkeepers, parking attendants, security guards, etc, would feed strays in their area. As the lockdown ensured a near-complete absence of humans, the strays had to bear the brunt, both psychologically as well as food-wise. When the lockdown ended, those feeding the strays earlier refused due to lack of resources.”

Jalandhar-based Yuvi Singh, who runs an NGO, the Animal Protection Foundation, says the number of adoptions during the lockdown more or less remained the same. However, there was a rise in the number of abandonments. Perhaps, it was the fear of catching the virus from the animals or the diminishing resources.

Established over a decade ago, the foundation, with 150 volunteers, saw a large number of abandonments in initial years. To put a check, they allow adoptions to only those referred to by members or volunteers.

While our ancient culture and Vedas have highlighted the importance of feeding animals, particularly strays, surprisingly, it is the young who are bringing home the Indies. Says Keerthan, “It is the younger lot which persuades the elders to adopt strays.” Tanya agrees; her NGO has only two members but 30 volunteers all between 17 and 25.

Encouraged by their parents, Bathinda-based Arnav (17) and Avni Ahuja (15) have always had either strays or abandoned animals as pets. “That’s the best way to teach empathy,” feels their mother Alpana.

Bow wow to that!

Why adopt an indie