Such repression not seen even in colonial period: Irfan Habib

Eminent historian questions the action against students on the AMU campus 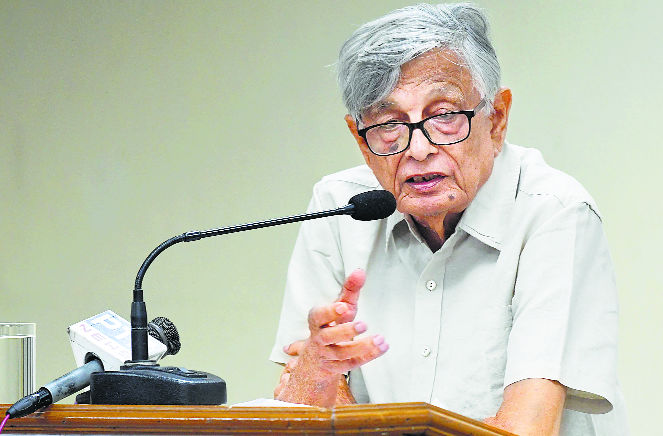 Such repression by the police was not witnessed on the Aligarh Muslim University campus even during the time of the British,” says eminent historian Irfan Habib.

Sitting in the drawing room of his house on the AMU campus, the 88-year-old speaks from his years of experience of campus life in the university town.

He has spent the better part of his life on the AMU campus first as the son of the equally-renowned history professor Mohammad Habib and later as a professor himself from 1969 to 1991.

He recalls an incident which he witnessed on the campus as a child in 1938 when the Congress government was established in the then United Province under the Government of India Act.

“The students had clashed with the police. The Superintendent of Police was an Englishman who had been beaten up by the students. Still the police did not enter the campus. Such was the restraint.”

According to him, the then Pro-Vice-Chancellor, Sir Shah Sulaiman, who later became the first Indian Vice-Chancellor of AMU, arrived to calm the agitating students, but they refused to listen. Still no action was taken against students.

He recalls the time when students had closed down the university for three days after Pakistan’s Prime Minister Liaquat Ali Khan was assassinated in 1951. India had nothing to do with it, still there had been no action against the students.

Reacting to AMU Vice-Chancellor Prof Tariq Mansoor’s defence of calling the police to the AMU campus on the ground that most of the persons detained by the police were not students, Prof Habib questioned if non-students had no rights and could be bashed up by the police.

“By calling the police, the university administration has brought criticism upon itself. They cannot get away with it,” points out Prof Habib.

He wonders about the need to forcibly vacate the hostels. “Normally when the university closes, students voluntarily go home. Till now the normal practice was to keep one hostel open for the research scholars and others who did not wish to go home. In this case, the AMU administration has not announced sine die closure of the university. They have only announced the winter vacation ahead of schedule. Then why have they made the students vacate the hostel?”

Prof Habib was in JNU when the news of the closure of AMU hostels came on December 16.

“Immediately JNU students started getting in touch with AMU’s Kashmiri students, offering them a place to stay till they could make further arrangements. So we see this spirit as well,” he says.

Responding to a large number of common people protesting on the streets of Aligarh against the Citizenship (Amendment) Act (CAA), he says he knows of a recently migrated Nepalese family which is terrified of facing action under the CAA.

Recalling the gracious attitude of the first Prime Minister Jawaharlal Nehru towards students, the historian recounts an anecdote. He says in the 1950s some right-wing MPs in Parliament had asked Nehru to conduct a survey to find out how many AMU engineering students migrated to Pakistan after completing their course.

“Wherever they go, they serve humanity,” was Nehru’s reply, leaving the MPs speechless.