The cycle of fake news, then & now

From Mahabharata to Pulitzer vs Hearst in 19th century, history of fake news is long but was never as pernicious as it is today 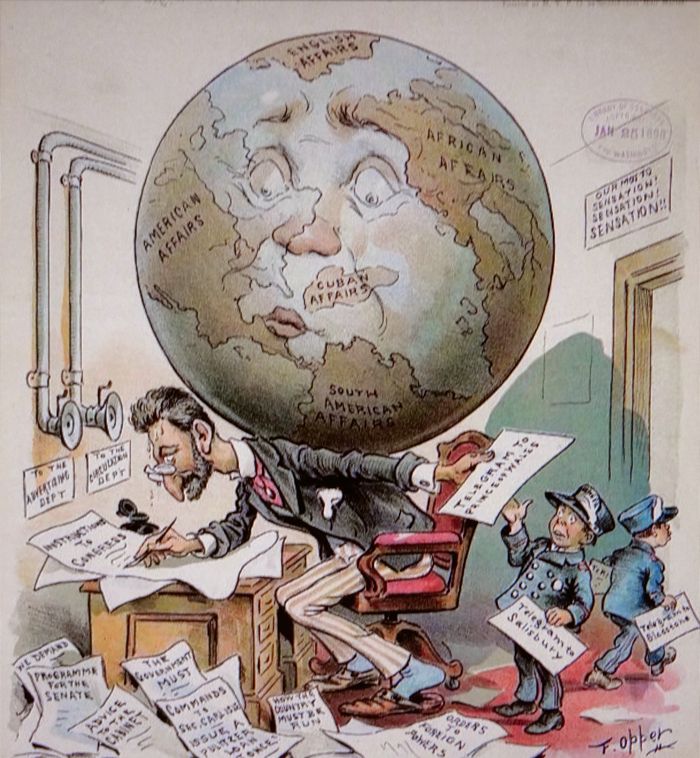 Atlas Joe': Pulitzer as the Self-appointed Manager of the Universe. Cartoon by F Opper, 1896

We don’t know what stories are supposedly true, in this world of ‘fake news’. We watch it on what I guess you would call a split-focus. It’s half entertainment and half mystery.
— Barry Levinson

A half-truth is a whole lie.
— Benjamin Franklin

A lie has many variations, the truth none.
— Old African saying

Today, as we cast about, in fact are drowning, in a sea of fake news — misinformation, disinformation, half-truths included — I thought I will travel to the past to find some solace. I did travel in that direction for a while, only to discover that the phenomenon is not new, even if the configuration, and the scale, of the issue have now changed.

Consider, I reminded myself, what happened right in the middle of the raging Great War that the Mahabharata speaks of. As one reads, the contest at one point had begun to tilt in favour of the Kauravas, when the great guru, Dronacharya, took things in his hand on their behalf on the 15th day of the war. He was virtually invincible and under his direction the Kaurava army was wreaking havoc on the adversaries. To stop him, some clever strategy had to be worked out by the Pandavas, and, after deliberation, it came to centre on the great warrior Ashwatthama, the guru’s son, of whom he was inordinately fond. That also happened to be the name of an elephant in the Kaurava army.

Bhima, the redoubtable Pandava hero, attacked and killed the elephant and, suddenly, an uproar went up, everyone shouting at the same time: Ashwatthama hatah (‘Ashwatthama has been killed’). Hearing the words in the midst of the noise, Dronacharya’s heart stopped beating for a moment. But he wanted to know for certain. Turning to Yudhishthira, the eldest of the Pandavas, who was nearby and was known never to utter an untruth, Dronacharya stopped fighting and asked if it was true. As per plan, Yudhishthira shouted out in reply: “Ashwatthama hatah iti” (Ashwatthama has indeed been killed), and added, in a lowered voice which got virtually drowned in the noise of blowing conch-shells, clashing swords, arrows whistling in the air: “naro va kunjaro va” (the man or, perhaps, the elephant). Having heard only the first words, Dronacharya, thunderstruck, suddenly lost all will to fight. He simply lay his arms down, crossed his legs, and closed his eyes. (When Peter Brook brought us to this point in his great stage-play on the Mahabharata, we saw the unarmed Dronacharya seated, completely serene for a while; he then opened his eyes, picked up a bucket placed by his side, raised it above his head and poured all the liquid in it over himself: dazzling red in colour, bathing himself in blood as it were.) Seeing this, a Pandava warrior then advanced, killing him. A half-truth had prevailed.

It has taken me long to narrate this, but it was not without a point, for being nearer home, it stands out and rankles. However, as Robert Darnton of Harvard, who has written extensively on the subject of ‘fake news’, pointed out, “The concoction of alternative facts is hardly rare, and the equivalent of today’s poisonous, bite-sized texts and tweets can be found in most periods of history, going back to the ancients.” Peddling of public lies for political gains or spreading disaffection, or simply for financial profit, has gone on for long centuries. Everywhere. What is different now, however, is the speed and the scale. Not unmindful of what has been happening in the last few years — the Trump years, to take a prominent example — he, and some others, go back to the dying years of the 19th century when it all began to pick up at the national level in the United States. A key figure in the game of spreading sensation then was Joseph Pulitzer, the very man whose name now is associated with one of the most prestigious awards in journalism: the Pulitzer Prize. In 1884, he purchased The New York World and in a matter of a year or so increased its circulation manifold by publishing sensationalist stories that had little or no basis in fact, thus earning ‘the dubious honour of being the pioneer of tabloid journalism’. But very quickly he had competition, for a rival appeared under the name William Randolph Hearst who acquired, in 1885, The New York Journal, and decided to go about his business the Pulitzer way: printing ‘sensational and salacious stories’. A fierce rivalry began, providing grist to the cartoonists’ mill. Very soon, within a matter of four years in fact, serious concerns began to grow within the community. As someone noted, “…the evil grew until publishers all over the country began to think that perhaps at heart the public might really prefer vulgarity.”

It all spilled over into the political field very soon, both publishers picking on Spain, the country that held Cuba as a colony, and blaming it, one-up, on all manner of scurrilous ground. The whole thing kept escalating and ended up eventually in what is known as the Spanish-American war of 1898. Many people called it ‘The Journals’ War’. The news media had been able to directly influence public opinion, becoming a major tool for ‘moulding the social and political climate surrounding the issue’.

Clearly, one is treading dangerous territory here. Today, as fake news keeps gathering force and spreading, the whole phenomenon is being studied with gravity. For, fake news in its modern form is different, and far more pernicious than before. As a scholar debating the subject said: “The speed at which it is spread and the magnitude of its influence places it in a different category from its historical cousins.” The who, the what, and the how, of it have all taken on new avatars.

The question that hangs in the air is whether we recognise it with all its dangers for what it is, or is there truth in the old observation that perhaps at heart the public does really prefer vulgarity? And falsehood.