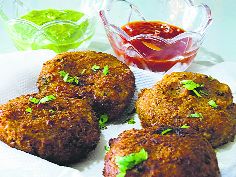 The weather these days is unpredictable. The cloudy skies with drizzle or shower and a chill in the air make us pine for fried stuff with a steaming cup of tea or coffee. Pakora and samosa involve too much exertion and rouse apprehensions about artery-choking fats and transfats. This is then the time to turn to a time-tested friend — the cutlet.

Cutlet, once described as a cut of meat and the snack of the same name, was introduced by the cooks of the Raj. It travelled easily across the length and breadth of the subcontinent on railway tracks and reserved its place in the remotest dak bungalows, where many a khansama-chowkidar took justifiable pride in their cutlets. It made use of any leftovers from the previous night’s meal to be paired with almost anything on the breakfast or teatime snack menu. Cutlets became a staple in hostel messes, clubs and canteens and railway retiring rooms and dining cars.

Parsis and Bengalis were the first to adopt and adapt to the ways of the Englishmen, and it isn’t surprising that both have signature cutlets — vegetarian and non-vegetarian in their repertoire. Kobiraji cutlet and the mocha cutlet, prepared with banana flowers, are considered delicacies. But then, for some inexplicable reason, the cutlet suddenly disappeared.

We cherish memories of the spicy mutton mince cutlet served in Indian Coffee House that, with a couple of slices of bread, made for a blissful meal. The rooftop outlet at Mohan Singh Place in Delhi is desolate now but we believe one can still enjoy it in Chandigarh. For us, it is leagues ahead of the pretentious (and expensive!) hamburger steak dished out at multi-starred coffee shops.

We share with our readers a recipe that can be custom-made at home and has been rendered healthier with sprouts, paneer/cheese. Enjoy!

Place the ingredients, except flour and breadcrumbs, in a large bowl, and mix well. Prepare a batter of pouring consistency, mixing water and flour. Divide the mixture in equal portions and shape like balls. Then press between the palms to form patties of the desired shape. Dip patties in the batter and then place on a flat tray on which breadcrumbs are spread to coat evenly. Heat oil in a non-stick pan and fry the cutlets in batches till golden in colour. Turn gently once with a wooden spatula. Remove from flame when a crispy layer appears on the exterior. Serve hot with sauce or chutney of choice. 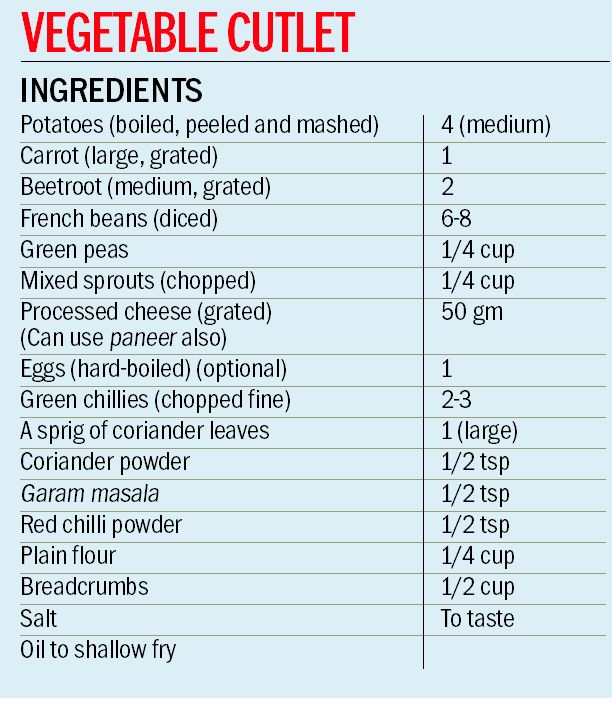