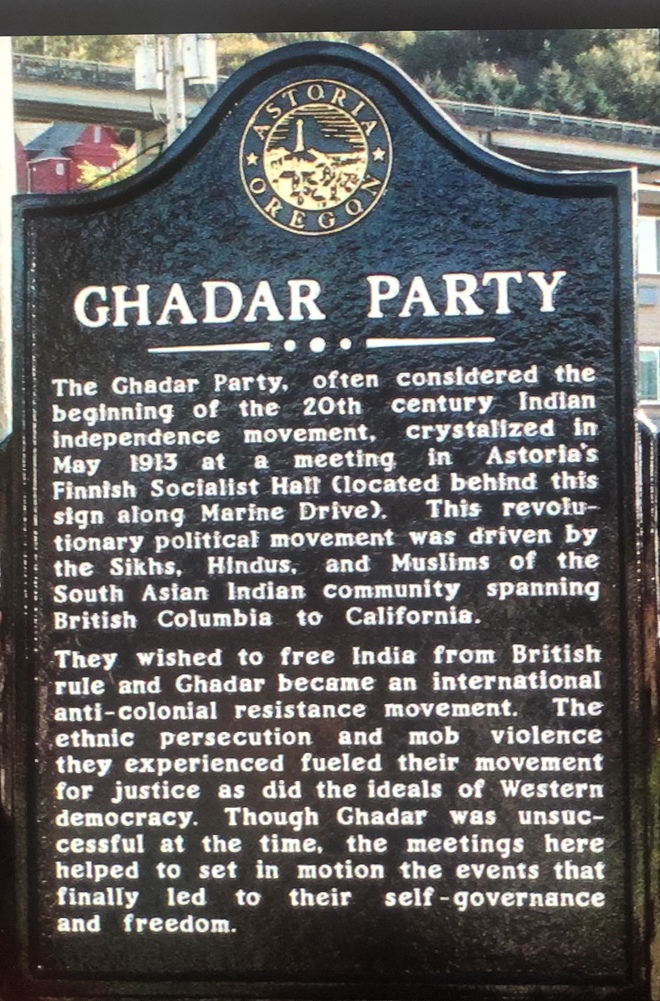 Champions of Liberty in all Lands! Be strong in hope. You are calumniated in your day. I was misinterpreted by the loyalists of my day. Had I failed, the scaffold would have been my doom. Had I failed, I would have deserved the same honour. I stood true to my cause even when victory was fled. In that I merited success. You must act likewise.

— George Washington, as cited by the Ghadar movement leaders in their paper

Breathe not his name. Let it sleep in the shade where cold and un-honoured his relics are laid.

LIVING as we do in our times — our freedom established, our Constitution more or less in place, fundamental rights, as we hear, ‘guaranteed’ — it is near impossible for us to re-imagine, or reconstruct, the image of India of a hundred years ago. Historians might do it, or at least try their hand at it, and an occasional reference/image/event might force our attention on that era. But, by and large, for nearly all of us, ‘the past’, as they say, ‘is another country’. We might keep paying sarsari homage to our freedom struggle, but the feel of what it must have been to be in those times is apt to escape us.

The Angrezi Raj, with all its ‘barkats’ which were tom-tommed by official organs was firmly there; the idea of complete independence — “poorna swaraj” — was on the other hand striking root; different voices were being raised and heard, from extreme to mild to feeble; different strategies for throwing off the colonial yoke were being worked out. Stirring times. I recall my father occasionally reciting snippets of Ram Prashad Bismil’s mantric poem — Sarfaroshi ki tamanna ab hamaare dil mein hai — but this was long after we had gained our freedom; my mother would, in a trembling voice, sing out sometimes the words of that achingly beautiful, sadness-laden women’s song — Aao ni saiyyo aj ral mal baithiye — intended to be sung at Bhagat Singh’s funeral procession, as if it were a marriage party. Why? Because is he not headed for the home of his Bride — that is Death: maut kudi parnaawan chaleya.

All this said, how am I entitled to be writing about all this? I have done no research on the period, nor have I ever been close to the sources. I do it despite this, however, for I wish to share what I came upon, purely by chance the other day: an image of the cover of a journal that a group of patriotic Indians, based in the United States, had started publishing in the twenties from San Francisco. I might have missed it had the journal not been titled: The United States of India. I had never heard of it. One knew about that fiery group, including those that founded the Ghadar Party there, but of this journal I knew nothing. Suddenly, from that page, and a few others that I was able to track, jumped out names that one had heard of, and viewed with great respect: among others, Lala Hardayal, Sohan Singh Bhakna, Kartar Singh Sarabha, Taraknath Das, Rash Behari Bose, Vishnu Pingle, Mohammed Barkatullah; Gulab Kaur. The only graphic that appeared on the front page of the inaugural edition of the journal — vol. I, no. 1 — dated July, 1923, was arresting: a young sari-clad woman, hugging a bunch of blooming lotuses to her bosom, standing atop the globe, and blowing into a thin long bugle-like instrument on which the word ‘Independence” was carved. She, meant to be seen possibly as the Motherland, looked freshly bathed and ready to plunge into action. Her hair, streaming and falling down her shoulders, spread behind her and, quite subtly, turned into the map of India. The message was clear: a clarion call was being sounded. The journal, to be published once a month, was, it declared, meant to be a ‘Review of political, economic, social and intellectual independence of India’, and it was the Pacific Coast Hindustani Association, operating from 5, Wood Street in San Francisco, which published it. The subscription? One dollar per year.

This journal, it turns out, had precedents. The Ghadar Party — Ghadar meaning rebellion — had been founded in 1913, and had started publishing a journal in Urdu and Gurmukhi, titled Ghadar. Kartar Singh Sarabha, studying then at the University of California at Berkeley, had put the aims of the party succinctly: “Today there begins ‘Ghadar’ in foreign lands, but in our country’s tongue, a war against the British Raj. What is our name? Ghadar. What is our work? Ghadar. Where will be the Revolution? In India. The time will soon come when rifles and blood will take the place of pens and ink.” The reference to movements in India that relied on ‘pens and ink’ pointed clearly in the direction of the parties that were beginning to oppose the British through legal and peaceful means: the movement that came a bit later to be led by Gandhiji, Jawaharlal Nehru, Sardar Patel, and others. This, in the U.S., was a movement different from theirs: for it was fiercely assertive, committed to violent means if left with no choice, and fearless. When its members were caught and hung by British authorities — in harrowingly large numbers sometimes: one issue reporting as many as 400 hangings between 1915 and 1916 — these journals kept publishing the names and photographs of those who had died thus as martyrs — true martyrs, not simply fearless heroes — in the cause of Indian freedom. One can question of course the methods they chose, but not their passion, the flame they kept burning in their hearts.

A wonderful poem that Faiz Sahib wrote, not about the Ghadarites but about all those who die for a Cause, says it all. Hum jo taareek raahon mein maare gaye. [There were we: killed, one after the other, in dark nameless lanes….] A lump rises in the throat as you read it.

22 hours ago
7
Nation THE TRIBUNE INTERVIEW