The Maha Virs of 8 Guards 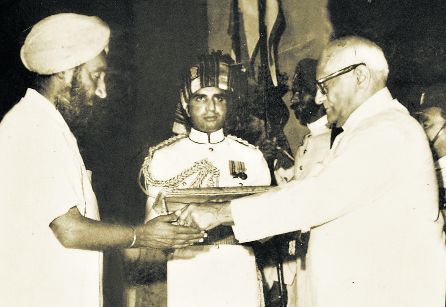 Hollywood producer Robert Evans of ‘The Godfather’ said every story has three sides: your side, my side and the truth, and nobody is lying. At a stupid border called Hilli in the eastern front of the war, the three sides had names: Lt Col Shamsher Singh, Second Lieutenant Shamsher Singh Samra and Lance Naik Ram Ugram Pandey.

Stories redolent with the truth also destroy shibboleths. Let’s do it first up. The official line then as now is that the war began on December 3 that year. That is a flat lie. What the 8 Guards with the three MVCs were tasked to do is evidence that officialdom lies.

Lies mattered less than a line. A railway line, really, at a point where the border is so intricately carved that a little boy pissing in India could find his deposit crossing an international boundary whichever way a gentle breeze blew. It is that stupid, the border 440 km north of Calcutta, that Englishman Cyril Radcliffe bequeathed. The Partition of India was in reality the breaking up of two provinces — Punjab and Bengal — by squiggly lines.

Lt Col (later Maj Gen) Shamsher Singh was the Commanding Officer of the 8th battalion of the Brigade of the Guards. His battalion was chosen to attack the Pakistani position in Hilli — Hilli is on both sides of the border, the railway station on the Pakistani side — on the night of November 22-23, well before the formal announcement of hostilities. It was to be the “bloodiest battle of the Bangladesh Liberation War”, in the words of the Eastern Command chief, Lt Gen Jagjit Singh Aurora. It was also the longest battle of attrition lasting beyond the Tangail airdrop of December 11.

The Pakistani position was defended strongly. But therein lies another story, a Pakistani one, to be narrated later. The MVC citation reads:

“Lieutenant Colonel Shamsher Singh was commanding a battalion of the Brigade of Guards during an attack on a formidable position in the Eastern Sector. The enemy had put up formidable defences with well-coordinated artillery, tank and machine gun fire combined with mines, wire and booby traps. In spite of strong opposition from the enemy, the battalion launched a series of counter-attacks during which the battalion ran short of ammunition. Undaunted, Lt Col Shamsher Singh engaged in hand-to-hand fighting. He personally directed his troops by moving from place to place and he encouraged his men to hold on to their positions and succeeded in capturing the objective, inflicting heavy casualties on the enemy.”

That was only the beginning for the 8 Guards. By the end of the war, the unit had fought five more battles. It had lost 68 soldiers in the first itself. Hours before his soldiers launched the attack, the first air war had also taken place southeast from his position. Over Boyra, three Pakistani F-86 Sabres were shot down by Indian Gnats. One of the Pakistani pilots who ejected was rescued by a certain Capt HS Panag, then adjutant for the 4 Sikh. The pilot went on to become Pakistan’s air chief decades later. (Panag, of course, is Lt Gen Panag, who retired after heading India’s northern and central commands). So much for the official line that the war began only on December 3!

Up in Hilli, where the 8 Guards had crossed the railway line, the Pakistanis put up a stiff fight. The 8 Guards were aiming at Morpara, north of the Pakistani defended position, to which Lt Col Singh assigned a Major to recce it. One possibility would have been to use vehicles but the terrain was boggy, swampy. Even the light PT-76 tanks would be grounded and sitting ducks. The Major was killed. But the position was critical. Shamsher Singh tasked his namesake, Shamsher Singh Samra, to take an RCL and head for it.

The Second Lieutenant (the rank does not exist in the Indian Army any longer) was platoon commander with ‘A’ company. Along with his men, he was held back from the destination by a machine gun nest. He pushed forward, despite taking bullets on a shoulder. After overrunning the nest, they came under fire from a flank.

“During the action, our troops came under heavy and accurate fire from automatic weapons. Undaunted by the heavy volume of fire, Second Lieutenant Shamsher Singh Samra encouraged his men to press home the attack. When the officer was about 25 yards from the position, he received a medium machine gun burst in the chest,” reads his citation. The 25-year-old from Tarn Taran, schooled at DAV-Shimla, died holding a grenade in his hand.

That was the nature of the battle of Hilli where wave upon wave of attacks were launched against entrenched and fortified Pakistani positions. Hilli was not the real objective — that was Bogra, a Brigade headquarters east of Hilli, not to be confused with Boyra. The Indians wanted to intercept that to cut off the Pakistan division headquarters at Natore with Rangpur in the north.

Lance Naik Ram Ugram Pandey was with a section that was asked to try and bypass the entrenched Pakistani position in Hilli. He was, says his citation, “commanding a section of a company of a battalion of Brigade of Guards in an attack on an enemy post. The assaulting troops were held up by heavy and accurate fire from well-fortified enemy positions. Lance Naik Pandey crawled up and destroyed in succession two enemy bunkers with hand grenades. He then took up a rocket launcher and destroyed a third bunker when he was mortally wounded and died on the spot.”

Pandey from Ghazipur in UP was killed on November 24, 1971, also before the formal declaration of hostilities. His story did not die with him. It was kept alive for more than 40 years by his widow, Shyama Devi, in Hema-Bansi village of UP’s Ghazipur district.

She kept fighting and pleading for a war widow’s dues. She lived in a dilapidated house that leaked and was open to the elements. After running from pillar to post, she even wanted to return her husband’s laurels. It was one more in a litany of how soldiers’ memories can fade unless nurtured.

Even her recent death with her requests for relief only partly met, is not the end of the twisty tale of the Battle of Hilli that saw three MVCs for a single Indian battalion among other gallantry awards.

“The battle of Hilli Bogra sector in 1971 war can rightfully be regarded as a classic example of defence in the history of warfare,” he was to repeatedly say later.

Malik refused to lay down arms even after December 16, defying the orders of his shame-faced eastern commander, Lt Gen AAK Niazi, who had signed the instrument of surrender in Dhaka. Indian troops had to drive his divisional commander to him from Natore two days later to make him hand over his service revolver.

Tajammal Malik’s 205 Brigade was the only major one the Indian Army could not break in East Pakistan. He admitted that his army had committed genocide and atrocities on the people of East Pakistan and that had made Bangladesh inevitable.

Nearly four decades after his release as a Prisoner of War and his promotion as a General, he died a bitter man, his thirst for revenge unquenched.

Frustration has sustained on both sides, despite the metal discs pinned to chests. That is the pity birthed in stupid borders.