The FM’s announcement in the Budget of a voluntary vehicle scrapping policy is aimed at reducing pollution and galvanising sales. While consumers keenly await the list of incentives and the industry as to who foots the subsidy bill, the challenges are many — an aversion to let go of possessions, lack of preparedness to deal with waste and the complex reality of the Delhi-NCR experience

The end-of-life for petrol automobiles in the Delhi-NCR region is 15 years and for diesel 10. The order was passed in 2018 by the Supreme Court as a desperate measure to rein in the precipitous fall in the national capital’s air quality index, blamed largely on emission of noxious fumes by ageing vehicles. The move substantially reduced the resale value of vehicles, but a ready market emerged overnight — be it in the adjoining states, Chandigarh, or even Madhya Pradesh and Maharashtra, which do not have such strict provisions. Environmentally, the pollution burden of Delhi-NCR continues to get shifted to other areas.

A 2016 study by the Central Pollution Control Board and GIZ (a German development company) estimated that more than 87 lakh vehicles reached the end-of-life (ELV) status in Delhi-NCR by 2015. “By 2025, the ELV numbers are expected to be 2.18 crore. Two-wheelers account for about 80 per cent,” says Anumita Roychowdhury, who heads the air pollution and clean transportation programme of the Centre for Science and Environment, New Delhi. “Old vehicles are used extensively in India,” she adds, pointing to the grim reality of how a vehicle deemed un-roadworthy and certified as having outlived life in the national capital region could change hands several times before being considered for disposal as scrap — if at all. 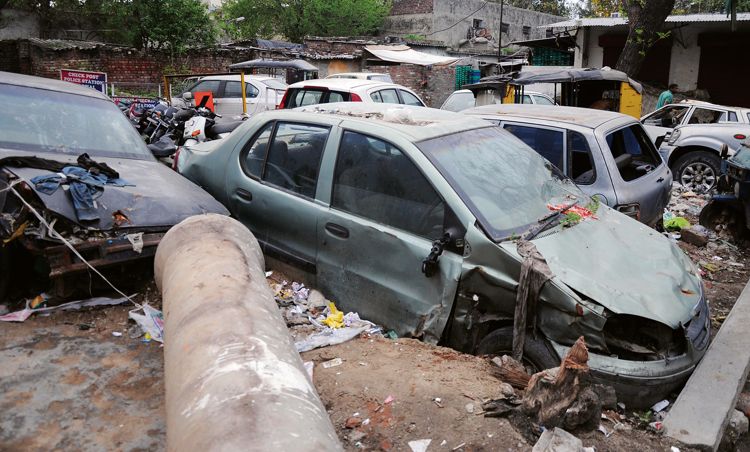 It is not just automobiles that are subjected to the reuse-recycle craft of ‘jugaad’. A vibrant second-hand market ensures a price for practically every item, but the problem arises when it comes to disposal. And the absence of a clear policy on disposal can turn it into an arbitrary, crude, unscientific and dangerous process, like in the case of e-waste.

“The Supreme Court in Delhi-NCR and the High Court in Kolkata as well as the National Green Tribunal (NGT) have made good interventions. Some cities, including Kanpur and Lucknow, initiated the phase-out of older vehicles while states like Maharashtra and Karnataka levy green tax that increases with the age of vehicles to disincentivise old vehicles. The NGT has issued a directive to identify cleaner areas in the country where these polluting vehicles could be exported,” says Roychowdhury. 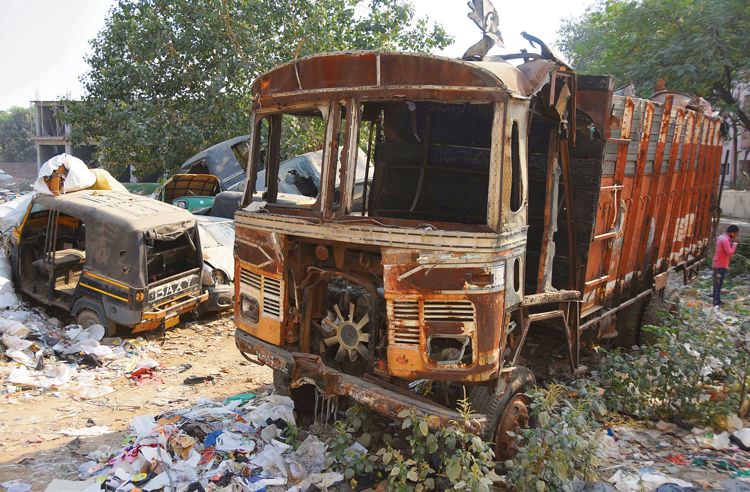 However, transferring unfit vehicles elsewhere defeats the very purpose of air pollution control to protect public health. “The fact is that most cities do not meet the National Ambient Air Quality Standards required to implement clean air action plans under the Centre’s National Clean Air Programme for the target of 20-30 per cent reduction in particulate pollution by 2024. They may have phase-out strategies for old vehicles, but in the absence of a comprehensive policy guidance and legislative backing, only some cities, where the judiciary is directing action on air pollution, have issued specific directions to cap the age of old vehicles for phase-out,” she adds.

This is one part of the story about the much-delayed but much-needed scrapping policy which the BJP-led NDA is planning to bring. There are others, including the tricky one about subsidies and incentives. Who will foot the bill, the government or the company, to replace the vehicle offered voluntarily for scrapping? And what do states have to say?

In her Budget speech on February 1, Finance Minister Nirmala Sitharaman said the government will “separately announce a voluntary vehicle scrapping policy to phase out old and unfit vehicles”. This, she added, will help in encouraging fuel-efficient, environment-friendly vehicles, thereby reducing vehicular pollution and the oil import bill. Vehicles would undergo fitness tests in automated centres after 20 years in the case of personal vehicles, and after 15 in the case of commercial vehicles.

Officials say a draft note is being finalised for Cabinet approval. Several rounds of inter-ministerial consultation have been held, and the states would need to be brought on board.

Minister of Road Transport and Highways Nitin Gadkari’s post-Budget observations did indicate the broad outline of what the policy, expected to stimulate investment of Rs10,000 crore and create 50,000 jobs, will look like. “The policy would cover an estimated 51 lakh light motor vehicles (LMV) that are above 20 years of age, and another 34 lakh LMVs above 15 years. It would also cover 17 lakh medium and heavy motor vehicles, which are above 15 years, and currently without valid fitness certificates. These are estimated to cause 10-12 times more pollution than the latest vehicles,” Gadkari said, highlighting benefits like recycling of waste metal, improved road safety, reduction in air pollution and oil imports due to greater fuel efficiency.

With India becoming an automobile hub, the industry turnover is expected to more than double in the years to come. The policy, it is being claimed, will boost new technologies with better mileage and promote green vehicles, strong hybrids, electric vehicles, and those running on alternative fuels like CNG/ethanol, etc. It is estimated that one crore vehicles will be scrapped for harvested material like steel, plastic, rubber and aluminum used in the manufacturing of automobile parts, thereby reducing their cost by 30 to 40 per cent.

The keyword here is ‘voluntary’, and those opting for scrapping will be incentivised, apparently by the manufacturer. Those who opt out will have to pay green taxes, higher levies, registration charges, etc. Such vehicles will also have to undergo strict fitness tests. Vehicles that fail will face heavy penalties and can also be impounded. The green tax is to be used for reducing pollution. Farm equipment like tractors, tillers and harvesters is expected to remain out of the purview.

Industry experts agree the policy will boost efforts to position India as a global manufacturing hub, help clean the environment and improve road safety. However, there are speed-breakers that need to be dealt with, like incentives.

A top industry representative, who did not wish to be identified, said for the policy to succeed, the major chunk of incentives should come from the government. “It has already announced disincentives, but there must also be clear incentives. On any car sale, the manufacturer makes 10 to 15 per cent and the government more than 50 per cent by way of taxes, registration, etc. Therefore, the government should give incentives for every incremental vehicle sale. The whole concept is based on incrementality rather than revenue loss, assuming that the vehicle will not be sold if the policy is not there,” he explains.

There is more. Industry watchers say the concept (of a scrapping policy) came when India, Delhi-NCR in particular, was fighting environmental pollution. However, while the industry made the transition in Bharat Stage (BS) emissions standards from III to IV to VI, old vehicles kept operating. “Earlier, it was called the Voluntary Vehicle Fleet Modernisation Programme. It was after the industry and economy hit a rough patch that growth became a priority. But the transition from BS-IV to BS-VI (in 2020), which reduced emissions substantially and improved road safety, came at a huge cost to the industry,” points out an industry representative. In other words, the government may be open to offering more incentives but the industry may not be as keen to increase its share on the grounds of an economic slowdown and investments made to ‘leapfrog’ to BS-VI. This even though the policy is expected to affect car-buying, usage patterns, and increase demand.

Roychowdhury says old, ill-maintained and malfunctioning vehicles can become energy guzzlers and emit high amounts of heat-trapping carbon dioxide that causes global warming. The other tangible benefits from the policy are scientific disposal and recovery of waste. Recycle and reuse can contribute towards import substitution and improve India’s balance of payments.

“The ultimate scrappage policy is to minimise the environmental footprint of junk vehicles and clunkers. This requires maximum recovery of material for reuse, an increase in the share of recyclable material, and a reduction in the usage of environmentally harmful materials. This calls for a strong waste recycling and recovery system and cooperation from manufacturers.” Great expectations, but not impossible ones.

Currently, a vehicle that has outlived all its possible uses is sold to a ‘kabaadi’, who pays by the kilo. Automobile expert H Kishie Singh says India has no organised system of disposing of a car or any motorised vehicle. “Different countries have different policies for scrapping old/unfit vehicles. No country has a foolproof system that can be emulated. England, France and Germany have a ‘cash for clunkers’ policy that has not been successful. The government is said to be considering new taxes for those who opt out. But taxing and re-taxing is not the solution to pollution, rather the whole exercise is counterproductive,” he says. Therefore, Singh says, any policy India formulates has to be an original one. “It should have different classes for different cars. For example, vintage and classic cars should be a separate category. Every component in a car can be recycled and the scrapping policy should address these aspects intelligently. For example, in Canada, old tyres are used to build roads. Rims and engines can be melted to create a new economy. Which is why the policy should pass through a whole lot of thought and experts who know automobiles and engines well.”

Vehicles to be exempted