The singer and the mystic: A tribute to Nusrat Fateh Ali Khan on his 25th death anniversary : The Tribune India

The singer and the mystic: A tribute to Nusrat Fateh Ali Khan on his 25th death anniversary 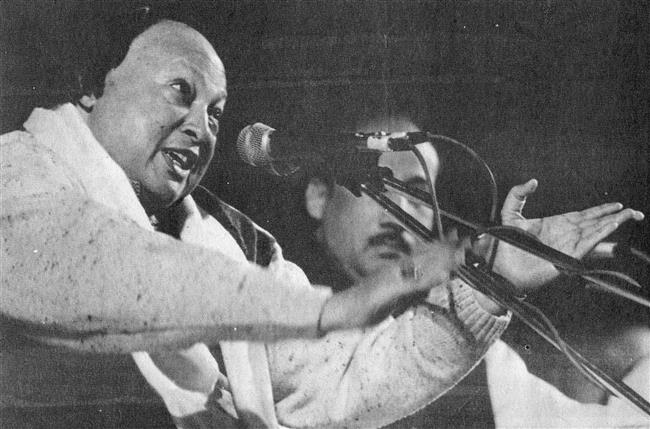 His music was the umbilical cord that tied India and Pakistan to the common cultural heritage.

Punjab’s religious traditions have had an intimate relationship with poetry and music. Both have complemented and enriched each other since the medieval times. Sheikh Al Hujwiri (Data Ganj Baksh), who was among the earliest Sufis to settle in medieval India at Lahore in the early 11th century, makes an interesting reference to the role of sama, a musical performance, at Sufi shrines. In his famous Sufi treatise Kashf al-Majhub, the mystic states that sama is a divine influence which stirs the heart to seek God and those who listen to it spiritually attain God. The religious orthodoxy, however, has not always been receptive to music. This debate over the legitimacy of music once erupted at the court of Sultan Ghiyasuddin Tughlaq, who summoned Sheikh Nizamuddin Auliya to know his attitude towards the practice of sama. After having heard competing arguments for and against the practice, the sultan was convinced on the merit of Sufi music and instructed that no one should prevent the saint from doing so. Chishti Sufi shrines were, thus, permanently endowed with the gift of music.

It is not surprising that most important singers, poets and musicians from Punjab had an association with Sufi saint mystics and shrines. The Partition in 1947 severed this vibrant legacy since most important gharanas migrated to Pakistan. While the Pakistani state officially legitimised Sufism, the question of music always remained a site of discomfort and debate. Ustad Nusrat Fateh Ali Khan, however, was an exception. He inherited the centuries-old tradition of sama-qawwali. Once he had a dream, which later became his desire, to perform qawwali at Ajmer Sharif and he finally got an opportunity in 1979. His fame and popularity can also be traced from this juncture. Nusrat’s ancestors sang at Sufi shrines pre-Partition. His parents hailed from Basti Sheikh in Jalandhar and migrated to Lyallpur post-Partition. While he could fulfil his dream of visiting and performing in India, there were many who weren’t so fortunate.

One of the major aftermath of Partition on the Sufi shrines in east Punjab was a sudden break in the performance of ritual practice. Sama-qawwali gatherings were its essential components. It is not a coincidence that once these shrines re-emerged, among other things like ziyarat (pilgrimage), langar, etc, it was qawwali samagams that were reinstated. Nusrat Fateh Ali Khan’s compositions played an important role in this milieu. There were very few practising qawwals, and shrines mostly reverberated with Nusrat’s voice. This milieu became very prominent in the 1990s, after the Sikh militancy waned. His recordings were in large circulation and were widely copied on cassettes and CDs/DVDs. The circulation of his music emerged as a powerful medium of negotiating and communicating with pre-Partition memory.

Nusrat was not particularly bound by the limits imposed by the emerging cassette industry in the 1980s and 1990s. His were seamless performances, a character he shared with very few others. In some ways, he remained deeply rooted in the qawwali tradition. But he didn’t shy away from singing ghazals and a few Bollywood songs. He could effortlessly blend a shabad, doha, kafi or qissa into qawwali performances. This inheritance allowed him to sing with ease the compositions of Sufi mystics and poets, as well as compositions of Kabir, Ravidas and the Sikh Gurus.

His music was a slow unfolding of his soulful voice and stood tall even in the midst of the rising reformist tendencies of Islam in Pakistan. It may not be a coincidence that the increasing grip of the Taliban in the 1990s coincides with his death in 1997 (August 16). In the past two decades, every major Sufi shrine in Pakistan has been a site of bombing.

Nusrat’s music provides us with a language that traverses religious boundaries and competitive religious nationalism in South Asia. The language of an aashiq that is not limited by Partition, rather provides us with continuities. Even while deeply rooted in Hindustani classical tradition, his music appealed both to the devout and the ordinary, despite its humble dependence on harmonium and tabla. His music was the umbilical cord that tied India and Pakistan to the common cultural heritage. His French biographer, Pierre-Alain Baud, describes Nusrat as “God’s madman”.