Across Himachal, Punjab and Haryana, traditional building techniques were long forgotten. Now, there is a determined effort to gather ancient wisdom and place it in the present context 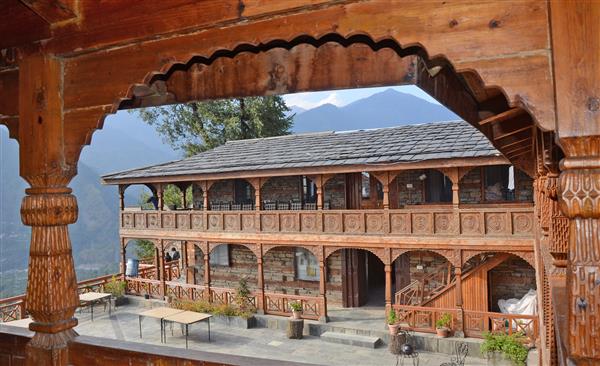 Built in Kathkuni style, Naggar Castle in Kullu survived the devastating earthquake of 1905 and is still standing tall more than 550 years after it was built. tribune photo: Jai kumar

The earthquake that jolted Kangra region on April 4, 1905, came with a preliminary tremor followed by three distinct shocks. The epicentre in Kullu was at Larji, but the loss of human life here nowhere reached the same proportion as in Kangra, “a fact which was due to the better style of house-building prevalent in the sub-division,” says the 1917 Panjab District Gazetteers. The timber-bonding in the houses held them together long enough, in most cases, for the inmates to escape, it notes. Measuring 7.8 on the Richter scale, the quake claimed close to 19,000 lives in Kangra. In Kullu, 827 died.

In parts where the “Kullu type of architecture was not in vogue”, losses were too huge to be counted. Sultanpur, home to the erstwhile king, and Larji saw absolute devastation. But at nearby Banjar, the newer tehsil, the treasury, thana and hospital were all timber-bonded and escaped with little damage. So did the castle at Naggar, having much wood in its construction. In Spiti, the houses, built of mud with twig roofs, suffered considerably, but no loss of life was reported.

A century on, that traditional building technique — Kathkuni — finds few takers. And why just Kathkuni, from Haryana’s daat ki chhat (a brick dome made without shuttering) and Punjab’s brick and wood roofs to the mud houses in Spiti and Kangra, traditional structures have been rapidly demolished and replaced by homogenous concrete structures. Attempting to thwart this pace of degeneration are some institutions and individuals who are trying to make people understand the importance of traditional practices in architecture, while keeping in step with technology.

The late Delia Narayan, famously known as Didi Contractor, is the tallest name in the field. Based in Sidhbari, Kangra, she was perhaps the first to make people aware of what they were losing out on. However, she also incorporated modern technology to make structures sturdier while keeping them rooted in the environment from which they evolve. She died last July, but leaves behind several trained artisans and architects propagating an alternative architectural response.

When Naresh Sharma first began working as a carpenter’s helper on Didi’s house in 1994, he wondered why she was going backwards towards a mud house when everyone around was moving forward and embracing pucca houses. Then 19, he was to soon learn the beauty of traditional material, the role of sun and air, the ecological cost of carbon footprint... Today, Naresh is a contractor and designs homes too. He is presently constructing a resort at Khanyara, also in Kangra district.

“Traditional Kangra homes are mud walls and bamboo roofs, but at the time Amma came here, most of us were in the process of tearing down old homes and replacing them with concrete structures and tiled floors,” he says. Didi gave him life lessons his own people had forgotten. “She would tell me we have no right over a deodar tree, which has taken 1,000 years to reach where it is today. She went for other varieties like kayal and rai.”

Architect Lakshmi Swaminathan closely worked with Didi during her last years. She took to natural materials once she understood the consequences of modern building materials. Lakshmi says natural materials pollute less in their manufacturing process and leave less waste when a building is demolished. Industrial material is used, but judiciously. “Since Kangra falls in seismic zones 5 and 4, making it highly prone to earthquakes of destructive intensity, we need ring beams at different levels in the building — plinth beam, lintel beam and in the foundation — to connect the entire periphery of the building. Earlier this was made from wood, but we use concrete. At times, I-girders are used in the rooms if the client wants a bigger room because the wooden planks in the market do not measure more than 10 feet,” she says.

Naresh says if a person is building a home from natural material on a 3 to 5 kanal plot, most requirement of mud and stones will be met from the land itself, reducing the carbon footprint to a minimum or zilch. Lakshmi says that since a natural home employs renewable resources, the waste doesn’t go into a landfill. Aesthetics and emotional connect apart, these materials regulate internal temperature, keeping homes warmer in winters and cooler in summers. They regulate humidity and absorb sound too. The high temperatures in Kangra this year are all the more reason why one should go in for traditional architecture, insists Naresh.

And there are takers. With the need to connect with nature felt severely during the Covid pandemic, many are turning to natural living. The urge to dish out something new to people has also led the tourism industry to experiment, says Chandan Sharma, who realised this close to two decades ago and added elements of Kathkuni to his cottages in Kullu’s scenic Naggar village. At Naggar panchayat’s newest tourist hub Jana, Harish Thakur dismantled his old Kathkuni house a few years ago. In its place now stands a Kathkuni resort. He reused most of the stones and wood from the old building where roofs were constantly leaking during rains.

The more than 550-year-old Naggar castle, a heritage hotel, stands tall a 100 years after the quake, the wooden beams a particular distance apart, in a fashion that modern architects have given a new name: a “Lego-like” structure. This is Kathkuni for you, the word literally meaning wood (kath) at the corners (kuni). Mason Roshan Lal says a typical Kathkuni building is one layer of stone followed by one layer of wood above the foundation, held together without mortar or metal nails. The logs are interlocked through wooden braces or joints. “Nails come off during a quake, but the wooden joints take back their place.”

Interestingly, Kullu valley today is a curious mix of old and new Kathkuni structures. While the landscape is dotted with concrete homes, it is easy to spot a flashy new Kathkuni resort or home. The old ones are dilapidated, hinting at the economic status of the family that owns it. The glaring time gap owes itself to the market-driven idea of house building.

Architect Rahul Bhushan, who shifted to Naggar a few years ago, says this gap also owes itself to a lack of experts who could explain to people the need to stick to the roots. “Our temples like Hadimba mandir in Manali have survived for centuries. And from Kinnaur to Kullu, as also Istanbul and Switzerland, indigenous construction practices have been similar because these emanated from our roots. And we are talking about times when there were no means of communication.” Rahul now takes workshops in sustainable architecture, offers internships and fellowships, besides taking up restoration and construction projects.

In Spiti valley, Kimberley Moyle, from Australia, is also working to fill that gap by encouraging locals to preserve old homes. The one thing she noticed all over the world is concrete boxes replacing traditional homes. “Traditional architecture is a natural reflection of your culture,” she says, adding, “which is why houses in Kerala look so different from houses in Rajasthan and houses in Spiti different than those in Punjab. These houses use local materials suiting local climatic context. And we are not just losing the buildings but also the knowledge that goes into making them.” However, the seismic vulnerability of Spitian homes remains a concern. This, studies say, can be reduced by using timber in the walls and girders for roofing.

In neighbouring Punjab and Haryana, the courtyards are all gone; bricks, lime and mud have given in to RCC construction and karigars have taken up other professions. As such, when Karnal-based architect Anshu Ahuja was looking for a person to do a thatched roof for a farm in Najafgarh, he had a tough time. “It was a typical Delhi farm with lawns all over. There was a cuboid structure in their midst with 12-15 foot glass ceiling to lintel level of 7.5 feet. During summers, that place would become a burning chamber. As the owners began to understand the importance of natural living, they invited me to redo the place. We took the plaster off the walls and used lime, known for its cooling properties, for replastering.” However, when it was time for roofing, there was no one to do it. “I travelled through villages around Karnal for about 800-900 km on a scooter. In the end, I did find a couple of karigars who were still doing cob walls and thatched roofs for their own homes.”

Among those marrying tradition and modernity is architect Jitesh Malik, and Aanandaa Permaculture Farm near Boonga in Haryana has been his major project in sustainable architecture. Here, he has explored several construction technologies and designs to come up with a natural and energy-efficient home, complete with rammed earth walls and four kinds of roofing techniques, among them daat roof of Haryana (still in vogue in Rohtak area) and Madras tile roof from the southern repertoire.

Lack of know-how and karigars practising traditional methodology mean high costs. Anshu says he always tries to make clients understand from where the material is coming and why it is so important for the lifespan of the structure and thatching. Affordability, as such, becomes a subjective term. “Would you call an RCC construction with ACs running for most part of the year affordable? Traditional architecture is labour-intensive and slightly on the higher side, but once people are clear that they do want to go natural, they go for it,” he says.

Jitesh says increased interest in sustainable living isn’t complemented by the rules and regulations. “You cannot construct a mud wall in Chandigarh legally,” he says, adding that lack of R&D in structural engineering vis-a-vis traditional architecture has stopped it from moving with the times. Kathkuni makes use of a lot of wood, but can you buy as much? Also, depleting forests are a huge concern. Naresh says the government gives loan for a concrete house, but not for a mud house.

Perhaps it is time for collective thinking in this direction.

Attention to traditional practices that sustained the environment in the past over a long period of time can offer clues toward sustaining architecture for the future. Traditional architecture usually rests on people’s observation of nature. Ultimately we depend on nature, and so destroying nature is ultimately destructive to us. We have to work now to re-establish our dialogue with nature, and with the past, if we are going to have a future. — Excerpt from the upcoming book ‘Conversations with Didi Contractor’

A basic RCC construction usually costs Rs 1,500 to Rs 2,500 per sq ft. Naresh Sharma of Kangra says a mud and bamboo house would cost around Rs 2,000 per sq ft. Anshu Ahuja says a cob cottage and bamboo thatching could cost around Rs 1,000 to Rs 1,500 per sq ft and lime construction around Rs 2,100, including rainwater harvesting, grey water treatment, electricals and in-built furniture (wherever possible). These costs, however, vary from site to site, depending upon the availability of natural material and skilled labour.