Travelling with and through books

Told through the eyes of an Englishman, ‘A Brief History of Ancient and Modern India’ and the illustrations it encapsulates narrate the ideals and the hubris of our then colonial masters 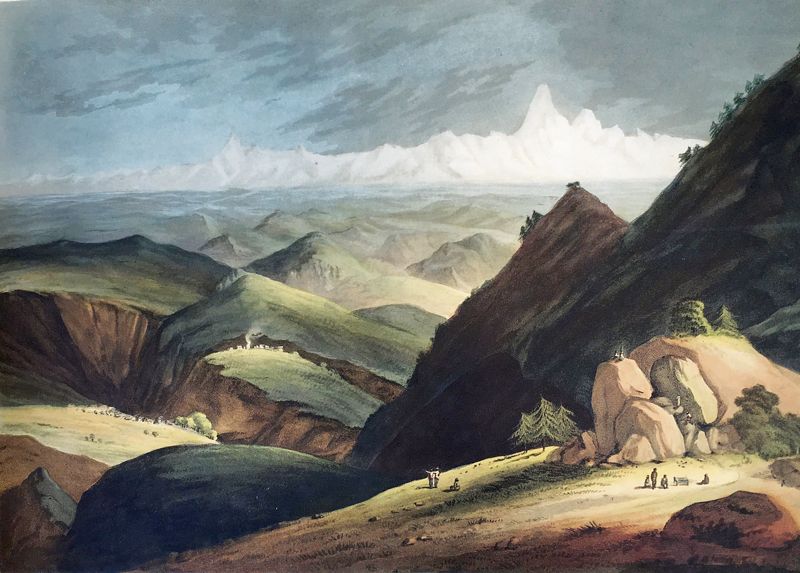 The ‘Thebet Mountains’; (right) portraits of ‘Native Judges and Officers of Court of the Recorder, Bombay’. images courtesy: Nirupama Rao

To a bibliophile, there is but one thing better than a box of new books, and that is a box of old ones. — Will Thomas

That a Nation can be truly prosperous, only when it has a King who makes Justice the basis of his Government, and a Constitution which, while it secures the Liberties of the Subject, maintains a due Subordination in the several ranks of Society; and where the Integrity of the People, secures to each Individual those advantages which Industry creates and cultivates. — Epigraph, interpreting the carving on the façade of the old East India House in London

AS I sat, a couple of months ago, in the home of a bibliophile, taking in and savouring the sight of books, old and new, that kept peeping out and then emerging from neat shelves, a famous utterance of Argentinian author Jorge Luis Borges came instantly to the mind. “I have always imagined,” he said once, “that Paradise will be a kind of Library.” For long, my gracious host and I kept poring over a seductively rich range of books — first editions of classics among them, with authors’ handwritten notes of dedication on some — and as the evening grew, a peculiar cheer seemed to descend and settle down in the room. 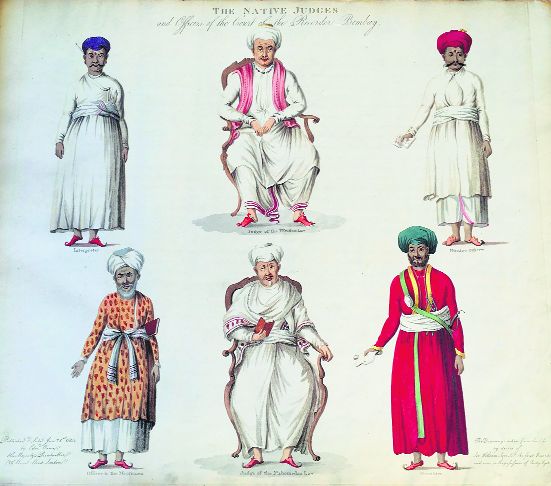 I kept moving from one title to the next but got stuck on two elegantly bound volumes — first editions, obviously — which were clearly connected, one of them serving as some kind of an appendix or adjunct to the other. The main volume, published from London in 1805, and titled ‘A Brief History of Ancient and Modern India’, bore the name of Francis William Blagdon, Esqr, as its author, and had a number of illustrations. I was drawn to it, being involved as I currently am in work that was being done around that time by Indians in the area of painting. I did not know much about Mr Blagdon but learnt that he had risen from being a newsboy for a small newspaper to becoming an author of several books, including this one. His account of India’s past, covered in close to 20 closely printed pages, did not contain much that one did not know, and was based for the most part on histories that had been written by Englishmen translated from Persian sources. What was different, however, in the account was the latter half of the history which documented, in a fresh manner, the current conflicts that involved the English and French East India Companies, and the Maratha powers. The year of the published writing was 1805, so close to the Anglo-Maratha Wars, one of which had just concluded. It was contemporary history in other words, projecting naturally the English point of view: something that lent it a flavour of its own.

When one moved on to elegantly printed illustrations, one saw that they were mostly based on the earlier work of the Daniells, who had travelled extensively in India a few years before and produced some of the most celebrated views of India in the fading years of the 18th century. These images, attractive as they were, did not hold me for too long, however, for I had seen them earlier and had even written on a selection of them. But what I was completley arrested by was the title page of the volume, filled as it was with elaborate descriptions of what the book contained — ‘from the earliest period of antiquity to the termination of the late Mahratta War’; ‘embellished with coloured engravings from Richard Chase Esqr’s collection of pictures painted in India’, and so on — and a graphic design of circles and ovals and curlicues, even two intertwined serpents, within which were other descriptive words. What fascinated me most on this page, however, was not the text but the elaborate graphic at the top of the title page which served as the frontispiece: a complex group of allegorical figures based on the carved pediment of the portico to the East India House in London, the recently re-modelled home of the East India Company. In this graphic could be seen, encapsulated, the ideals, and the hubris, of our then colonial masters. It needs patience to decode the meaning, and the significance, of the 15-odd figures which make up the composition, and it is best perhaps to reproduce, exactly, the text which contained its description on the page that followed. What the frontispiece showed was:

Commerce, represented by Mercury, attended by Navigation, and followed by Tritons on sea-horses, is introducing Asia to Britannia, at whose feet she pours out her treasures — the King is holding the Shield of Protection, over the head of Britannia, and of Liberty, who is embraced by her. On the side of His Majesty sits Order, attended by Religion and Justice. In the background is the city Barge, &c. near to which stand Industry and Integrity. The Thames fills the angle to the right hand, and the Ganges the angle to the left.

Whatever the truth behind vaunted claims was, the Thames was represented by a bearded man, lost in thought, lying on his side, while Ganges by a saree-clad woman, bare of midriff, lying on her side at the other end, and holding aloft a flower-stalk, perhaps meant to be a lotus. Asia, at the same time, was a turbaned man bending low at the feet of the maiden Britannia, and Liberty was a young boy clinging to her, standing next to the King who looked like a Roman cohort more than the King of England. But the import of the whole composition was clear: we, in England, armed with ideals, are the people who can offer protection, and those of Asia are destined to remain in the lowly position of laying treasures at the feet of authority-wielding ‘conquerors’. The message being sent through beautifully bound and printed works was one that was related to another time, another place.

This is exactly what Jhumpa Lahiri meant when she wrote: “That’s the thing about books. They let you travel without moving your feet.” In this case, the travel I was taking, sitting in that elegant room, was not through space, but through time.