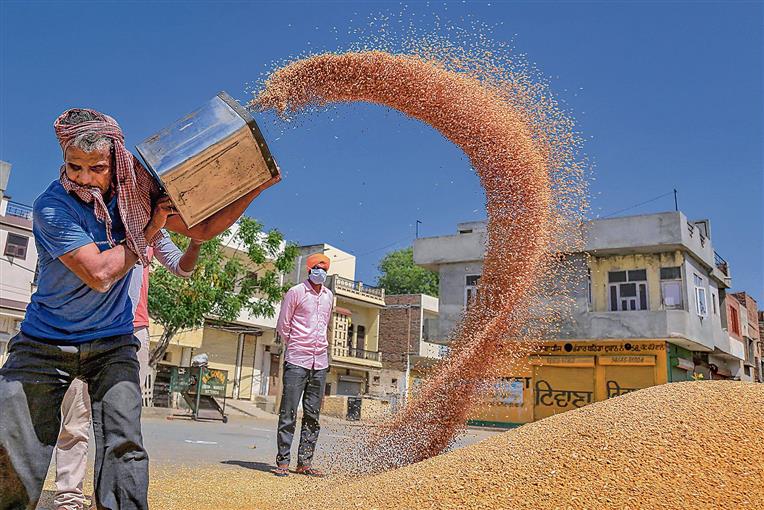 The smooth running of agricultural operations is crucial for the economic growth of Punjab.

NEK Singh, a small farmer of Khokh village near Nabha, has been staging a dharna at the Shambhu barrier in Rajpura along with hundreds of other farmers. He says the prospect of economic slavery through the proposed abolition of Agricultural Produce Market Committees (APMCs), once the private market yards are established under the Farmers’ Produce Trade and Commerce (Promotion and Facilitation) Act, has forced him and many others to protest. “If a mass movement against the move to abolish the existing mandi system has started during this time, when paddy is being harvested, you can understand how serious the issue must be for farmers,” he says.

Being an agrarian economy, the smooth running of agricultural operations is crucial for the economic growth of Punjab. The move to abolish APMCs, if successful, threatens to tear the socio-economic fabric of the state, simply because of the huge unemployment it could create. The private market yards, if established, would need neither commission agents nor arhtiyas and labourers in mandis, and farmers would eventually get much less for their produce.

The repercussions for Punjab are huge in case these mandis were to be abolished. “The state has spent thousands of crores of rupees on creating infrastructure in 151 principal market yards, 284 sub-yards and 1,430 purchase centres, and buying 13,300 acres of land where these yards are situated now. If these APMCs were to be abolished, the 33,000 commission agents, their 50,000-strong support staff and three lakh labourers will be rendered unemployed. Last year, the agents got Rs 1,611 crore as commission for buying the produce and labourers got Rs 1,100 crore as labour charges. Once private mandis become operational, these people will become redundant and lose income. The new laws appear to be a conspiracy against Punjab, meant to destabilise the state, just as the SYL canal project had ruined the state decades ago,” says former minister Lal Singh, now the chairman of the Punjab Mandi Board.

Little wonder then that for the past two weeks, Punjab has been on the boil because of the purported move to abolish the APMCs. These APMCs were established in the early 1960s to protect farmers from price misinformation. With the establishment of mandis, farmers were assured of knowing the exact price for their produce and a fair transaction. Traders could operate in these APMCs only after getting a licence, which ensured government control on them and thus assured price to farmers for their produce. Farmers say that the present system under APMCs has worked for wheat and paddy in Punjab. “But look at what happens to other crops like maize and cotton, which in spite of being under MSP, do not fetch an assured price because there is no guarantee of the government buying these crops. Farmer will sow a crop after he knows the MSP. People in Punjab took to maize, thinking they would get MSP of Rs 1,850 per quintal. But it is now selling at Rs 800-1,000 per quintal. If the government purchase was to stop for wheat and paddy — as seems to be the intent behind the corporatisation of agriculture — wheat and paddy farmers would meet the same fate as that of maize growers,” says Baljinder Singh, who is staging a protest at Dagru village in Moga.

“Certain levies (about 8.5 percent) are imposed on buyers (in Punjab’s case, Food Corporation of India), which were meant for creating infrastructure within mandis and for infrastructure development in villages, mainly a strong network of roads. The Centre does not want to give this money to Punjab, so it is trying to withdraw from government purchase, and bring corporates into foodgrain procurement,” says Harbans Singh Rosha, president, Arhtiya Association, Khanna.

Last year, Rs 4,000 crore was collected as market fee and rural development fund. This was used for strengthening the infrastructure in mandis and for the upkeep and maintenance of 71,000 km of the rural road network.

A sum of Rs 65,000 crore per annum goes into the pockets of farmers from the sale of wheat and paddy in the APMC. “Initially, the private mandis will lure farmers by giving them Rs 80-100 per quintal higher than the MSP. But it is clear that the MSP regime will be abolished soon, and farmers will be left at the mercy of corporates,” says Balbir Singh Rajewal, president of the Bhartiya Kisan Union (Rajewal).