The Himalayas are the youngest in the world and growing, making the mountain range unstable. Unmindful development, ignoring local wisdom and environmental concerns, is fraught with danger, as Chamoli disaster has shown yet again. Travel writers Hugh and Colleen Gantzer, who call Uttarakhand home, call out the flawed development model 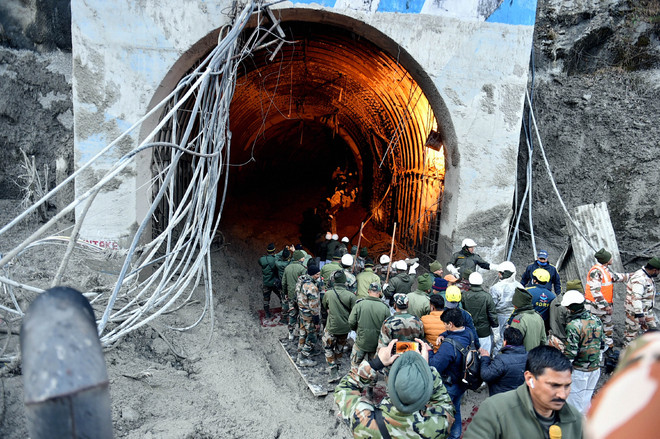 The Himalayas are the youngest in the world and growing, making the mountain range unstable. Unmindful development, without keeping the environmental aspects in mind, can be dangerous, as the Chamoli disaster has proved. Travel writers Hugh and Colleen Gantzer, who call Uttarakhand home, call out the ‘flawed’ development model

These are our Hills of Home. Five generations of our family have lived in this cottage in the oak woods of Mussoorie. This is where we return after we have spanned the globe. This is our stability, our security, our refuge. But, last Sunday, just a snow-goose flight away, the Hills of Home snarled, and growled, and struck back. Innocent people lost their lives in swirling torrents of slush. Others withered away, slowly, painfully, in stygian gloom and bone-crushing cold. For many of the people of Garhwal, the Hills of Home became the Hills of the Homeless. In the silence of our home, we sit sad and pensive. We share the anguish of Alan Paton and ‘Cry, the Beloved Country’, not for South Africa as Paton did, but for Uttarakhand and our awesome Himalayas.

The Himalayas are the greatest mountain range in the world, but they are also the youngest. They are massive, towering, infants growing at the rate that a human fingernail does in a year. A fingernail is very small. Try and imagine a fingernail the size of the Himalayas and the force needed to make it grow! This titanic power is provided by the continental plate on which India rests, its forward edge thrusting like the blade of a monstrous bulldozer under the Eurasian plate: slowly, implacably. It raised the bed of the ancient Tethys Sea to create the Himalayas. The white limestone of our mountains is made of the shells of billions of prehistoric sea creatures which lived and died in the Tethys. On a trek in these mountains, we picked up something which our guide said was a Sudarshan Chakra. It was an ammonite: a fossilised shell of a prehistoric creature related to our present-day cuttlefish!

It was those fossils, that limestone that nearly wiped out Mussoorie. Quarriers had discovered that the Mussoorie Range was made of the purest limestone known in India. It would make the most superb cement. It even had some very valuable, but rather secretive, defence uses. So these great business houses suggested that all citizens of Mussoorie should be evacuated to other places so that they, the quarriers, could excavate all this valuable mineral!

This sounds an unlikely tale, but it is absolutely true. It was then that our late mother, Maisie Gantzer, and two other ladies — Princess Sita of Kapurthala and Mai Badhwar, the daughter of an ICS officer — decided to do something about it. All three were senior citizens, two were widows, the third unmarried. They were inexperienced in such civic agitations but they were very sincere, and very determined. The people of Mussoorie rallied around them.

To cut a long story short, the Supreme Court intervened, the quarriers were ousted, and the apex court set up a high-powered monitoring committee to oversee all environmental matters in Mussoorie and the Doon valley.

This, we believe, is one of the earliest references to the environment by the Supreme Court. People, particularly those of us who live in the Himalayas, began to realise how fragile our snow-covered mountains were. That was the first time it was brought home to us that on the massive, growing, unstable base of the Himalayas rested the world’s largest mass of ice and snow, after the Arctic and Antarctic Polar regions. This is why geologists have begun calling the Himalayas The Third Pole. This great weight of snow and ice is bound up in vast frozen rivers: the glaciers. They move slower than sluggish snails and their melting ice creates many of our mighty rivers, including our sacred Ganga, Yamuna, Brahmaputra and even our Saraswati. On a trek beyond Badrinath, local people showed us a waterfall gushing out of the mountains. They claimed that it was the source of the Saraswati. This impressive cascading torrent has not been developed as a tourist/religious destination.

This neglect is curious. Tourism is often considered to be the basic business activity of Uttarakhand. It, consequently, has attracted the most astute of commercial interests as well as the most shadowy. It is a fact that widening the bridle path that serves the Saraswati waterfall would call for a great amount of engineering skill. It would not, however, need the massive inputs of men, machinery and material that a tunnel would. Contracts to bore tunnels into our fragile, tremor-prone mountains become a far more attractive proposition for many reasons which may, or may not, occur to our well-meaning politicians. Clearly, however, the larger the account, the more the scope for padding. When the ‘developer’ has to provision for working in high altitudes in winter, projected costs are bound to soar!

Here, however, ambitious contractors run into a hazard. Repeated studies of our Himalayas have shown that our mountains are getting warmer. Wild plants are blossoming and fruiting many months before their usual time. More significantly, glaciers are melting earlier.

Environmentalists claim that this is because of climate change. They say that we are releasing more greenhouse gases into the atmosphere than our forests can absorb and recycle. The strange thing, however, is that the Uttarakhand government seems very eager to deplete out forest cover for various reasons. “Security” is one of them though it is significant that no reliable authority has been quoted to support their claim! The old scapegoat of tourism can no longer be burdened with this because one of our government’s proposals would deplete the habitat of wild elephants. That would deter tourists!

This, then, begs the question, does tourism development call for erecting more and still more concrete and metal monstrosities? Do we need the sort of over-building that has blighted Mussoorie, to attract more tourists? Not so, say tourism specialists. In fact, the pandemic, coupled with the growth of digital mass communication, has hit MICE: Meetings, Incentives, Conventions and Exhibitions. In this Covid-19 age, tourists tend to avoid such mass gatherings. People confined to their flats, because of the lockdown, increasingly opt for the great outdoors, experiencing the wide open spaces in small, intimate groups. Uttarakhand has plenty of these. Road tourism is what our state should concentrate on.

But, double-lane, concrete roads are not the answer, especially not if the state is promoting its faraway places. Upgrade Dak Bungalows, PWD Rest Houses, Circuit Houses and Forest Houses. Offer cheap and easy-to-read guide maps also listing local fairs, festivals, places of interest and handcrafts. Then leave it to market forces on what to develop. Local politicians can always find the funds to promote whatever will benefit them. Let them do it. Highway facilities will grow if the traffic grows, and the traffic will grow if the local people are interested, provided the state builds roads to the remotest areas.

Uttarakhand has two major remote-area problems: migration and border infiltration. If the enormous budgets earmarked for hydel projects are diverted to establishing motor-roads to these so-called ‘ghost villages’, there is likely to be a reverse migration. These returning villagers, bringing back their urban skills, will put their homestays, Garhwali cuisine and handicrafts on the tourism map. In the Lake District, in England, we stayed in a very exclusive hotel. It had once been a mill and now specialised in local cuisine, including porridge slow-boiled overnight. Here, at home, we relished an excellent Garhwali soup made out of stinging nettle, with a swirl of cream.

If mountain getaways, cuisine and culture can re-populate ‘ghost villages’, the security of our borders will be strengthened.

This brings us back to where we began. If the Uttarakhand government does not dig tunnels and build dams for hydel projects, how will it cater to the power needs of its tourism industry? Simple: follow Mussoorie’s example.

Back in the first decade of the 20th century, the Mussoorie City Board created its own hydro-electric power plant. It tapped the water of two mountain streams and diverted them into large sedimentation tanks to allow suspended particles to settle. Then, in metal pipes of decreasing diameter, it drew this water down a steep slope till it gushed out in powerful finger-width jets in the Galogi Power House. There were no dams, no tunnels, no toxic fumes, no waste products and no consumption of water because, after powering the generators, the water flowed back into the streambeds to irrigate downstream farms and villages. The only unusual maintenance it required was the cleaning out of lime encrusting the pipes about once in 18 months. This scheme, reputedly, made the Mussoorie municipality the richest in India. Then, the hydel plant passed into the fell hands of the state government. But Galogi still manages to limp along after more than a century of service.

Why can’t we have a large number of similar, run-of-the-river, systems controlled by local civic bodies? In fact, our decision-makers must realise that that voters have begun to suspect that all grandiose projects are inherently dangerous, and likely to be motivated by suspicious intentions! If you trust the voters to elect you, you must trust them to decide to accept or reject your schemes. Don’t decide for them, decide with them!

Finally, Uttarakhand has a number of glaciers: our only source of water. They fill our rivers, re-charge our springs and are replenished whenever water, carried aloft from the oceans, falls as snow on the world’s highest abodes of snow, the Himalayas. If these torrents of heaven are not caught in the tangled locks of the forests of the great mountains, they will wreak havoc on the earth, and all its inhabitants, beneath.

That is what happened on a terrible Sunday, just a snow-goose flight away, in our beautiful Hills of Home.