All is not well with the country’s civil aviation sector, what with a string of maintenance-related glitches, disgruntled staff and more 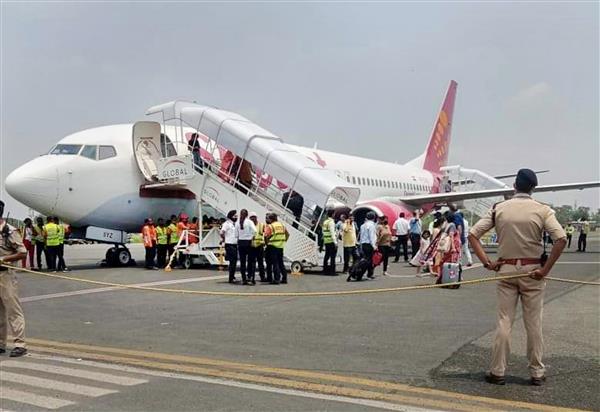 Passengers come out of a Delhi-bound SpiceJet airplane in Patna following an emergency landing after it caught fire mid-air. PTI

‘It was the best of times, it was the worst of times’ may well describe the state of the Indian civil aviation industry today. While there is excitement at the entry of new players like Air Akasa and re-entry of Jet Airways, with a privatised Air India taking to the skies, a string of maintenance-related glitches, mass leave by crew and pilots, protest calls by technicians and the Directorate General of Civil Aviation (DGCA) flagging safety issues point to trouble brewing in this sector.

Scare, up in the skies

July 17: IndiGo’s Sharjah-Hyderabad flight diverted to Karachi after pilots observed defect in one of the engines.

July 15: A bird found in cockpit of the AI Express’ Bahrain-Kochi flight.

Low-cost carrier SpiceJet, which announced 26 more domestic flights from July 22, has been in the eye of a storm with as many as nine incidents related to engineering and maintenance issues since May 1. These include malfunctioning fuel light indicator, faulty weather radar, windshield crack, smoke in cabin, engine catching fire mid-air and low cabin pressure. Meanwhile, two Go First flights were grounded after a fault mid-air while another flight was diverted after its windshield developed a crack. An IndiGo flight from Sharjah was diverted for a precautionary landing at Karachi after a snag, while an Air India Express Boeing that took off from Calicut for Dubai had to be diverted to Muscat after a burning smell was observed in the cabin. The latest in the string of incidents is the cabin depressurisation in the Air India Dubai-Kochi flight, which led to nosebleeds among some passengers.

An aviation expert says these issues are not airline-specific but are indicative of a pattern which calls for introspection before it is too late. In its order dated July 18, the three reasons for recent airline snags and diversions that the DGCA indicated after spot checks included improper identification of cause of a reported defect, increasing trend of MEL (minimum equipment list) releases and non-availability of the required certifying staff to cater to multiple scheduled arrivals and departures. (A minimum equipment list or MEL, formulated by the aircraft manufacturer, allows an aircraft to be flown with certain inoperative items under prescribed conditions.)

The DGCA has set a deadline of July 28 for the airlines to fix the glitches.

So, is the safety of passengers being compromised? “No,” claims a senior pilot of SpiceJet, not wishing to be named. “There is nothing wrong with releasing an aircraft on MEL which has been cleared by the DGCA. No pilot would fly a plane if it is unsafe. Once in the air, the only option in case a technical issue arises is to safely divert and land the plane to prevent any untoward incident. Incidents like these keep happening day in and day out. Only now it is coming out in the open, thanks to social media.”

Another senior aviation expert agrees that though earlier hardly any plane would fly on an MEL, post-Covid this is becoming a norm due to the increased number of flights, besides the high pressure of on time performance (OTP), which is putting off the maintenance work till the last.

For an airline, a plane on ground makes no money. A lot of money goes into paying various charges like air navigation service and services such as landing, parking and housing charges, besides passenger service fee, user development fee, etc. Most of the airlines have reduced the turnaround time, which is 25-30 minutes for smaller airlines and 40 for the larger ones. This is the time starting from opening the doors of the plane after touchdown till the next boarding. A lot is packed in this time: from deboarding to unloading the luggage to sanitising the seats and seat trays, cleaning the toilets, loading the luggage, catering, etc. Meanwhile, the pilot is readying the plane for the next flight by checking it for its fuel, tyres and other machinery requirements, and sharing those notes with the engineer on duty.

“All this is managed minute by minute and any delay gets logged in and an explanation is sought. Though one goes by the book, but when you know your performance will be assessed for each extra minute you take to examine the plane, one does end up taking shortcuts sometimes. Often maintenance issues are left for later, if the rules permit flying,” says a pilot, not wishing to be identified.

Aviation professional Capt Shakti Lumba compares this to the long Covid that the sector is still reeling under. “The government is not doing anything to help this industry. There is a need to restructure the regulator of the civil aviation sector,” he says.

The nationwide lockdown due to Covid-19 saw airlines suffering an estimated loss of Rs 19,564 crore in 2020-21. In their desperation to recover the losses as well as the rising aviation turbine fuel prices following the Ukraine war, the airlines are cutting down on salaries, putting off getting spare parts or handling maintenance issues. Many an airline carrier is even resorting to ‘robbing’, wherein equipment from another aircraft is being used to tide over the present crisis, thus helping it buy more time to get a spare part later — a not so healthy practice for aircraft safety.

It is, however, not just maintenance issues that are rocking the commercial aviation sector. On July 2, the crew staff of IndiGo reported sick en masse. Interestingly, Air India had its walk-in interviews that day. This affected 55 per cent of the flights of IndiGo, which operates around 1,600 domestic and international flights on a day-to-day basis and holds 57 per cent of the domestic passenger share. Another call for protest against poor salaries was given by its technical staff. In a similar move, technicians of Go First took leave of absence, protesting over low salaries at its maintenance hubs.

Another issue the industry is facing is that of exploitation of the Flight Duty Time Limitations (FDTL) by the airlines. Most of the pilots are doing four sectors in a day, approximately working 10-11 hours in the cockpit, with little or no break. The issue of pilot fatigue is too serious to be ignored. In the Air India Express crash at Mangalore airport in May 2010, which left 158 persons dead, an error in judgment on touchdown was attributed to pilot fatigue because of two consecutive nights of flying.

This is not all. All over the world, there is a three-month notice period a pilot can give to leave a company. Since 2018, however, the rule has been amended by the DGCA citing public interest. “It is now mandatory for pilots to give an advance notice period of one year to leave an airline, while it can chuck us in a day. It is as if we are bonded labourers,” says a disheartened pilot, adding that the minute anyone speaks openly about the issues, harassment begins. “One has to spend Rs 1crore-Rs 1.25 crore to become a pilot but the present salaries are not commensurate with the amount we invested,” he adds.

“Downright exploitation of employees is taking place in the civil aviation industry,” says Capt Lumba, adding that “the absence of unions and stringent one-sided bonds make it tough for the employees to speak up about any kind of exploitative practices”. A coherent policy protecting the interests of the employees, airlines as well as passengers is required, he opines.

One cannot ignore here the Swiss cheese model of airplane accident investigation. It views human error as a symptom of a larger problem within the organisation. Multiple barriers are required to be in place to prevent any adverse event. Are the recent maintenance-related incidents or cases of employee dissatisfaction an indication that things need to change for the better in the third largest domestic aviation industry in the world, or are we waiting for a disaster to happen?