Undivided Kitchens: Refugees brought back techniques and dishes left behind during Partition : The Tribune India

Undivided Kitchens: Refugees brought back techniques and dishes left behind during Partition 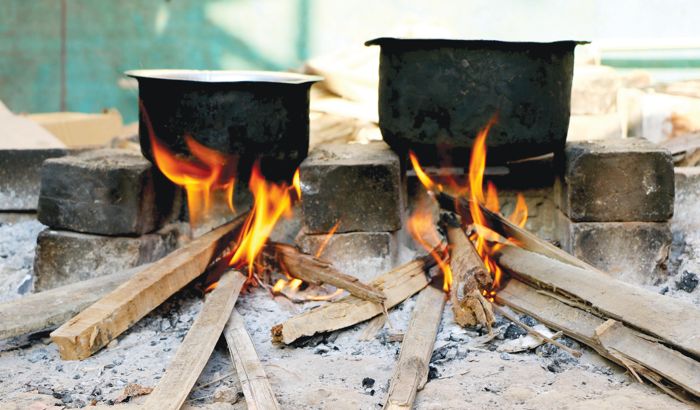 As heartbreaking memories of Partition began fading a little, refugees went back to techniques and dishes of the land they had left behind. istock

As we commemorate the 75th anniversary of our Independence, there is more than a whiff of nostalgia in the air. Memories of the freedom struggle and selfless sacrifices of freedom fighters have been rekindled, as also of life lived in undivided India. There was a time when the subcontinent was not partitioned and the political map displayed one, not three countries.

Partition was an unmitigated tragedy that brought in its wake a bloody trail. The painful scars continue to rankle. However, even the unprecedented carnage couldn’t destroy the shared heritage of the people forcibly torn asunder. Nowhere is this more visible than in the realm of food. What was cooked in the kitchens of undivided India continues to dominate the subcontinental imagination.

Initially, many dhabas labelled their fare with a geographical tag — Peshawari, Pindi and Amritsari. But by the mid-1960s, the food had become homogenised, a blend that appealed to the locals — Butter Chicken, Daal makhni, Shahi paneer, Kadahi murg...

The first generation of Punjabi refugee eateries were named almost generically: Sher-e-Punjab, Sardar Hotel, Kake da Dhaba and all of them served no-frills, value-for-money meals — rogan josh, chicken curry, tandoori chicken with tandoori roti. Naan came much later. With the passage of time, keema-kaleji and magaz were added. As the humble dhaba became gentrified, seekh kebab, chaampe tikke, rarha gosht, saag meat, nalli gosht made their appearance. Some outlets like Moti Mahal carved out a niche for their Peshawari cuisine-influence food and ambience.

As things settled down, some enterprising dhaba owners chose to label their fare with a geographical tag — Peshawari, Pindi and Amritsari. It took a little more than a decade for heartbreaking memories to begin fading a bit and signages prominently proclaimed places left behind, or the association with Khyber, Kandahar or Frontier. Not in all cases was the food dished out rooted in a particular region. By the mid-1960s, the fare had become more or less homogenised. The quality varied but the taste had become hybrid. It was now more of a blend that appealed to the local clientele — butter chicken and daal makhni, shahi paneer and kadahi murg, mutton masala.

The next generation of ethnic Punjabi restaurants claimed the legacy of ‘United Punjab’ and were named accordingly: The Punjab Grill, Punjabi by Nature, Singh Saheb, Made in Punjab, and even Pind Baluchi cast its net wider beyond the village in Balochistan. The post-liberalisation generation was driven by the desire to search for its roots and this led to the revival of culinary explorations, foraging for family heirloom recipes, both vegetarian and non-vegetarian.

Chef Jiggs Kalra played a pioneering role in introducing the best of Punjabi cooking to discerning diners in India and abroad. Zorawar, his son and successor, is carrying forward Kalra’s legacy in a trailblazing manner. The contested borders of the subcontinent become blurred the moment you step on foreign soil. Ties of language and ethnicity break the sectarian fetters. In London or New York, cooks and serving staff, and even diners, from India, Pakistan and Bangladesh own up their subcontinental identity and feel equally at home in each other’s eateries.

It is in such ‘homes away from home’ that the world has fallen under the spell of Balti cuisine. Baltistan, a part of Pakistan-occupied Kashmir in Gilgit, has robust rustic fare served in cooking vessels shaped like a bucket, carved of stone. The local name of this mouth-watering recipe is ghorqun. Minimalist spicing allows the natural flavours to shine. Balti people are similar to the Sherpas of Nepal who work as load-bearers. However, unlike Sherpas, they don’t climb up with mountaineers. Rohh is a popular dish that has just three ingredients: mutton, fat and salt. Nowadays, a few chopped green chillies may be sprinkled on top. It is served with daal, a little butter and khambir roti (fermented Ladakhi flat bread).

Another thing worth taking note of is that Sindh also did not remain untouched by Partition. Sindhis may be a microscopic minority, but the community is intrepid and dynamic. Largely active in trade and commerce, they have left their imprint wherever they have settled. Bombay was considered the twin city of Karachi and it’s not surprising that most Hindu-Nanakpanthi Sindhis made it their home. Some came to Delhi. It was not only the Sindhi/Bombay/Karachi halwa that was associated with them. Sindhi kadhi, Sindhi biryani, Sindhi seyal gosht and special breads also set the cuisine of this community apart. These dishes, however, remain to be discovered by many Indians.

Tandoor — the legendary clay oven, aka chulha or sanjha chulha — also spread across the length and breadth of the land along with the refugees from Punjab, who scattered to strike new roots in different provinces and engaged in myriad trades. It isn’t only the tandoori murgh and assorted tikka that travelled with the displaced persons, but mah di daal, paneer and chhole-bhature, too, established a pan-India presence. Today, one can savour these at fine-dining restaurants in deluxe hotels as well as roadside dhabas from Ladakh to Kanyakumari.

The impact on Bengal

The upheaval of Partition was no less painful and traumatic in the East. The province of Bengal had barely pulled itself out of the horrors of famine that it found itself thrown into the madness of manmade turbulence. The refugees from East Pakistan did not disperse all over India in 1947 — the affected families largely remained concentrated in West Bengal and Assam and to a lesser extent in Delhi. Bengal had witnessed division almost four-and-a-half decades earlier too, when Lord Curzon, in his imperial hubris, separated the eastern and western parts of Bengal, drawing new boundary lines and shrinking its footprint in Orissa and Bihar. This decision had provided the spark to ignite violent protests, resulting in nullifying that partition soon.

In Bengal, historically, two parallel culinary streams have co-existed — the Ghoti (from west) and the Bangal (from east) — with remarkably different flavours, preference for ingredients and variations in cooking style. The famine during the wartime and Partition in the wake of Independence created pressure cooker-like conditions in Bengal where foods intermingled.

The liberation of Bangladesh in 1971 was a dramatic unravelling of Partition — at least in the East — that brought millions of Bangladeshi sharnarthis, running from the genocidal Pakistani army deployed in East Pakistan. Many went back, but thousands stayed put. This time, many displaced families moved beyond Bengal and Assam. The perception of Bengalis and their food changed with this new wave of migrants. It was not only delicate chhena sweets or maach cooked as jhaal or jhol that were associated with the immigrants. Everyday staples like daal, bhaat, chorchori, saag, ghuguni, aloo chop, jhaal muri made their appearance in Bengali colonies like Chittaranjan Park in southeast Delhi. Earlier it was labelled as East Pakistan Displaced Persons’ Colony. Over the years, there has been growing appreciation among the non-Bengalis of kasundhi, nolin gurer molasses, different kinds of fish and cheaper shrimps. Dhokar dalna (fried chana daal cakes), dolma (stuffed grape leaves) have claimed their rightful place in the sun along with aloo dum, cholar (chana) daal.

Even the naive newly-initiated foodie today realises that Kolkata is not the source of all Bengali delicacies. Dhaka has more interesting variations of polav, biryani and porota. Chittagong, a historic port city that has hosted ships from Southeast Asia for centuries and was once home to a flourishing Firangi Bazaar, is renowned for its very distinct kalo bhuno buff or mutton roast.

There is fascinating regional variation in Bangladeshi recipes. Bangladeshi cities Jessore, Mymensingh and Rajshahi take pride in their distinct gastronomic heritage. Before the British rule ended, Bengal had close commercial ties with Burma. Bengalis comprised a large segment of the Indian diaspora in Yangon (formerly Rangoon) and Mandalay. The use of coconut milk in malai curries from Bengal bears testimony to this influence. Partition interrupted this interaction. It’s a matter of some satisfaction that some of these forgotten flavours are now being revived by chefs and home cooks who have never accepted the Radcliffe or Durand Lines in the kitchen.

It is heartening to note that many amateur and professional cooks are giving new life to classics like encholer kaliya, bhorta and are regularly organising hilsa festivals. Babo’s Home Kitchen in Delhi, other restaurants across India like Bijoli Grill, Babumoshai, Oh! Calcutta, 6 Ballygunge Place, Aminia, all have contributed to our appreciation of the resplendent diversity of the ‘Undivided Kitchens of India’.

May the love for food conquer all!