Given the current level of farming technology and practices, promoting horticulture, oilseeds and pulses, for which the agro-climatic conditions of Punjab are suitable, is a viable alternative. These are not only less water-intensive but also essential for meeting the increasing requirements of nutritional security. At the same time, the increased local production of these crops would save considerable outflow of foreign exchange needed for importing them. 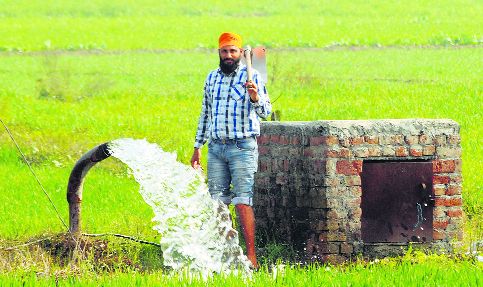 The end of the halcyon days of the wheat-paddy regime is looming large, leaving farmers unsure whether agriculture can sustain their livelihood in future. File photo

THE seeds of the ongoing farmers’ agitation against the farm laws were, ironically, sown with the advent of the Green Revolution in Punjab, and subsequently in Haryana and Western UP, in the 1960s and 1970s. The wheat-paddy crop rotation assiduously promoted by the Central and state governments through robust institutional support, public-funded R&D in high-yielding varieties of seeds, assured irrigation and subsidised fertilisers, ably backed by field-level extension services and the initiative of Punjabi farmers made the Green Revolution a great success, paving the way for ensuring the food security of the country. The Minimum Support Price (MSP) regime and the procurement policy of the government, together with free electricity, sustained the boom and Punjab was rightly hailed as the ‘Bread Basket of India’.

Regrettably, the consequences of the Green Revolution have been a mixed bag for the state and its economy. The highly water-intensive paddy crop was not indigenous to Punjab and its widespread cultivation necessitated intense exploitation of groundwater sources. Flood irrigation and application of chemical fertilisers incentivised by government policies aimed at enhancing production severely damaged soil and its fertility over the years. With higher and higher exploitation of groundwater, the water table in the paddy-growing areas of the state has gone down alarmingly. On account of the fear of the wrath of the farmers’ organisations and competitive vote-bank politics, successive state governments have found it impossible to do away with free power for agriculture that costs the exchequer over Rs 6,200 crore annually, crippling the finances of the state. Over the years, the productivity of wheat and paddy flattened and resulted in stagnating income for the farmers in spite of the MSP. The end of the halcyon days of the wheat-paddy crop regime is looming large, leaving farmers unsure whether agriculture can sustain their livelihood in future.

No bolt from the blue

The current crisis in agriculture is not a bolt from the blue. As early as the 1980s, serious doubts about the viability of the wheat-paddy cropping pattern had surfaced, evident from the constitution of the Johl Committees (I and II) in 1986 and 2002. The Johl Committees realised the unsustainability of the wheat-paddy cropping pattern and recommended a series of measures for restructuring and diversifying agriculture, the most significant of which was shifting 20 per cent of the area under agriculture to non-paddy crops. The committees also emphasised that commitment of the Central and state governments in terms of technological, institutional and assured price support for alternative crops was critical for achieving the desired objective. As later events proved, neither the Central nor the state governments nor the farmers realised fully the seriousness and urgency of the simmering crisis and ‘business as usual’ was allowed to continue with sporadic annual debates about the quantum of MSP without addressing the core issues arising out of overexploitation of water, declining productivity of soil and the increasing cost of production and diminishing returns.

The three laws which have earned the wrath of the farming community, especially in the Punjab-Haryana-Western UP belt, are a serious attempt at reforming the agriculture sector, which was long overdue, and open it up for free market forces. But it has misfired for many reasons. The laws do not address the main concerns of the farmers: to be assured of remunerative returns for their crops. The Centre’s unwillingness to give statutory protection to MSP is the critical stumbling block in the way of resolving the ongoing agitation.

Prolonging the stir indefinitely is neither in the interests of the farmers nor of the country at large. Given the assurances of the government about the continuance of MSP and its decision to keep the farm laws in abeyance, it should be possible to evolve a modus vivendi to end the impasse and carry forward the much-needed reforms agenda through a transparent consultative process. Doubling farmers’ income within a given time frame and operationalising the statutory MSP for all 23 crops which are covered under the MSP regime through appropriate procurement mechanisms of the Central and state governments and the private trade should be the twin pillars of an overarching Central legislation which should provide for state-specific enactment to suit local conditions and requirements, especially as agriculture is on the State list and marketing of agri-produce on the Concurrent list.

That continuation of MSP in its current form is not a panacea for rejuvenating agriculture and promoting the interests of farmers is beyond doubt. Perpetuating the operation of the MSP regime for wheat and paddy is not only unsustainable but also disastrous, especially for Punjab, its farmers and its agrarian economy. Punjab would turn into a desert at the current rate of exploitation of groundwater. Farmers must realise the ground reality and the state and Central governments must help them move out of the vicious cycle of wheat-paddy cropping.

Given the current level of farming technology and practices, promoting horticulture, oilseeds and pulses, for which the agro-climatic conditions of Punjab are suitable, is a viable alternative. These are not only less water-intensive but also essential for meeting the increasing requirements of nutritional security. At the same time, the increased local production of these crops would save considerable outflow of foreign exchange needed for importing them. Central and state governments should commit themselves to providing the required infrastructure, R&D support and institutional mechanisms, including market intervention, for the operationalisation of MSP for sufficiently incentivising the farmers to opt for the new cropping pattern.

As its farmers have been the worst-hit on account of unsustainable wheat-paddy crop rotation and the ongoing agitation, Punjab could consider taking the lead in facilitating the process.

Nair is a former Chief Secy of Punjab; Ghuman is Professor of Economics, CRRID, Chandigarh