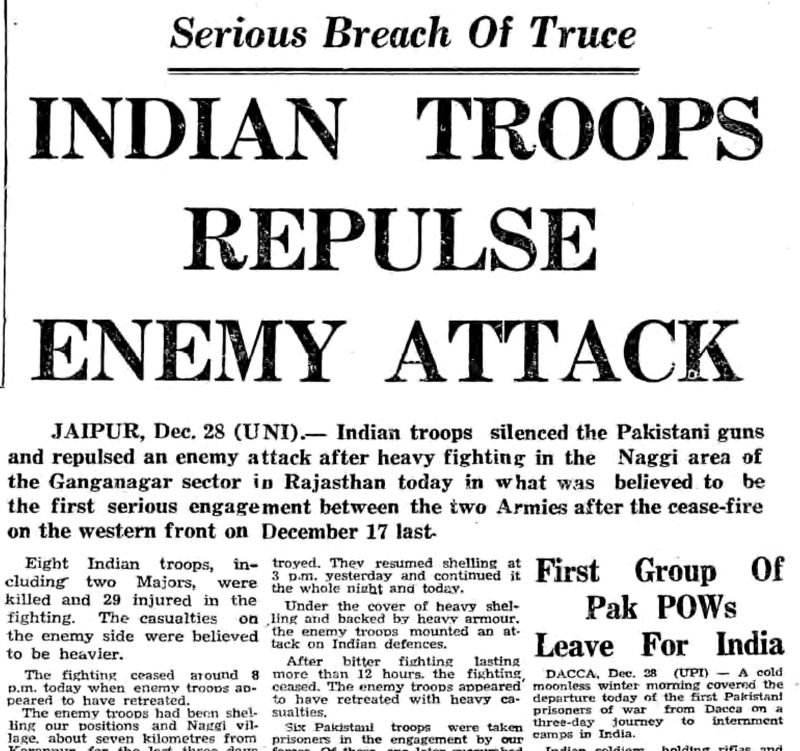 Ending a war is always a bloody mess. That is true of the drawdown of the ‘forever war’ that the world is witnessing in Afghanistan today, as it was true of the two-week hostilities between India and Pakistan 50 years ago.

Even if India had a decisive surrender from the Pakistan Eastern Command in Dhaka on December 16 and an acceptance of a ceasefire on the western front on December 17, there were bloody fights that took a heavy toll in lives beyond those dates.

Just as armed conflicts between India and Pakistan had broken out before the formal declaration of hostilities on December 3 that year, they continued after the formal cessation of the war.

One of the bitterest in that order was in Rajasthan’s Ganganagar sector. Nearly 10 days after the ceasefire was accepted, Pakistan’s army made an intrusion to set up a defended position atop two sand dunes over what was basically wasteland of little or no strategic value. The firefights that followed came to be known as the “Battle of the Sadiqia Sand Dunes” or the “Battle of Naggi”.

Later chroniclers have pointed out that Pakistan’s President Yahya Khan had described the fall of Dhaka and the signing of the instrument of surrender by his Eastern Command chief Lt Gen AAK Niazi as merely a loss of a battle, while the war would go on (reference: Major KC Praval’s excerpt in the Indian Defence Review, ‘Indian Army after Independence’). It was surmised that Pakistan wanted to claim victory or stalemate in the west while its forces had collapsed in the east. Within 24 hours of that statement, better sense prevailed and he accepted the ceasefire.

At the Sadiqia dunes, however, Indian troops discovered on December 25 the incursion by a company of Pakistan’s 36 Frontier Force and Rangers. It was supported by heavy artillery. They had also laid minefields to stop an Indian advance.

Major Vijay Kumar Berry, then leading Charlie Company of the 4 Paras, was asked to secure the area. He was backed up by the 9 Para Field Regiment of Artillery and the 410 Field Company of Engineers. Clearing the minefields while being subjected to shelling was done by the Engineers.

Just a week earlier at Basantar, further north of Berry’s position, Major Vijay Rattan Chowdhary of the 405 Field Company of the 9 Engineers Regiment had demonstrated what it takes.

“Major VR Chowdhary was in charge of minefield clearance of Chakra on the western front. The safe lanes had to be made with great speed to enable our tanks and anti-tank weapons to reach Chakra, which was in imminent danger of a counterattack by enemy armour. With utter disregard for his personal safety, Maj Chowdhary personally supervised the operation, inspiring and motivating his men to their optimum efficiency. Throughout the advance, from December 5 onwards, Maj Chowdhary displayed exemplary devotion to duty and was responsible for clearance of minefields of 1,000-1,500 yards depth at Thakurdwara, Lohra and Basantar river. While supervising the minefield lane near Basantar river, this gallant officer was killed due to enemy artillery fire. Maj Chowdhary’s exceptional devotion to duty, extraordinary bravery, inspiring leadership and supreme sacrifice was in the highest traditions of the Army,” reads his MVC citation.

In the desert, accounts of the battle state how dust and sand raised by the artillery had made visibility difficult, to the extent that the men could barely see who was leading. Pakistan’s heavy guns took a heavy toll. Major Praval estimated that 9 Para lost 21 men, including three officers, and 60 were wounded. Pakistan had employed more than 70 artillery pieces before the Indians re-took the position at great cost on December 28.

“After the ceasefire on December 17, 1971, Pakistani troops occupied an area of approximately 600 yards inside our territory in the western sector and developed this into a defended locality with minefields all around it. The locality was dominated by other defensive positions across the border held in strength by the enemy. A battalion of the Parachute Regiment was given the task of clearing this encroachment. Major Vijay Kumar Berry carried out the assault. Leading his men through the minefield, he charged at the enemy position without any regard for his personal safety and captured the objective. The enemy, however, subjected the position to heavy artillery and mortar fire for the next twelve hours. Undaunted, Maj Berry moved from section to section, inspiring his men and held on to the captured ground and cleared the intrusion.”

An idea of what transpired in the battle is available from the experience of Capt Shankar Rao Shankhapan Walkar. A mortar officer with 18 Madras, his detachment had advanced as much as 42 miles towards Hingore Tar.

This was also on December 16 when Niazi was surrendering his service revolver in Dhaka. Walkar was hit by splinters from shells as he ran between his mortar positions that tore him down.

“With utter disregard for his personal safety, Captain Walkar went to each company position to tie up defensive fire tasks. In doing so, he was hit twice by splinters and sustained injuries, but he refused to be evacuated and carried on with his task, displaying outstanding courage and devotion to duty. Heavy enemy shelling continued during the night and early next morning, the enemy assaulted two company positions. Although wounded, Capt Shankar Rao Shankhapan Walkar stuck to his job and brought very accurate mortar fire on the enemy and inflicted heavy casualties.”

Captain Walkar succumbed to his injuries.

Two days before that as India and Pakistan played out a stalemate in the Chhamb and Shakargarh areas, Capt Pradip Kumar Gour, who was an air observation officer giving vital intelligence on artillery and armour positions, was shot down by Pakistan Sabre jets. He was obstinate in continuing with his mission despite spotting danger.

“Captain Pradip Kumar Gour was a pilot with an air observation post squadron deployed on the western front. Throughout the operations, he flew round-the-clock missions deep inside enemy territory, directing artillery fire and obtaining vital information about the enemy, undeterred by heavy small arms and artillery air burst fire. On December 14, 1971, while locating and registering targets deep inside enemy territory, Capt Gour saw three enemy Sabre jets operating in the area. Instead of returning to the base and avoiding the danger, he decided to continue with the mission in view of its vital nature. He carried on with his mission evading the Sabre jets. Eventually, he was shot down.”

In later remarks, the French General Andre Beaufre, who was invited by Manekshaw to visit India after having spent time in Pakistan during the war, said that both sides in the western front had fought defensive battles. Also, the claims made by Pakistan did not match his own visual experience in inflicting the kind of damage it said it had on Indian troops. On the Indian side, he said, there was an unwillingness to push the advantage and take the battle to enemy territory. But that conclusion does not necessarily mean the Indians were wrong. It was part of the operational plan to go for the jugular in the east while holding ground in the west. Even that was terribly costly as the battle of the sand dunes shows.