When all flats are declared unsafe: Residents of Gurugram's Chintels Paradiso say won't vacate until duly compensated : The Tribune India 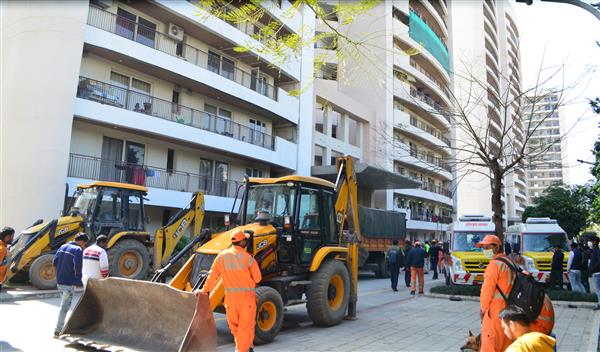 Rescue operation on at Chintels Paradiso after six of its floors collapsed in February. Tribune photos: S Chandan

Nine high-rise towers adorned by vast green spaces, basketball and tennis courts, a swimming pool, clubhouse and ample parking space. Chintels Paradiso in Gurugram offered a dream home to the 300 families that started living there beginning 2017. Ram Krishan Rana (60) was one of the homebuyers. This farmer from Bajghera village in Gurugram district had hoped to spend his retirement years peacefully. He tried to ignore the building’s shaky walls, sagging balconies and exposed iron rods, but his life came crumbling down on February 10 after the ceilings of six floors of Tower D collapsed partially, killing two.

The Chintels builder has been asked to work out a resettlement plan with the residents and clear all dues within 60 days. If both parties cannot reach a consensus, we will step in and work out compensation as per the norms and evaluation. We will safeguard the future of each homebuyer and ensure rehabilitation. Nishant Kumar Yadav, Deputy Commissioner

Onus on officials too

While the builder and repair contractor have been held responsible for the Chintels Paradiso collapse, the residents want action against erring government officials too. The initial FIR registered after the collapse did identify the contractor and structural engineer as accused, but there was no mention of officials of the Department of Town and Country Planning, who had approved the project and given the completion certificate.

Many residential societies in a fix

The Chintels’ crisis has left lakhs of residents of New Gurugram a harried lot. Many societies in this area have been facing construction issues. Residents are concerned that if a well-known developer like the Chintels could not ensure safety, where do houses by small builders stand? Most worried are the residents of Raheja Vedanta in Sector 108; Raheja Atharwa in Sector 109, Brisk Lumbini in Sector 109, M3M Woodshire in Sector 107 and Mahindra Aura in Sector 110-A. These five societies have been cited as most deteriorated since the Chintels’ collapse. An immediate structural audit was announced and IIT-Roorkee was contacted, which couldn’t be brought on board. Though the administration got four independent agencies engaged for the audit, no progress has been made so far. Residents have been running from pillar to post since February.

“My house is on the 18th floor of Tower D. I have been living like a refugee ever since the floors collapsed. We had to move to another tower as a stop-gap arrangement but we never unpacked properly in the hope of going back to our house. Each day, as we passed by the debris, we prayed that the IIT-Delhi committee, which has been conducting a structural audit of the building, would find a solution and we would be able to get back our houses. But, it seems, we have lost everything. I can’t imagine the struggle that lies ahead in getting the adequate compensation, besides going house-searching at my age,” says Rana.

The decision to demolish Tower D was taken after a three-member committee of IIT-Delhi stated, in its September report, that the structure had deteriorated faster than expected, even though the flats had been occupied for only five years. The team found significant corrosion of steel reinforcement in the debris of the tower, besides high chloride content in the concrete. It also observed rust marks during the visual inspection.

A magisterial inquiry report, submitted last week by a committee headed by the Additional Deputy Commissioner, stated that the developer had neglected the demands and issues raised by the Residents Welfare Association (RWA) and homebuyers. “The repair work was not monitored. The committee observed that excessively corroded steel reinforcement had been painted with a yellow-coloured solution to conceal the corrosion. This lapse has been further corroborated by the IIT-Delhi report,” the magisterial report stated. The committee also ordered immediate evacuation of Towers E and F. Meanwhile, the administration has ordered not just the demolition of Tower D and evacuation of Towers E and F, but also upheld the IIT report recommending evacuation of the entire society, owing to corrosion.

“I am a few years from my retirement. I had been saving for my daughter’s wedding but this order has changed my priorities. I need to arrange finances to buy a new house, before thinking of settling my children,” says 55-year-old Bhaskar Parashar, who lives in Tower E.

According to the residents, though Deputy Commissioner Nishant Kumar Yadav has ordered the builder to settle all dues within 60 days, there is no clarity yet regarding compensation and rehabilitation. The Department of Town and Country Planning (DTCP) has asked the builder to plan evacuation by November 15 but the residents are refusing to vacate their flats till they have a compensation plan in hand. “The report says Tower D is beyond repair. All other towers are showing similar deterioration. They are working out demolition and evacuation plans, but what about our future? They need to fairly compensate us first or rehabilitate us. No family will move out till a compensation package is sealed. We don’t want what we paid five years back, pay us the current market value of our flats,” says Rakesh Hooda, president of the RWA, Chintels Paradiso.

The administration has already prepared an evaluation report. Depending on the size of the apartment, the residents will get Rs 1.5-Rs 2 crore if they are willing to sell back to the developer. The residents, however, feel this is not enough. The association claims that the flats were bought for around Rs 6,500 per square foot while flats at nearby projects are selling for Rs 13,500-Rs 14,500 per sq foot.

“If we go for similar flats in nearby societies, we will get possession after four years. If we buy ready-to-move-in flats, these will be very expensive. The builder has ruined our lives and he should pay up to resettle us all. What the government is offering is not enough. We can get our own evaluators and tell them the price. Unless a proper compensation plan is shared with us, we will not leave our homes. We don’t want to end up like the flat owners of NBCC Green View, who are struggling to get refund even after nine months,” Hooda adds. Citing the plight of residents of NBCC Green View, who are running from pillar to post after evacuating their society, the Chintels’ residents are refusing to move till they have money in hand, even though negotiations for resettlement and compensation have already started. The NBCC Green View project was launched in 2010. The construction began in 2012 and homebuyers were given the possession of flats in 2017. It has 784 apartments, of which 260 have been sold. In November last year, the NBCC had issued directions to occupants to vacate the flats as these were deemed ‘unsafe’ in a report submitted by experts from IIT-Delhi. However, the residents refused to vacate the complex as they were seeking compensation, refund and rent in some cases from the developer. In February, after the collapse of floors of Chintel Paradiso, the administration stepped in and got the society vacated in March. They were promised fair compensation — refund with interest. Eight months have gone by, but the residents are yet to get a penny.

The buyers allege that the developer has not complied with the district administration’s order asking NBCC India to refund the amount paid by the allottees towards their flats, along with the applicable interest, as per the law.

Instead, the developer has sent an arbitrary proposal to the allottees offering the amount they paid in 2012 without interest or compensation, they said. “The developer is trying to put pressure on us to accept their one-sided offer,” says Deepak Kumar Jain, treasurer of the Green View Apartment Owners’ Association. G Mohanty, president of the association, says, “We have decided to stage protests, including a hunger strike, if justice isn’t served.”

Their plight has left residents of Chintels scared and adamant on payment before evacuation.

“I poured my entire retirement fund into buying this flat. I have been duped by the builder. We are not moving till the administration and builder give us a secure future. We will take our money first, and then step out,” says Rajendra Vatsa, who moved to the society in November last.

The Gurugram administration has zeroed in on 58 societies and ordered an audit of 17 “having serious construction flaws” in the first phase that started in September. Haryana’s Department of Town and Country Planning (DTCP) has issued work orders to four structural audit agencies that will conduct a detailed survey of 17 residential buildings, both internally and externally, to record construction faults, deterioration level and damage to slabs, columns and beams. The survey will also help find the reason behind the defects. Says District Town Planner (Enforcement) Amit Madholia, “The agencies will suggest remedial measures and make recommendations about the frequency, type and location of other tests that are required to ascertain structural integrity of these buildings.”

Many developers, however, have failed to pay assessment fee or submit structural plans or details for the survey, which was to be completed in 45 days. So, while the reports are awaited, the residents want an answer to what next. “We know that the deterioration is similar to Chintels Paradiso in many societies. What will the administration or the government do? Pull down thousands of homes?” asks Praveen Malik, president of the United Association of New Gurugram. Claiming that the NBCC residents have been left in the lurch and those of Chintels Paradiso are headed the same way, he says, “What if the other societies, too, are unsafe? The authorities need to deal with the developers with an iron hand, rehabilite the homebuyers who have been defrauded, rather than just evacuating and converting them into refugees.”