When Bangladesh became a free country: A Mukti Jodha remembers 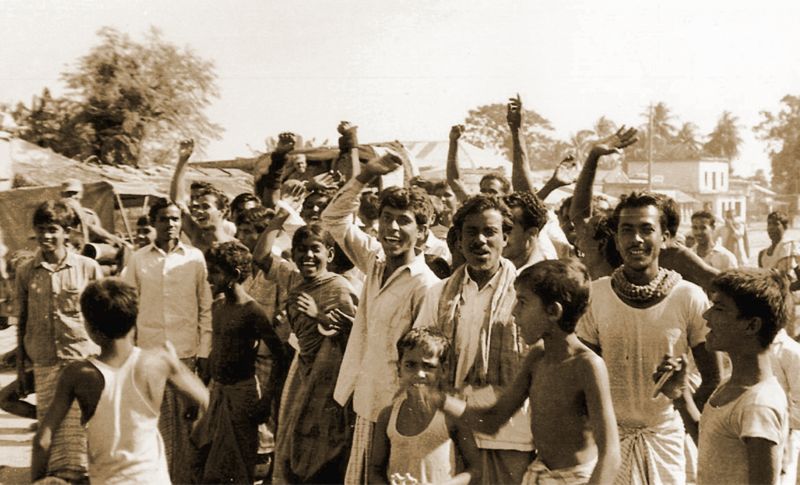 ON the occasion of the 50th anniversary of the birth of Bangladesh and the establishment of its relations with India, it is only fitting to recall that the ties are rooted in irreversible history and conditioned by irrevocable geography. India’s direct role in Bangladesh’s War of Liberation in 1971 has shaped the contours of the relationship between our two countries. I was privileged to have taken active part in our Liberation War as a young military officer, in which I was wounded in the battlefield, taken prisoner of war and tortured brutally by the Pakistan army, charged with inciting mutiny and waging war against Pakistan. My trial in a military court was scheduled to start in December 1971. I knew I was facing certain death. All that changed with India joining the war from December 4. Personally, therefore, I owe a special gratitude to the Indian friends. 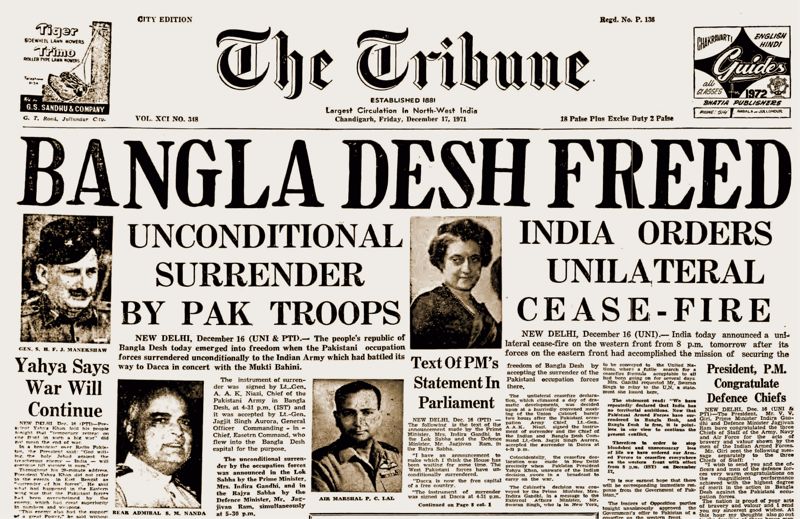 My own reflection of the events of 1971 has to start with March 7 that year. On that day, Bangabandhu Sheikh Mujibur Rahman, the undisputed leader of the Bengali people, addressed a mammoth public meeting in Dhaka’s historic Race Course Maidan. In his address, he called upon the Bengali people to turn their homes into fortresses and be prepared to face the enemy with whatever they had. He reminded all that having shed blood already, we were prepared to shed more blood and that the people of this land shall be liberated. He ended his fiery oration with a call, “This time the struggle was for our liberation; the struggle this time was for our Independence.” The battlelines were being drawn.

That same evening, at a secret meeting of senior Bengali army officers at Chittagong (now Chottogram), it was disclosed by Lt Col MR Chowdhury that Brig Majumdar, the seniormost Bengali officer, had gathered information that there was a plan by the Pakistan army to disarm all Bengalis in the armed forces as part of a bigger military action by them. This also included disarming the police and other para-military outfits like the East Pakistan Rifles (EPR). It was unanimously decided at the meeting that any such attempt by the Pakistan army would be resisted strongly, even if that meant mutiny. They also agreed to establish contact with the Awami League leadership and liaise.

The moment the Pakistan military launched their murderous assault on the Bengalis on the dark night of March 25, we, the Bengali officers and men of 8th East Bengal Regiment in Chittagong, mutinied against the Pakistan army. On March 26, we took an oath of allegiance to Bangladesh with Sheikh Mujibur Rahman as the leader. Within days, the mutiny had spread all over Bangladesh.

Between that day and April 11, I had taken part in a series of mostly guerrilla-style military operations against the Pakistan army in and around Chittagong city. Even when badly outnumbered and grossly under-equipped, we managed to inflict serious damage on the much better armed Pakistanis. Their morale was shaken, as was their confidence. What we lacked in men and material, we more than made up with our courage, conviction and a deep sense of patriotism. Importantly, the people of Bangladesh were with us in this great journey.

On April 11, I was wounded while defending the Kalurghat bridge. What I felt immediately after being hit was extreme pain in my leg and an unbearable burning sensation in the lower abdomen area. It was as if a burning rod had pierced through my body. The bullet had entered the left thigh, passed all the way through the lower portion of my belly before hitting my right hip, crushing it in the process.

I was apprehending that it was only a matter of time before the Pakistanis captured me and tortured me to death. That did not happen. For reasons best known to them, they chose to take me alive.

While I was lying wounded at the CMH at Chittagong Cantonment, I was attacked by a Major, who stabbed me multiple times with a bayonet, threatening to kill me. This was against all the norms usually practised in a hospital, even during a war. But then it would have been naïve on my part to expect any civility from a murderous military. By the time he was made to leave the ward by a brave nursing orderly, I was in a state of trauma and bleeding profusely from my nose, mouth and chest.

I was then transferred to Dhaka and taken to the Field Interrogation Centre. This was the beginning of my life as a PoW. Two events took place during my captivity that I feel are worth mentioning.

The first was at the very end of August when I was asked to turn a state approver. Maj Farooqi, my chief interrogation officer and a despicable human being, asked me to sign a statement that I had been aware from the beginning of March of a conspiracy by Sheikh Mujibur Rahman to break up Pakistan with India’s connivance. To this end, messages from Sheikh Rahman were being relayed to the Indians and the Bengali army officers were privy to all of this. We all know that Bangabandhu was never a conspirator, he was a leader. When I asked why he would want me to write such a fabricated story, his laboured reply was, “We have to justify our actions.” In his own words, Maj Farooqi was admitting that he needed my help to validate the genocidal acts of the Pakistan military. He said if I cooperated, I would be spared the death penalty and let off with a lighter sentence.

It didn’t take me long to tell Maj Farooqi that I refused to be a state approver. He turned red and fumed, “Well, you know the consequences of not cooperating.” I reminded him that I was not afraid to die. The very next day, September 1, I was handed a copy of my chargesheet that contained six charges, starting with abetting mutiny and waging war against Pakistan. The process for my trial in a military court was thus set in motion.

I still have a copy of that chargesheet. I look at it as my ultimate recognition, my biggest reward for being ready to fight and die for my cause. I had no regrets. On the contrary, my heart was filled with pride.

The second event happened in November. On the morning of 19th, precisely one day before Eid, I was told that my parents were there to visit me. Within minutes, I was hoisted onto a chair, and driven to an adjoining building where they were waiting.

My father told me that he had been approached by someone from the Pakistan authorities with a proposal that I should submit a written petition to the President, stating I had been misled by my seniors and, therefore, I express regret for my actions and I seek his mercy. I must also vouch total allegiance to Pakistan. My father had been assured that if I did this in writing, I would very likely not be given the death penalty, but would be dismissed from service and given a lighter sentence.

I calmly told my father that I had done nothing for which I should apologise and I shall never seek mercy from the Pakistanis. Whatever I did, I did with a clear conscience. If my response had caused my family any pain, they all managed not to show it.

On November 28, I was moved to another cell and kept in solitary confinement pending my trial. I was told the trial would start in the first week of December. Yet, just when I thought my ordeal would never end, the unthinkable happened.

In the early morning of December 4, my sleep was shattered by the loud screeching noise of fighter jets flying low. I got up, crawled to the window and managed to stand on one leg, holding the window grill of my cell, when I saw the unmistakable sight of Indian Air Force fighter jets pounding Dhaka airport relentlessly. Wave after wave of IAF jets were firing rockets at the installations of the airport, the only base for the Pakistan Air Force. This was not a movie I was watching; this was real live action I was witnessing with uncontrolled excitement. Around 11 am on December 16, I came to know that the Pakistan army had surrendered. I was excited and was anxious to go home.

It was not until very late afternoon that Maj Gofran, the camp commander, turned up at the cell. With a nervous smile, he walked up to me, shook my hands and said, “Well Shamsher, congratulations. You have won. We have surrendered. You have got your Bangladesh.” For a moment, I was speechless. I told him I wanted to go home and he should make the necessary arrangements. Maj Gofran said he was not sure if he could arrange transport right then since everything was in a state of chaos. He also felt that it might not be safe for us to go out at night. He assured us he could arrange better security for us inside the prison camp that night and we would go home the next morning. Very reluctantly, we agreed, but asked for a transistor radio to get the latest news. We managed to tune in to Akashbani. It wasn’t long before we heard the unmistakable and reassuring voice of Prime Minister Indira Gandhi saying the immortal words, “Dhaka is now the free capital of a free country. Joy Bangla.”

The moment would remain indelibly etched in my memory for as long as I live.

On December 17, a day after the ignominious surrender of the Pakistan army to the Bangladesh Mukti Bahini and the Indian military in the same Race Course Maidan, I walked out to a liberated and Independent Bangladesh. I was disabled for life, but proud to have been an integral part of the process.

It is rare in human history that one gets the privilege to fight for the freedom and liberation of one’s own motherland. I am most blessed to be among those privileged few.

*Bir Bikram is the third highest gallantry award in Bangladesh, introduced immediately after the Liberation War