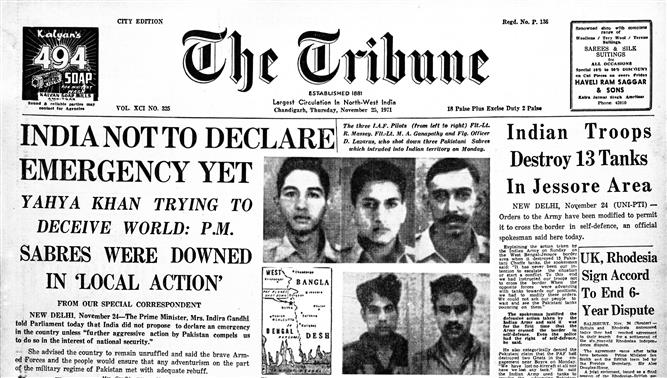 THIRTEEN days before the declaration of war in 1971, Pakistan army launched its biggest attack on the eastern front. The action took place near Garibpur village, some 7 km inside south-western East Pakistan, wherein one battalion of the Indian Army, with support from the artillery, armour and engineers, successfully took on the might of the enemy’s two infantry battalions supported by matching artillery, armour and recce and support combat elements.

In the early hours of November 21, under cover of dense fog, Pakistan’s 107 Infantry Brigade’s 6th and 21st Punjab battalions, supported by 49th and 55th Field Regiments (artillery) and 3 Independent Armoured Squadron (Chaffees), attacked Indian Army’s 14th Punjab Battalion (Nabha Akal) while it was in the process of organising its defences between Garibpur and Jagannathpur villages in Jessore sector.

While the companies were frantically digging the defences and anti-tank guns were in the process of reaching onto their firing positions, at 5.30 am, the Pakistani onslaught caught the battalion not yet fully on guard. But the Commanding Officer of 14 Punjab did not panic, for he knew the Nabha Akals would thwart any attack. He also knew that the Divisional artillery was deployed within range and ready to fire, and the armoured squadron had adjusted its tanks and fire arcs coordinated. With the most credible support of the Bulls (Gunners), the Bisons (Tankmen) and the Sappers and with grit and determination of its officers and men, 14 Punjab foiled the formidable attack and steadfastly held ground.

The battle raged for almost four hours during which the timely and effective support from the Divisional artillery comprising 6 Field Regiment, 14 Field Regiment, 67 Field Regiment and 881 Light Battery, PT 76 tanks of ‘C’ Squadron of 45 Cavalry and a platoon of 102 Engineer Regiment helped 14 Punjab beat back three determined attacks. The outcome of the ‘Battle of Garibpur’ truly paved the way for the creation of Bangladesh.

In those four hours, every combatant gave his best; the artillery guns and mortars fired at an intense rate throughout (the writer was Gun Position Officer with one of the batteries of 6 Field Regiment) without a single report of ‘gun loaded-gun hot’, the 14 Indian PTs took on 14 Pakistani Chaffees head-on and knocked 11 out at the cost of only two, and for Infantry and the Engineers, it was a close quarter battle throughout.

And from the iconic ‘Battle of Garibpur’ emerged three Maha Virs, namely Lieutenant Colonel RK Singh, Major DS Narang (Narag in official records) and Subedar Malkiat Singh; and four Virs — Captain GS Gill, the platoon commander of 14 Punjab who boldly rescued the artillery observation post (OP) officer after the latter was grievously wounded while engaging the enemy tanks before assault; Havildar Lekh Raj, the RCL gunner from 14 Punjab who singlehandedly destroyed one enemy tank; Captain RP Chaturvedi, the daredevil artillery OP officer from 6 Field Regiment who kept directing artillery fire from atop a tree, fully exposed to the enemy fire till he was shot down by the enemy tank’s machine gun fire — old-timers of 14 Punjab still swear by him — and Naib Risaldar RP Singh, the gallant troop leader of ‘C’ Squadron of 45 Cavalry who, at immense risk, gallantly led his troops and himself destroyed one enemy tank.

Among the four Sena Medal winners, Major Kailash Nath, the ‘Q’ Battery Commander of 6 Field Regiment, single-handedly directed the artillery fire after Capt Chaturvedi was seriously wounded and evacuated, and Lieutenant Ram Murthy, the dauntless Engineer Platoon Commander whose Sappers had no time to lay mines but excelled in infantry role, including in some fierce bayonet charges and assisted the battalion pioneers and headquarters personnel in not letting the attackers run over the battalion headquarters.

Lt Col RK Singh was commissioned into 13 Punjab (Jind Infantry), an erstwhile Jind State Force’s battalion which later got amalgamated with the Indian Army. Just before commencement of the war, he assumed the command of 14 Punjab (Nabha Akal), then a 217-year-old battalion that brought commendable laurels during the liberation of Bangladesh in 1971.

During the ‘Battle of Garibpur’, Lt Col RK Singh, for his exemplary leadership and conspicuous bravery, was awarded the MVC:

“Lt Col Raj Kumar Singh, who was commanding a battalion of the Punjab Regiment, was assigned the task of occupying a defended area between villages Garibpur-Jagannathpur on the eastern front to contain the enemy intruding into Indian territory. He planned and organised the defences held by his battalion with great skill and professional competence.

The enemy attacked the battalion defended area with two infantry battalions and a squadron of tanks. Lt Col Singh directed his troops with great courage and confidence. With utter disregard for his personal safety, he moved from one company locality to another, inspiring his junior commanders and troops. The enemy launched three determined attacks but all were beaten back with heavy losses. Throughout, Lt Col Raj Kumar Singh displayed exemplary courage, outstanding leadership and personal gallantry.”

Maj Daljit Singh Narang was commissioned into the Deccan Horse in 1956. Daljit, as a senior Captain, joined the newly raised 45 Cavalry Regiment in May 1965. Popularly known as ‘Chiefy’, Daljit, now a Major, was in command of ‘C’ Squadron of 45 Cavalry in support of 42 Infantry Brigade ex 9 Infantry Division. On November 21, Chiefy was destined to play a decisive role in beating back the biggest enemy attack of the 1971 war in East Pakistan. He was also to become one of the first three MVC awardees during the yet-to-be declared ‘Mukammal Jung’ by Pakistan.

For his exemplary leadership and outstanding personal gallantry during the tank-versus-tank battle (the only one in the eastern theatre), Major Daljit Singh ‘Chiefy’ Narang was awarded the MVC, posthumously. The account of his bravery reads:

“During Operation ‘Cactus Lily’, Major Daljit Singh Narag (sic) was commanding a squadron of a Cavalry regiment in support of an infantry battalion which was attacked by two enemy battalions supported by a squadron of Chaffee tanks. He skillfully and boldly manoeuvred his squadron despite heavy enemy fire and personally knocked out one enemy tank from the closest range. With utter disregard for his personal safety and undeterred by the enemy tank and anti-tank weapons fire, he directed the fire of his squadron standing on the turret of his tank.

His courage and fearlessness so inspired his command that they successfully decimated the enemy squadron of Chaffee tanks and stemmed the enemy advance. Major Narag, however, was killed atop his tank by enemy machine gun fire while leading his squadron.

Throughout this action, the conspicuous bravery, devotion to duty and supreme sacrifice of Major Narag were in the highest traditions of the Indian Army.”

The message about his death had numbed the minds of all tank crews till the voice of Capt Balram Singh Mehta, Squadron Second-in-Command, was heard on the air: “Delta 40 for all stations Delta, I have assumed command.” Capt Mehta, thereafter, led the squadron throughout as boldly as Chiefy would have wanted his number two to lead. Under his leadership, the squadron turned Garibpur into the graveyard of Pakistani Chaffee tanks.

Subedar Malkiat Singh was enrolled in 14 Punjab (Nabha Akal) in 1951. For his conspicuous bravery, Malkiat, now a Subedar, earned the MVC, posthumously. The battle account reads:

“Subedar Malkiat Singh was platoon commander of No 9 Platoon of ‘C’ Company of 14 Punjab (Nabha Akal), which was occupying a defended area around villages Garibpur and Jagannathpur. On November 21, his platoon was attacked by the enemy in overwhelming strength. Subedar Malkiat, undeterred, crawled from trench-to-trench encouraging his men to hold fast. He told all his section commanders to open fire only on his orders. He let the enemy come as close as 50 yards and then ordered fire. The entire platoon opened up with all platoon weapons, including lobbing of grenades. However, despite devastating fire, a section of Punjabis from Pak’s 6th Punjab battalion rushed closer than 50 yards and bravely fought the Punjabis of Indian 14th Punjab. In half an hour, hand-to-hand fight ensued; Pakistani Punjabis took a heavy toll on Malkiat’s platoon, but withdrew after having been overpowered by the Indian Punjabis. Subedar Malkiat remained in the thick of the close quarter battle till he was fatally bayoneted.”

The battle continued till the next day, culminating in shooting down of three Pakistani Sabres by the Indian Air Force.

Later, as prisoner of war, Brig Hayat Khan, Commander of Pakistan’s 107 Infantry Brigade, opened up: “As a result of this battle, not just my brigade but our entire 9th Infantry Division got completely unbalanced. The path to Jessore lay open and my brigade had no tanks left to support it in its future operations. Your PTs were no match to my Chaffees but I suppose that day luck was on your side.”

The iconic ‘Battle of Garibpur’ has gone down in Indian military history as a classic example of perfect synergy between the war efforts of the combat arms of the Army; the armour taking on the enemy armour in equal number head-on and nearly decimating the latter, the artillery leaving no stone unturned in assisting the infantry beat back repeated attacks by inflicting an unimaginable number of casualties, and the Engineers (just about 30 Sappers) excelling in infantry role too. But it was the infantry that held the ground steadfastly with vital support from the supporting arms.

Prime Minister Indira Gandhi broke tradition by mentioning this battle in Parliament on November 24, giving details of tanks and aircrafts destroyed when the war had not yet been declared — first time in tank-versus-tank battle, the enemy squadron was almost completely annihilated by an OIC (Other Indian Classes) squadron considered non-martial till Independence; three enemy Pakistani Sabres were shot down by three Indian Gnats in a dogfight, the high voltage drama in the air watched by many, including the writer.

Twenty gallantry awards were won in the battle, including three MVCs and seven Vir Chakras (three to top guns of the IAF).

This is what Lt Col Quazi SA Zahir (retd), freedom fighter and author from Bangla-desh, speaks of the 45th Cavalry Regiment: “The sacrifice and gallant action of 45 Cavalry during the 1971 war makes the regiment the pride of India, ‘The Bharatera Garbo’.”

I am sure he must have expressed similar appreciation for other participants as well at some other platform.