When violence is the object, not subject

Every season of Punjabi music is high on not just irrepressible beats but also on violence, chauvinism and materialism. Every now and then, Punjabi movies, too, find themselves trapped in the rut 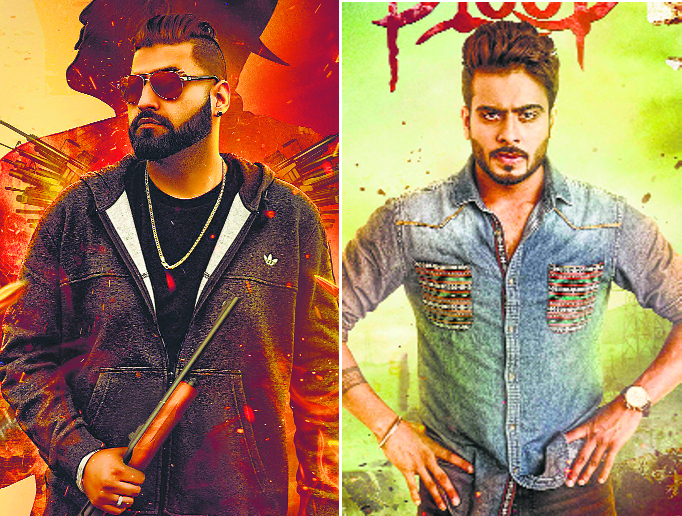 Chitta kurta labedeya tu khoon naal ve... Last counted, this Karan Aujla number had over 86 million hits. As one after another singer taps into gun and glory, violence-laced songs continue to define Punjabi music, catapult many to instant stardom and remain the topic of heated debate. Cultural activists, people in power and even the artistic fraternity have taken umbrage to what they view is not just unwarranted but offensive propagation of violence.

Not too long ago, the decision to form a Punjab Sabhyachaar (Culture) Commission to check vulgarity of songs was viewed as the panacea to all ills afflicting music. In fact, brouhaha ensues every now and then, some robotic responses are made, but with little effect. The charges against popular Punjabi culture more or less remain the same, but very little sticks. Every season of Punjabi music is high on not just irrepressible beats but also violence, misogyny, alcoholism and materialism. Every once in a while, Punjabi movies find themselves caught in the rut. Shooter, a film revolving around notorious gangster Sukha Kahlwan that was recently banned by the Punjab Government, is not just a case in point, but also points a finger in the other direction.

Is Punjabi pop culture the disease or symptomatic of a malaise that runs deep in Punjab’s socio-political matrix? Does it call for knee-jerk reactions such as banning of a film, slapping of cases against Sidhu Moose Wala and Mankirt Aulakh or a deeper introspection?

Noted playwright Atamjit says that thanks to Punjab’s geopolitical location and the past, gun is imbedded somewhere deep within us. “Whether we carry it on our person or not, it is always threatening to manifest in many visible ways. The fighting spirit is part of Punjabi DNA. However, our model was always sant-sipahi. Today the sant has gone missing, only the rudderless sipahi remains,” he says.

Net result: there is a surfeit of similar Punjabi songs upholding violence/guns as a badge of honour. So Balli Riar sings Koi Banda-Bunda Marna Taan Das; Jatt Di Dushmani Sir Mangdi comes from the stable of Raju Dinehwala; and Bhinda Aujla croons Je Mukri Taan Tere Pehli Goli Aap Hi Maraange. Even while talking of Pajeros and Boleros, the guns are not far behind. Rather, they quickly hop on to the bandwagon of luxury cars, yet another pre-occupation of our singers/writers.

Any wonder then that if the beat of Punjabi music can be heard outside the state, so can the deafening sound of its dunalis. Dr Dheeraj Sharma, a professor at the Indian Institute of Management-Ahmedabad, discovered how 60 per cent of the 2,000 songs he researched had references to drugs and violence. Add to it misogyny, daru-sharu, the all-too-predominant male gaze, the ever-shrinking space for feminist ideals… and actor-writer Rana Ranbir’s words — shabad in Punjabi music is dead — no longer sound like hyperbole.

As subjects, violence and sex are worthy of exploration. After all, if a Martin Scorsese can make Irishman, what is the problem with making a film on gangster closer home, or lending voice to gangsta rap? Atamjit reasons: “Violence can be a subject but not an object, which is exactly what popular Punjabi culture has begun to represent.”

Punjabi singer Jasbir Jassi of Dil Le Gai Kudi fame feels comparisons with other cultures is odious in the first place. “We have to look at our own journey, not blindly ape others.” Rana Ranbir agrees. “Artistes have been replaced by entertainers who are only interested in their place under the sun and have no relation whatsoever with artistic pursuits.” He even refuses to buy the argument that art reflects society. He says Punjabi music is less a reflection of the land’s culture and more about creating an impression, an adverse one at that. “It is definitely sullying impressionable minds, evident in the youth taking to rash driving, fights and even celebratory firings at weddings.” Thus, when a 22-year-old woman is killed in a celebratory firing at a wedding in Hoshiarpur, the blame is squarely laid at the doorstep of Punjabi music.

But is the equation as simple and the co-relation as direct? A Sidhu Moose Wala sings, “We live by gun and we die by gun”, and his fans actually pick up guns and resort to violence? Surjit Singh, professor and head of department of Punjabi, Punjabi University, Patiala, doesn’t think so. Under his guidance, Vinod Kumar undertook research to understand the link between writers’ lives and their written words. He shares how even a staggering majority of those writing about dunalis don’t actually own them and are not exactly writing from lived experiences. Rather, for them, too, these songs are an expression of hidden desires... Certainly what many of them are writing or singing has little literary merit and, as the thesis showed, 50 per cent of these songwriters have never ever read a book.

But we cannot shift the onus entirely on to the shoulders of the lyricists divorced from their literary tradition. “Clearly, the problem lies elsewhere, perhaps in the system itself that gives Sidhu Moose Wala an engineering degree but not the requisite skill set. So he transforms the fukra (superficial) lifestyle he picked up on the college campus into a saleable commodity,” says Surjit Singh. At the bottom of the malady, he believes, lie frustration and angst of youth who don’t foresee a bright future. Any suppression of this voice, the academician warns, will have far more dastardly consequences than a few provocative songs which are only symptomatic of a deeper malefaction.

While singers like Jassi feel a cultural policy as a watchdog can stem the rot, Atamjit insists that real change, rather the rejection of the lowbrow art, has to come from society. As long as such songs have a ready audience, millions of hits, cases or no cases, singers will find the means to bounce back.

Unsurprisingly, while the blame game continues ad infinitum, the solutions seem limited. Self-censorship has not worked. Pleas of fellow singers have fallen on deaf ears. Movements led by the likes of someone as important as cricketer Harbhajan Singh have been frittered away. Punjab government seems to be in hyperactive mode right now. Not only has it come down heavily on Shooter, 212 buses have been challaned for playing songs glorifying drugs and gun culture. But the juggernaut of youth anthems rolls on and is unlikely to be stalled anytime soon. Dr Surjit hits the nail on the head when he says, “These songs are the revenge of those for whom we have done little to elevate their aesthetics. At which level in our education system do we teach our youth to appreciate art?”

The problem at hand is far more complex, if not hydra-headed, and simplistic measures like a ban here or moral policing can do little to arrest the downward spiral in artistic quality. Until the root causes, the dreams and aspirations of the youth are understood, salvos will be fired from both sides. Misdirected, and the only hits here would be the rising number of views on the YouTube.