Why no official remembrance of 1962 : The Tribune India

Defeat in war against China, feel veterans, cannot obliterate the valour and sacrifices of Indian soldiers in the face of heavy odds 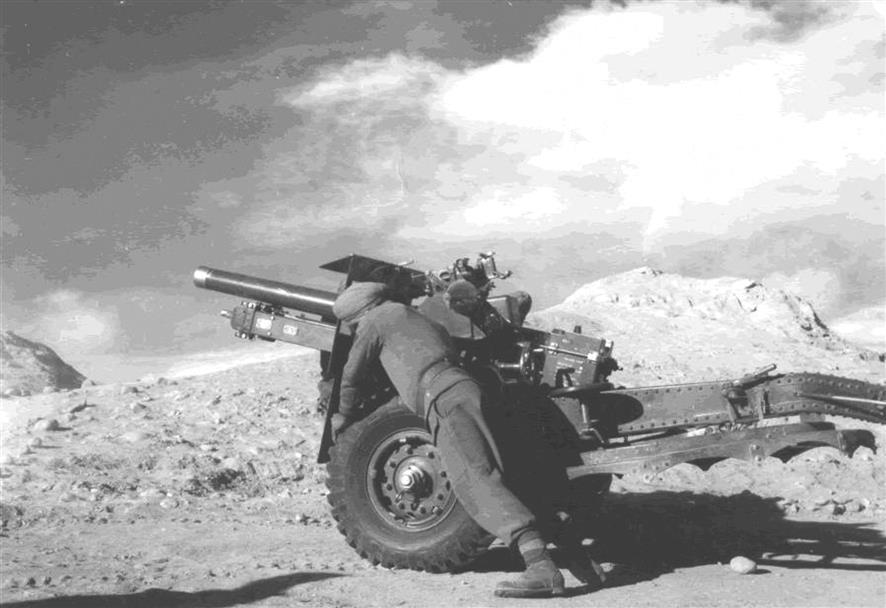 In the past 60 years, there has been no official function by the MoD to commemorate the soldiers who laid down their lives in the India-China war in 1962. Photo courtesy: MoD

IN the past 10 days, the Indian Army commemorated separate battles of the 1962 India-China war. However, like in the past 60 years, this year, too, there was no official function by the Ministry of Defence (MoD) in the national capital to mark remembrance or commemoration for the soldiers who laid down their lives during the war.

Several retired soldiers are in favour of an official function steered by the MoD, and not just Army commemorations at several locations in the Himalayas. With the National War Memorial having come up in the national capital, an official remembrance, it is felt, would be appropriate for those who died in the war that began on October 20, 1962, and lasted till November 21. The memorial has a tablet in the name of every Indian soldier who died for the country.

It could be a solemn wreath-laying ceremony each year to honour the 3,250 soldiers who laid down their lives in 1962, the veterans opine.

Right through the 1962 Sino-Indian conflict, Indian troops were out-numbered four to one, were ill-prepared and ill-equipped. As per records, the supply lines for ammunition had snapped, forcing commanders to order retreat. Despite that, some of them stood up and fought against the People’s Liberation Army (PLA) of China to the ‘last man last bullet’.

Multiple personal accounts written by military officers of those times, researchers and also the History of the Conflict with China, 1962 — produced by the MoD and released for ‘restricted’ circulation in 1993 — have a common thread. All accept that the India-China war in 1962 ended as an example of bad military planning. However, two battles — the one at Walong in Arunachal Pradesh and the other at Rezang La in eastern Ladakh — are most talked about. These have been mentioned in glowing terms in all references of the war. There were glimpses of military brilliance elsewhere too.

India celebrates the victory of the 1971 war with Pakistan as ‘Vijay Diwas’ on December 16 and also the victory in the India-Pakistan ‘Kargil conflict’ on July 26. On both occasions, ceremonies are conducted centrally. The Navy Day celebrated each year on December 4 is to mark the attack launched by Indian warships to target Karachi harbour the same day during the 1971 war.

Can a ceremony be conducted for the war dead of 1962? Lt Gen Shokin Chauhan (retd), who was Director General of Assam Rifles, says, “I strongly suggest that soldiers who died in the 1962 war should be remembered, let’s have a ‘remembrance day’.”

Citing the example of ‘remembrance day’ in the United Kingdom, Lt Gen Chauhan, who had commanded the premier 1 Strike Corps at Mathura, adds, “We can have one like that.”

A former Defence Secretary, who did not wish to be named, said, “It will be a political call on what sort of function can be done to honour the dead of the 1962 war.” Since the war did not end in a win, the country never remembered it by expressing it through an official function and that is the only possible explanation for the lack of a formal ceremony, the former Defence Secretary added.

Under the present system, even the Chief of Defence Staff, who heads the Department of Military Affairs, can suggest what sort of homage can be paid to the dead of the 1962 war.

Air Vice Marshal Manmohan Bahadur (retd), former Additional Director of the IAF-backed think tank Centre for Air Power Studies (CAPS), says, “Our jawans fought to the Army’s credo, ‘last man last round’. It was India’s war and not the Army’s or any political party’s war.”

Growing up in the 1960s, he recalls, “one saw the trauma and shock of defeat during the war, along with tales of unprecedented valour. And to see that not even a wreath was laid at the National War Memorial on behalf of the Services is painful”.

It’s never too late to start such a remembrance ceremony, argues Lt Gen Chauhan, who also headed the ceremonial and welfare wing tasked with conducting such functions.

“The lack of a ceremony means the tablets with the names of the dead at the war memorial are just pieces of concrete, the soul is missing,” AVM Bahadur says.

Despite being numerically inferior, the Indian troops held back the Chinese at Walong in Arunachal for days. History of the Conflict with China, 1962 describes the battle: “A defensive battle against heavy odds, the troops fought bravely, but being out-numbered and out-weaponed in automatics and ammunition, suffered heavily.”

The Indian Army had 2,500 troops, the Chinese were five times that number, aided by artillery and automatic weapons. The Chinese launched the first attack on October 21 1962, but lost 60 soldiers. Regardless, they pressed forward and made two unsuccessful attempts to capture Walong. Each time they were repelled by 4 Sikh and a company of 2/8 Gorkha Rifles (GR).

The Sikhs attacked the Chinese on October 26. Sepoy Kewal Singh of 4 Sikh was awarded the Maha Vir Chakra (MVC).

A 10-day lull followed. The 4 Sikh Regiment and 6 Kumaon had been tasked to the area on September 21, while the 3/3 GR replaced two companies of 2/8 GR in the first week of November. The 4 Dogra fetched up on November 9. The Intelligence Bureau headed by BN Mullick assessed that “six Chinese battalions (some 4,800-5,000 men) were positioned across Lohit river”.

On November 6, the first Indian attack was launched by a company led by Capt RK Mathur of 6 Kumaon. “15 Chinese died,” read the post-war Vir Chakra citation of Capt Mathur.

The Kumaonis launched another attack on yellow pimple (a hill feature) and charged up in the face of a shower of bullets. The attack reached about 20 metres short of the top. Of the 200 Indian troops who assaulted yellow pimple, only 90 returned.

A few miles away at ‘Patrol base’ —located behind green pimple and yellow pimple — the ‘A’ company of 4 Sikh came under fire but beat back the enemy. With ammunition running out, the Sikhs were asked to withdraw. Across the Lohit, the ‘D’company of the Sikhs was attacked. It was a bitter fight. It halted only when the company commander, Lt Yog Plata, was killed. He was awarded a Vir Chakra.

On the west ridge overlooking Walong, Lt Bikram Singh of 6 Kumaon held on for hours. Only 17 of his troops survived; the rest, including Lt Singh himself, died fighting to the last bullet.

“Indian troops offered stiff resistance, but they had to vacate their positions,” says the MoD’s book.

The Indian Army held back an assault by the PLA at Rezang La in eastern Ladakh, located at an altitude of 18,000 feet and smack at the Line of Actual Control (LAC) with China.

Rezang La sits astride the routes to Chushul to its west and Dungti to its south-east. From Chushul garrison, the road link is to Leh. The occupation of this feature would have enabled the Chinese to cut off the single road to Leh, isolating the garrison and its vital airstrip.

The battle at Rezang La waged for some 18 hours. Starting from 4 am on November 18, 1962, till about 10 pm that night, the ‘C’ company of 13th battalion of the Kumaon Regiment held on against the enemy strength of some 1,000. The commander of the ‘C’ company, Major Shaitan Singh, was conferred the Param Vir Chakra. Eight more received the Vir Chakra while four others the Sena Medal. The 13 Kumaon received the battle honour ‘Rezang La’.

A History of the Conflict with China, 1962, says: “The fight at Rezang La was hard and bitter… It was littered with the dead Chinese... The Indian soldier was defeated but not disgraced in Ladakh.”

The Chinese casualties are officially estimated at 500. In 1963, when the Red Cross teams went to recover the bodies, they saw the place littered with field dressings and blood marks, indicating heavy casualties suffered by the enemy.

The PLA had sent in 400 men in the first attack which was repulsed and then added more to have some 900 men surround Rezang La from three sides. The battle is seen as one of the reasons that the Chushul garrison was not overrun.

Maj Shaitan Singh had three choices — hold on to his position and fight on, break out towards the rest of the battalion but that would be at the risk of additional casualties, or lastly, surrender and save the lives of his remaining men. He stayed on and the rest is history.