‘Women need to stand up for themselves,’ says Jasmeet K Reen, director of Darlings, a black comedy on : The Tribune India

‘Women need to stand up for themselves,’ says Jasmeet K Reen, director of Darlings, a black comedy on 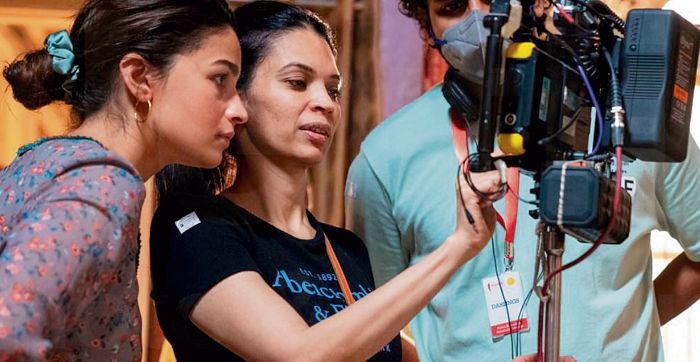 “We have not taken the issue of domestic abuse lightly, nor are we advocating male bashing. Our message is very clear.” These words of Jasmeet K Reen ought to be a befitting rebuttal to the tribe of naysayers and the trollers questioning the premise of her directorial debut Darlings. The young director, also the co-writer of the film, shares what made her present the burning issue of domestic violence as a comedy.

First things first, her one-line story brief was about a mother and daughter trying to fix the daughter’s marriage. Indeed, the subject of domestic abuse was uppermost on her mind. Only she never thought she was taking a big risk by going in for black comedy to bring the horror of abuse to the fore.

She says, “Here the situation is comedic. It is not that these women are cracking jokes. Rather, humour emanates from the fact that these women are trapped in a mess and are scared.” And that is what dark humour is all about… it’s not laughing at the subject. Rather, she insists, “We, including the actors and producers, have been very responsible and acutely sensitive about the seriousness of the issue at hand.”

Since the movie juxtaposes poetic justice with taking control of one’s destiny, what path would she truly advocate? Certainly, she advises women to stand up for themselves and walk out of the situation, even if the narrative follows a different arc. But then, a film, she believes, is not going to reform or change society, it can at best be a conversation starter. If you are wondering why, in a country where laws against domestic violence are rather stringent, she didn’t explore the legal option more, the answer is simple: as corroborated by her research, a whole lot of women in India actually don’t exercise their legal right even when they know about it.

Jasmeet diligently researched for the film but stayed away from writings or films tackling the subject. She admits, “One has seen so much, both in life and cinema, that somewhere deep within, it sticks, and one ends up joining the dots. But there were no deliberate or conscious reference points.” Once the idea crystallised in her mind, she spoke to many women so that “the women we represent are understood with empathy and responsibility”.

And there were no particular reasons for placing a Muslim family at the heart of the film except that Byculla, Mumbai, where the film is set, has a delightful lingo — a mix of English, Urdu, Hindi and Marathi.

For those who can see a world of meaning in the title Darlings, no pun was meant or intended. While she sticks to the script, there’s an advantage of being a director writer: “You can tweak a few things and rewrite a few scenes.” On the sets, however, it’s the director within who calls the shots.

As a debutant, directing a powerhouse of talent like Alia Bhatt and Shefali Shah could have been intimidating. But she considers herself lucky at having the best (lyricist Gulzar, music director Vishal Bhardwaj) on board. “A director’s job is to get the best out of one’s cast and crew. When they are already so good, you are pushed to do better.” She adds, “On the first day of your shoot, there are 140 persons, with far more experience than you, looking at you for direction. So what is it that you know better… well, you know your script best. Thus, you have to filter what works best.”

While this sardarni, ready with a script on the indomitable poet Sahir Ludhianvi, can’t say whether her Punjabi genes have influenced her cinema in any way, the fact that Punjabi women are indeed strong could have rubbed on the essaying of ‘Darlings’ as daring. Among the many takeaways from the film, the one she would like viewers to absorb is: respect yourself. Meanwhile, the woman who began her career with advertising is busy taking a bow.