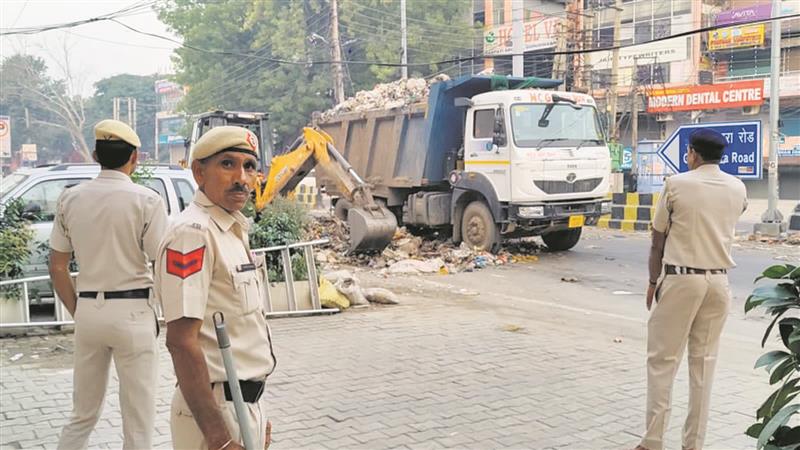 The ongoing strike of sanitation workers has led to the entire city being “buried” under garbage.

The protesters have not only dumped 1,300 tonnes of garbage on the streets across the city, but are also waging a war against Ecogreen Energy, the concessionaire engaged by the Municipal Corporation of Gurugram (MCG) for waste management, to stop it from picking up garbage.

Cops not only accompanying garbage vans for collecting domestic garbage, but also getting roads cleared using JCB in at least 10 areas.

The protesters are attacking vehicles, puncturing tyres of waste dumpers and threatening people. Ecogreen has sought police protection, especially in areas like Rajiv Nagar Sector 12, New Colony, Gurgaon village, Patel Nagar and Lakshman Vihar. “We have sought police help to continue picking garbage. Our vehicles are being attacked. The police are now accompanying us,” said an official spokesperson of Ecogreen. Meanwhile, over 1,000 police personnel have taken it on themselves to bring the situation under control. The policemen are now accompanying garbage vans to get domestic garbage collected and also getting roads cleared using JCB in at least 10 areas. Preet Pal Sangwan, Assistant Commissioner of Police (Crime), said they have deployed teams for the safety of the Ecogreen staff and for clearing the garbage.

“We cannot let anybody hold the city to ransom. We are reviewing CCTV footage to nab troublemakers. The police will help residents in any way possible,” he said.

MCG Joint Commissioner Naresh Kumar said that their teams have been deployed at key spots to keep a check on the protesters.