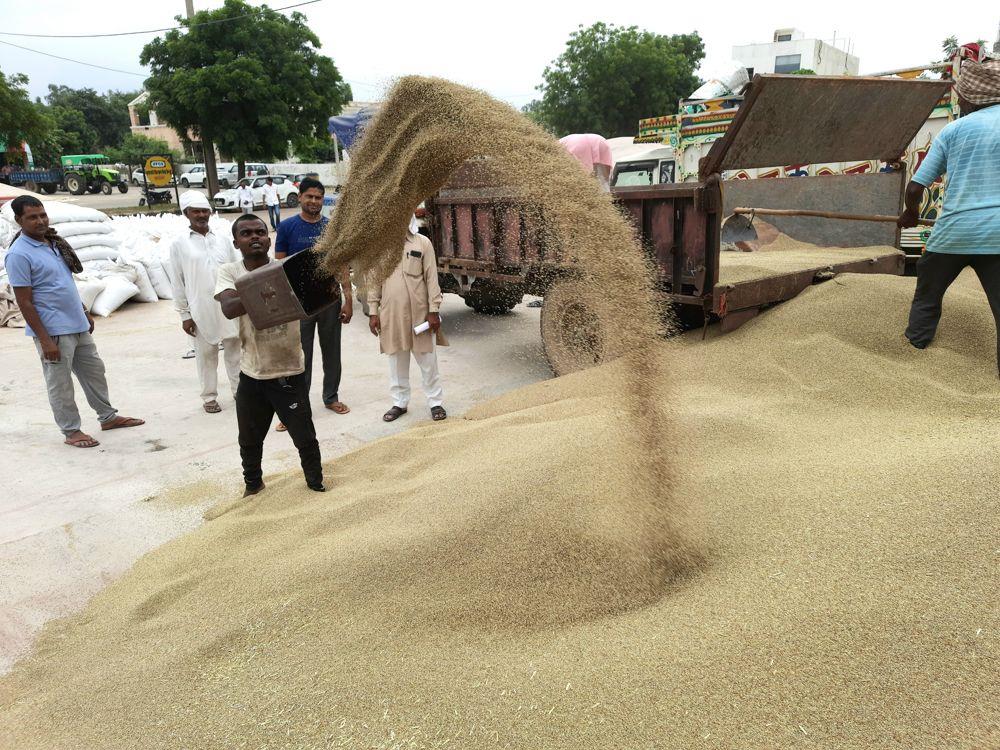 A labourer manages bajra at a grain market in Jhajjar. Photo: Sumit Tharan

The state government’s claim of making payment to farmers within 72 hours of the procurement of their bajra has fallen flat as the bajra growers in Rohtak, Jhajjar, Rewari and Mahendragarh districts have not got payment even after two weeks. They are compelled to make rounds of grain markets to get updates about payment but local officials are not in a position to clear the situation.

More than 11,000 farmers in the four districts have sold their bajra to HAFED, a government agency, this season at rates ranging from Rs 1,900 to Rs 1,950 per quintal while the Centre had announced Rs 2,350 per quintal as the minimum support price (MSP). However, the state government has announced to pay Rs 450 per quintal to farmers under the Bhavantar Bharpai Yojana (BBY) to bridge the gap between the MSP and the buying rate.

The procurement of bajra started at grain markets of various districts on October 1 and no procurement has been done in the past one week after the state government announced to extend the bajra growers a financial aid of Rs 450 per quintal under the BBY.

“I sold bajra to HAFED in the beginning of procurement but I am yet to get payment. The money is needed not only to repay the loan but also to buy seeds and fertilisers for next crops,” said Ravinder Kumar of Aurangapur village (Jhajjar).

Barhmanand of Nigana village (Rohtak) said more than 35 quintals of bajra was sold to the government over two weeks ago but the payment had not yet been credited to his bank account. “The situation is similar with other farmers of my village. We have no option but to wait for the payment,” he added.

Inderjit Singh, state vice-president, All India Kisan Sabha (AIKS), said the government made hollow promises of releasing the payment within 48 hours. “It should release payments without further delay otherwise we will launch an agitation,” he said.