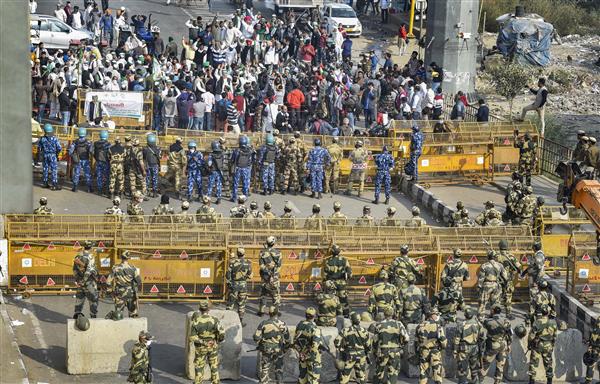 Police stand guard as the Bharatiya Kisan Union members protest at Ghazipur border during their 'Delhi Chalo' march against the new farm laws, in New Delhi on Monday. PTI Photo

At least 130 khap panchayats (community courts) of Haryana on Monday announced that they would join the ongoing farmer agitation on Delhi borders from Tuesday.

“All khap men are first farmers and then leaders,” khap spokesperson Jagbir Malik told the media.

The farmers of Haryana have also been appealing to the Central Government to listen to the farmers.

Malik said all khaps of Haryana have unanimously decided to support protesting farmers by all means.

The importance of the khaps, especially in the politically dominant Jat community, is such that even Prime Minister Narendra Modi, at a rally in Jind, had to seek their blessings for the BJP for the 2014 assembly elections. IANS