200 booked for attack on police in Hisar district : The Tribune India

200 booked for attack on police in Hisar district 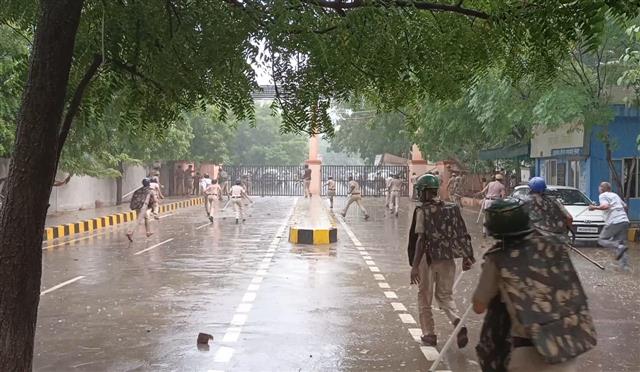 The police resort to lathicharge in Hisar. file

The Hisar police have booked about 200 persons in connection with a clash between protesters and the police at the mini secretariat here yesterday. They have been booked on charges of rioting and attacking the police.

Four accused were identified as Bajrang Indal, Pradeep Bhankar, Sant Lal Ambedkar and Chage Ram. Chage Ram was arrested by the police and produced in a court that remanded him in 14-day judicial custody.

The police said six cops were injured as protesters pelted them with stones. The protesters, who were led by some social organisations, including the Bhim Army, also alleged that some of their activists were injured in the lathicharge by the police.

Inspector Kanwal Singh lodged the complaint with the Civil Lines police stating that he was deployed at the entrance of the mini secretariat along with 60 cops for maintaining law and order. The protesters, who had announced to hold demonstrations in support of their demands, arrived at the mini secretariat and tried to forcibly enter it with an intention to disrupt a meeting of the Power Minister.

He said the police tried to placate them and assured that an administrative official would reach out to them and listen to their demands. The protesters, meanwhile, started throwing stones on the cops, forcing the police to resort to lathicharge.

An activist of the National Alliance for Dalit Human Rights Rajat Kalsan alleged the police provoked the protesters and then resorted to lathicharge, adding that around 25 persons suffered injuries and 12 activists were kept in illegal detention by the police.