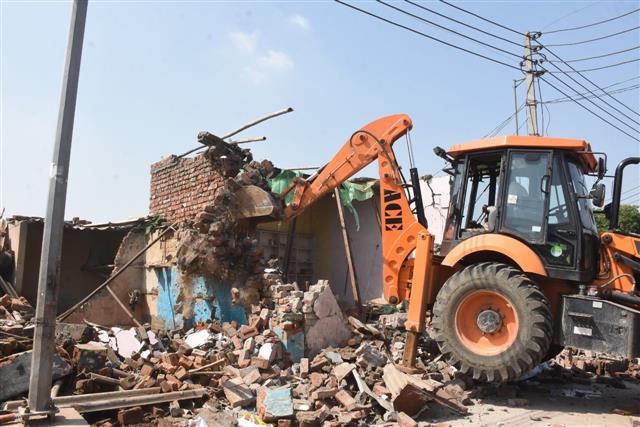 Demolition drive was carried out by Faridabad police under the directions of Deputy Commissioner Vikram Kumar. Tribune Photo

Twenty-five buildings built by a drug smuggler on the illegally occupied government land near a fish market here were demolished during a demolition drive on Tuesday, police said.

The drive was carried out by Faridabad police under the directions of Deputy Commissioner Vikram Kumar.

A day before the demolition, a flag march was also conducted by the police in the area.

Police spokesperson Sube Singh said, "Faridabad Police has demolished 25 buildings constructed by former drug smuggler Bijendra alias Lala by smuggling drugs and liquor and illegally occupying the land of the Central Public Works Department (CPWD). It includes 18 shops, 3 houses, 3 warehouses and 1 office. About two and a half acres of land of the CPWD was illegally occupied in many places, which was freed and handed over to the CPWD.”

Police spokesperson Sube Singh added that the entire family of smuggler Lala was involved with him in criminal activities.

Lala had started smuggling liquor and has been living in illegal houses since 2011. After this, the accused was involved in crimes like murder, drug smuggling and fighting.

Lala had gone to jail many times and died around eight months ago.

A senior police officer said until recently, the business of drugs in the fish market was ruled by Bijendra alias Lala. After his death last year, his relatives were doing this business.