Two succumb to infection, 12 under treatment 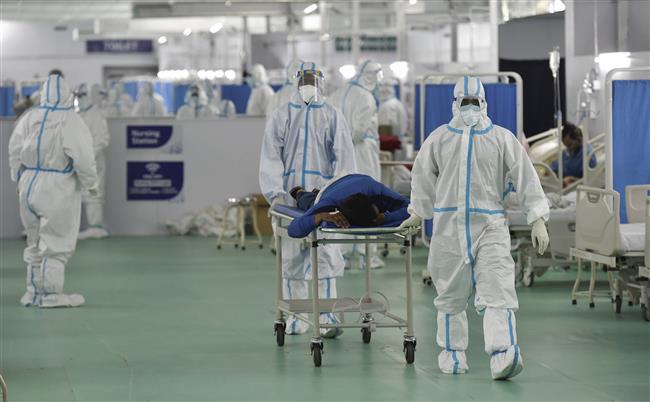 A health worker gives a jab to an elderly man in Gurugram. PTI

Even as Covid continues to devastate people in Haryana as also in other parts of the country, mucormycosis, or black fungus as it is commonly called, is posing a new threat in the state.

Since the start of the pandemic, 27 cases of black fungus have so far come to Post Graduate Institute of Medical Sciences (PGIMS) and two private hospitals in Gurugram. Of the infected, two have died and 12 are currently under treatment, said Dr Dhruv Chaudhary, Head of Pulmonary Department of the PGIMS and state nodal officer for Covid 19.

What is worrying is the fact that a majority of these cases have come to the hospital during the second wave of the deadly virus – 5 of these came in the past one week.

“Almost all those who survived the infection had to undergo surgeries of the ear, nose, throat (ENT) or the eyes,” revealed Dr Chaudhary. Doctors say that mucormycosis is a very rare infection, which is caused by exposure to mucor mould, a fungi, which is commonly found in soil, plants, manure, and decaying fruits and vegetables.

The black fungus attacks the sinuses, brain and lungs and can be life-threatening in diabetic or severely immunocompromised patients.

Doctors believe mucormycosis, which has an overall mortality rate of 50%, is perhaps being triggered by excessive use of steroids, which are being administered to severe and critically ill Covid-19 patients to save their lives.

Doctors are prescribing steroids to reduce inflammation in the lungs due to Covid-19. But as a side-effect, the steroids also reduce immunity and raise blood sugar levels in both diabetic and non-diabetic Covid-19 patients.

“Whenever a suspected case of mucormycosis comes to the hospitals, ENT surgeons do a nasal endoscopy to diagnose the infection. Once confirmed, the treatment which can include surgeries begins immediately. The fungus grows speedily and once it affects the brain, it can be life-threatening,” said Dr Chaudhary.

He said the PGIMS has in stock 180 injections of Liposomal Amphotericin B that are needed in the treatment and order has been placed for 400 more since nearly 30 injections are normally consumed on a single patient.