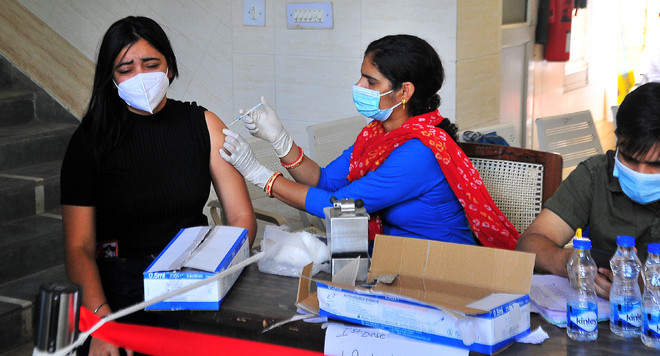 A woman gets the jab in Sector 31 of Gurugram on Monday. S Chandan

Haryana, where a week-long lockdown started on Monday to curb the spread of Covid, added nearly 2 lakh cases and about 1,300 fatalities between April 1 and 30.

Gurugram, which is the worst-affected district, contributed 59,540 cases during April. Faridabad, Hisar, Karnal and Sonepat districts also fuelled the sharp increase in infections.

The total fatalities increased from 3,164 to 4,216 during the period, it showed.

Meanwhile, half of the state’s 22 districts have been placed in the red category, which means these districts have a positivity rate ofmore than 6 per cent.

As per the WHO guidelines, the desirable positivity rate is less than 2 per cent. If it is more than six per cent, it is considered critical.

Meanwhile, in the past one week (April 26 to May 2), the state reported 90,569 new cases and 719 deaths. The two figures are the highest ever over the seven-day period ever since the virus broke out in the state.

“Higher positivity rate means that the state is not doing enough testing to trace and isolate Covid patients. This, in turn, is resulting in the surge,” said a doctor requesting anonymity.

“The state plans to increase the testing by rapid antigen testing (RAT) kits,” he added.

With the surge in cases, the transmission rate, also termed as reproduction rate, has also shot up to 1.40, the highest since the onset of the pandemic in March last year. "The transmission rate of 1.4 means that each group of 100 patients is infecting 140 healthy people," said an expert.

With the surge in cases, the transmission rate, also termed as reproduction rate, has also shot up to 1.40, the highest since the onset of the pandemic in March last year. “The transmission rate of 1.4 means that each group of 100 patients is infecting 140 healthy people,” said an expert.