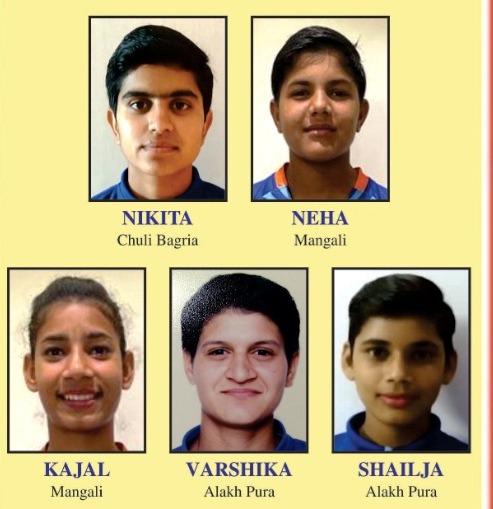 After leaving their imprint on hockey, boxing and wrestling, Haryana girls have now done well in football. Five girls from Hisar and Bhiwani districts are in the 23-player Indian squad that will take part in the FIFA Under-17 Women’s World Cup starting tomorrow.

While Neha’s father Dharambir is a MNREGA worker at Mangali village, Kajal is the daughter of a small farmer in the same village of Hisar district. These two girls along with Naketa of Chuli Badiyan village in Hisar district, and Varshika and Shailja of Alakhpura village in Bhiwani district have been chosen to play for the country in the tournament being hosted by India from October 11 to 30.

This time, they will be seen facing opponents like Germany, Spain, the US, Brazil and Japan which are known as powerhouses of football at the international level.

Out of 23 players, five girls are from Hisar and Bhiwani districts. This is a remarkable achievement, said Hisar MP Brijendra Singh. He said that these girls have proved their mettle at the national level on different occasions. Belonging to lower and lower-middle class families from rural areas, these girls had earlier lifted the prestigious Subroto Cup, he informed.

Football lovers in the area said that they have reached the top level with the help of local coaches despite the lack of basic infrastructure like well-maintained ground and other equipment.

Sukhwinder Dhillon, a coach of the Education Department, said that she encouraged girls to play football when she got a posting in the Government Girls’ Senior Secondary School at Mangali village about 16 years ago. “The girls are so skillful and tough that I managed to raise a good team in a short span. Later, the school team became the state champion three times and won the Subroto Cup in 2015 which is an international-level event,” she stated.

Dhillon informed that the team of the Government Girls School at Alakhpura too had won the Subroto Cup some years ago. Besides, the girls of Sadalpur and Chuli Bagria villages in Hisar district have played at the national level.

The football coach maintained that at present, about 30 girls from various villages adjoining Mangali village who had studied in the Government Girls’ Senior Secondary School at Mangali are playing with various national-level football clubs in the country.

“These girls belong to poor and middle class families who cannot afford the expenses of a nutritious diet and equipment for players. They have proved themselves at the national level and 20 of them have got government jobs in the sports quota,” she said.

Sanjay Kumar, a panchayat member of Alakhpura village in Bhiwani district, said that the girls of the village are fascinated with football. “A sports teacher, Goverdhan, encouraged the girls to play football for recreation. Later, the girls made their mark at the national level and won many prestigious trophies like the Subroto Cup. The villagers also back the girls’ football activities,” he said.