500 coal-based Panipat units to shut down today : The Tribune India 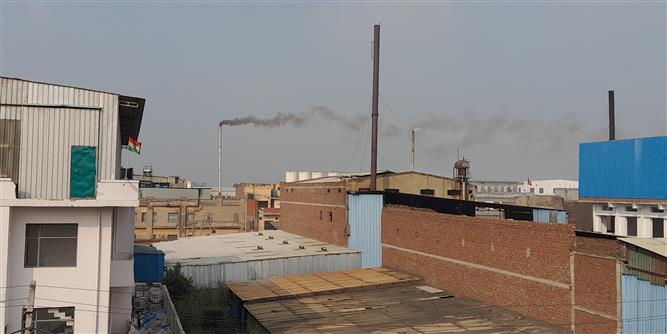 Following the directions of the Commission for Air Quality Management (CAQM), over 500 industries in Panipat, especially dyeing units along with export houses, mink and polar blanket units, will be shut down from tomorrow.

Following the directions of the Commission for Air Quality Management (CAQM), over 500 industries in Panipat, especially dyeing units along with export houses, mink and polar blanket units, will be shut down from tomorrow.

}If there is round-the-clock power supply, no one will go for genset power, as it raises the cost of production by up to 20%. Industry in Faridabad and G’gram is unable to bear an additional cost of Rs 20K cr on conversion. Rajiv Chawla, Chairman, Integrated Association of Micro, Small & Medium Enterprises of India

In Sonepat also, as many as 400 industries, including dyeing units and rubber factories operational on coal-fired boilers in the industrial areas of the district, will be closed from tomorrow for not switching over to the cleaner fuel.

The Haryana State Pollution Control Board (HSPCB) will, meanwhile, launch a special checking mission from tomorrow for the implementation of the directions of CAQM.

Failing to get relaxation from the Commission for CAQM, the Panipat Dyers Association on Friday unanimously decided to shut their industries from Saturday.

However, following the directions of the CAQM, some industries have now started switching over to cleaner fuels like biomass and piped natural gas (PNG). Only 40-42 industries in Panipat have the PNG connections which can be operational as per the directions.

The CAQM had issued directions in February that if any industry in the designated industrial areas was found running on conventional fossil fuel such as diesel, coke, HSD in the NCR region, it would be shut down after September 30.

The CAQM had also directed that the operation in the industries should be carried out on cleaner fuel, including piped natural gas (PNG/CNG), LPG, biogas, propane, butane, biomass fuels such as paddy straw, rice husk, wooden blocks from October 1.

Besides, the graded response action plan (GRAP) would also come into effect from October 1 in the NCR. The Haryana State Pollution Control Board (HSPCB) has already directed the district administrations of 14 districts under the NCR to prepare for the implementation of GRAP.

Notably, Panipat is globally known as the textile hub and has an annual turnover of Rs 40,000 crore (approximately) in the domestic market.

Bhim Rana, president, Panipat Dyers Association, said around 600 factories here, including dyeing units, export units, polar and mink blanket, units have no option but to shut down from Saturday.

Around six lakh workers are employed in approximately 25,000 textile industries in Panipat directly or indirectly and after the closure of these industries, all labourers would be unemployed, he added.

Compliance by 40 industries only