549 pesticide samples fail in 5 years in Haryana, 270 in Punjab, none in Himachal 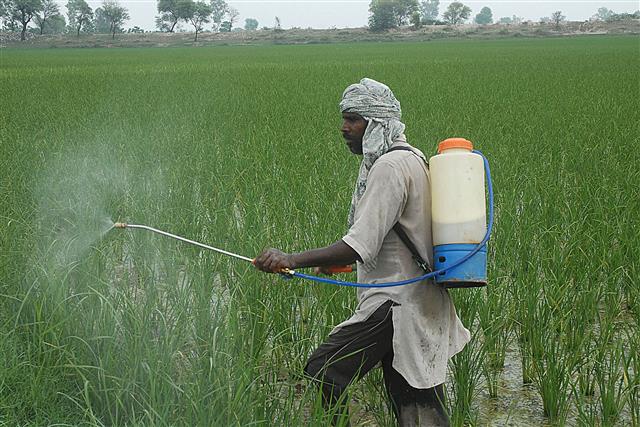 Haryana and Punjab where hundreds of acres of crops get damaged every year due to pest attacks are recording a number of cases of sub-standard pesticides.

270 in Punjab, none in Himachal Pradesh

From 2017-18 to 2021-22, 549 samples of pesticides failed quality tests in Haryana, while in Punjab 270 samples were declared sub-standard in the same period.However, none of the samples failed the quality test in Himachal Pradesh

As many as 549 samples of pesticides failed quality tests in Haryana in the past five years, from 2017-18 to 2021-22, while in Punjab 270 samples were declared sub-standard in the same period.

However, none of the samples failed the quality test in Himachal Pradesh (HP).

As per the data shared by the Centre in the Lok Sabha during the ongoing Monsoon session, 1,506 samples of pesticides were analysed in 2017-18 in Haryana, and 49 were found to be sub-standard (3.3%). Prosecution was launched in 26 cases against firms involved in the manufacture, sale and illegal import of the sub-standard pesticides, while in 14 cases, accused got convicted.

During 2018-19, 1,540 pesticides samples were tested in Haryana and 84 samples were found of poor quality (5.5%). Also, the prosecution was launched in 58 cases against firms, while the accused got convicted in four cases.

In 2021-22, 1,676 samples were tested and 125 failed quality tests (7.5%). In 21 cases, the prosecution was launched against firms involved in the sale, manufacture, and illegal import of pesticides.

During the past five years, a total of 3.40 lakh samples of pesticides have been analysed in the entire country and in 3,639 cases, prosecution has been filed against firms. In 137 cases, the firms have been convicted by the courts.

In reply to a question in the Lok Sabha on July 29, Minister of State for Chemicals and Fertilisers Bhagwanth Khuba said as per the Insecticides Act 1968, the quality control of pesticides was primarily conducted by the states being the licensing authority.

Insecticide inspectors appointed by the state governments and the Centre under Section 20 of the Insecticide Act have been vested with powers to enter, search premises, seize documents, stop distribution, sale, or use of the stock of insecticides and take insecticide samples for analysis at State Pesticides Testing Laboratories to ensure that the conditions of the Certificate of Registration or Licence and provisions of the Act were complied with.

Khuba added that insecticide inspectors periodically inspected the manufacturers, distributors, dealers, and retailers within the area of their jurisdiction.