AAP in saddle, Punjab must ensure water to SYL: Khattar 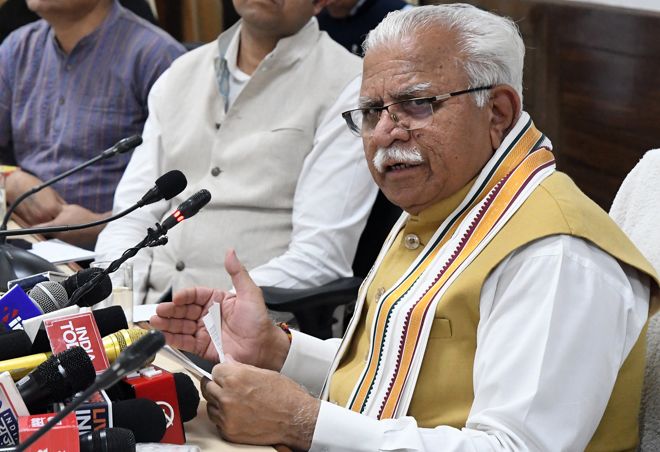 Putting the onus of the Sutlej-Yamuna Link (SYL) canal on the newly formed Aam Aadmi Party (AAP) government in Punjab, Chief Minister Manohar Lal Khattar said it was now doubly responsible since Haryana had to take water from Punjab and give it to Delhi.

Addressing a press conference here today, Khattar said in such a situation, the responsibility of the Punjab Government to provide water for the SYL was more, because now both states were ruled by the AAP.

Party also at helm in Delhi

The new Punjab Government is now doubly responsible since Haryana has to take water from Punjab and give it to Delhi... Punjab’s responsibility to provide water for the SYL is more, as now both the states are ruled by the AAP. —Manohar Lal Khattar, CM

Responding to a question, he said the Punjab Government would now have to think when the Budget of the state would be presented in a few days. The debit to the GSDP ratio of the state is 48%, which is just 24.98% in Haryana.

“I’m not worried about the AAP coming to Haryana. Delhi is small compared to Haryana. There are about 1,100 government schools in Delhi, but there are 15,000 government schools in Haryana. At the same time, the cultivated land there is very less compared to Haryana, as Haryana has 80 lakh acres of agricultural land. Similarly, different regions have different conditions, so Delhi cannot be compared with Haryana, but Haryana can definitely be compared with Punjab. At this moment, I’m more concerned about how they manage Punjab,” he said.

Responding to a question, the CM said the Chief Minister Good Governance Associate in Haryana had nothing to do with any political organisation and the government does not pay them any salary.

Khattar further said the kind of reforms the present state government had introduced to ensure “Maximum Governance-Minimum Government” was considered impossible. “We may make mistakes, but our intent is never wrong. There is a need to distinguish between bona fide and mala fide intentions,” the CM added.

While launching a frontal attack on the Opposition claim over the discontinuation of the old-age pension of about 2.70 lakh beneficiaries in the state, the CM said, “The Opposition will never share the details about the number of new pension beneficiaries, they only talk about pension deductions. As many as 2.61 lakh new beneficiaries have been added in two years till March 2022,” Khattar said, adding that around 2.41 lakh people had died in these two years, their pension had been discontinued.

“For the first time, our government has also started giving the pension benefit of Rs 2,500 to the people suffering from serious diseases like cancer and HIV,” the CM shared.

He further said the 35th International Surajkund Handicrafts Mela would be held from March 19 and continue till April 4.

This time, Jammu and Kashmir would be the partner state, while Uzbekistan was the participating country.

“An e-ticketing system has been started for the convenience of the people visiting the mela. This time we have decided that two such melas would be organised in September and October month.”

Meanwhile, the CM said a state-level function would be held in Panipat on April 24 to mark the 400th Parkash Purab of “Hind di Chadar” Guru Tegh Bahadur.